How Much Do MotoGP Bikes Weigh? 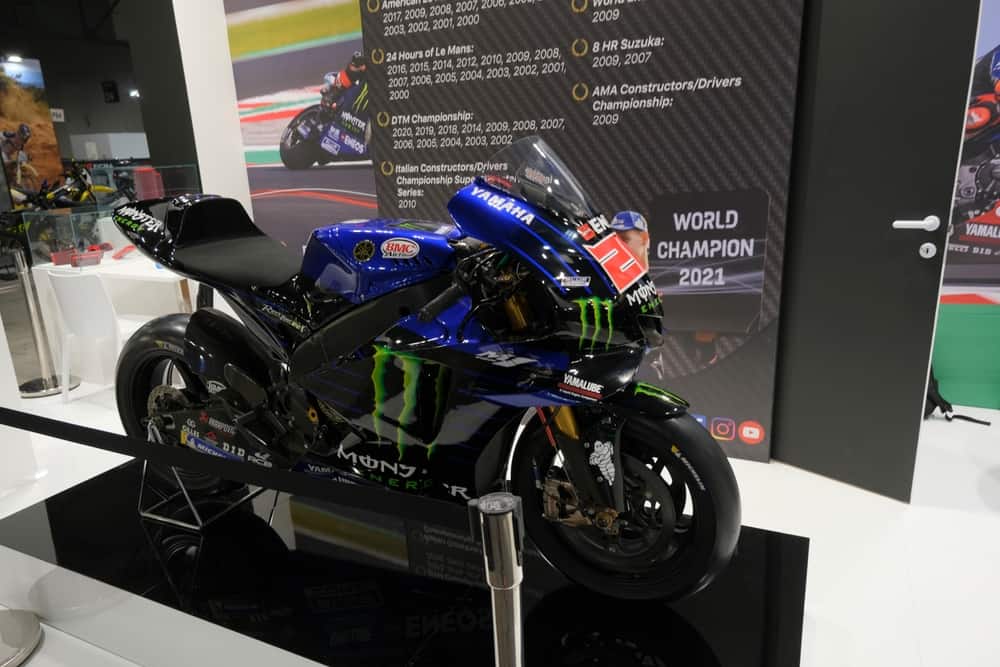 MotoGP, which is also known as Grand Prix motorcycle racing, is widely regarded as the most prestigious motorcycle road racing event held on road circuits. Many MotoGP fans have wondered about how much the rider’s bikes weigh and whether there are any weight regulations.

MotoGP officials set a minimum weight requirement for bikes based on the engine capacity of the motorcycle. Since current MotoGP bikes have a capacity of 1000cc, the bike needs to weigh a minimum of 346 pounds. This minimum weight only applies to the bike and doesn’t account for the rider’s weight.

If you want to find out why MotoGP’s minimum weight only applies to the motorcycle while lower categories have minimum weights, we’ll break down everything you want to know! Once we’ve looked at how much MotoGP bikes weigh and how this affects riders, we’ll discuss how the weight compares to that of other motorcycles.

How Much Do MotoGP Bikes Weigh?

In many racing sports, there are regulations regarding the weight of vehicles. For instance, let’s consider Formula 1 vehicles and MotoGP Bikes, which can both easily break the 236 mph barrier. In Formula 1 races, officials stipulate a maximum weight for the driver when seated in their vehicle.

This weight correlates to the cubic capacity of the bike’s engine. Current MotoGP bike engines have a cubic capacity of 1000cc. In 2005, when MotoGP engine capacity was restricted to 800cc, the minimum weight for a rider’s bike was 331 pounds (150 kilograms).

As the engine capacity of MotoGP bikes increased, so did the minimum weight of the bike. Generally, riders and their teams try to stick closely to the minimum weight, particularly for taller and heavier riders.

If a MotoGP bike fails to meet the minimum weight requirement for the bike alone, the rider could face disqualification. In the following section, we’ll discuss the importance of a motorcycle’s weight in MotoGP.

Current 1000cc MotoGP bikes have a minimum weight requirement of 346 pounds. As we explained, this minimum weight only applies to the motorcycle. Due to this, many fans have wondered about how a MotoGP bike’s weight impacts the rider.

Taller and heavier MotoGP riders often encounter more wind resistance. In turn, this can reduce the speed of the motorcycle. These riders also have a center of gravity higher than shorter or lighter riders. Due to this, taller and heavier riders are forced to learn the bike at greater angles than lighter riders. In some cases, heavier MotoGP riders are at risk of skidding their bikes.

With taller MotoGP riders, the wheel bears a heavier load than that of lighter riders. Ultimately, this is due to the wind resistance taller riders encounter. While this can be avoided by leaning forward, it may put the rider’s wrists at awkward and uncomfortable angles. Due to these factors, taller drivers often slow down considerably as races progress.

In the past, two of MotoGP’s taller and heavier riders – Marco Simoncelli (6 ft, 159 lbs.) and Valentino Rossi (5.9 ft, 148 lbs.) – petitioned for MotoGP to adopt a combined weight. Of course, this combined weight is used in Moto2 and Moto3. The reasoning behind this petition was due to the above-discussed factors.

These factors resulted in these riders’ weight and height slowing their bikes down and taking a heavier toll on their rear tires. Ultimately, this petition was unsuccessful, and MotoGP continues to set a minimum weight for the motorcycle alone.

How Do MotoGP, Moto2, And Moto3 Weight Requirements Differ?

In the previous section, we mentioned that Moto2 and Moto3 bikes have a combined minimum weight, which accounts for the motorcycle and the rider. However, many fans have wondered how the minimum requirements for these bikes differ from those used in MotoGP races.

As you can see from this, officials adjusted the weight requirements as engine capacity was increased. For Moto3 bikes, which have an even lower engine capacity of 250cc, the combined minimum weight for the bike and rider is 335 pounds (152 kilograms). Without the rider, Moto3 bikes generally weigh around 181 pounds (82 kilograms).

It’s clear that MotoGP bikes are not only more powerful than Moto2 and Moto3 motorcycles, but they also weigh more! While MotoGP bikes need to weigh at least 346 pounds, Moto2 bikes only weigh around 298 pounds, while Moto3 bikes are the lightest at around 181 pounds.

Ultimately, FIM officials will adjust the minimum weight requirements in conjunction with the engine capacity of the bike. The main difference between MotoGP and the lower categories is that MotoGP has more powerful motorcycles and the minimum weight only applies to the bike.

The weight requirement for bikes in MotoGP is determined based on the bike’s engine capacity. Due to the 1000cc capacity of the current MotoGP motorcycles, the bike must weigh a minimum of 346 pounds. Generally, riders and their teams try to stay close to this requirement.

Louis Pretoriushttps://onestopracing.com
Previous articleHow Many Races Are There In An F1 Season?
Next articleHow Much Power Do MotoGP Bikes Have?