How Much Do MotoGP Riders Make? 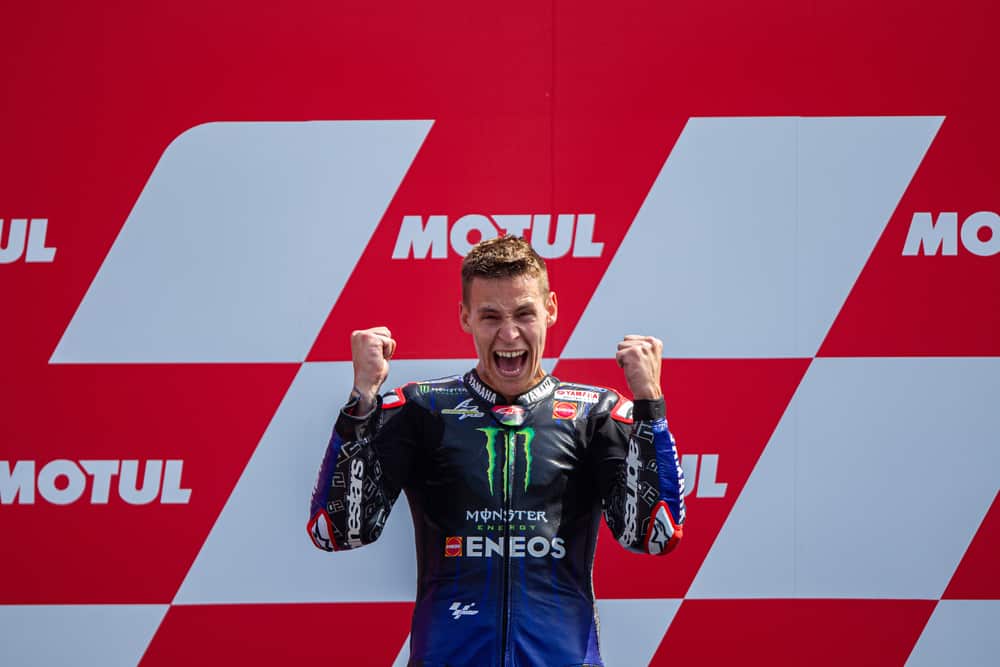 When anyone looks at the earnings of top sportsmen and women in any major sporting code, it is easy to look at the top earners and assume that all the participants earn high incomes. The reality in MotoGP is that of the thousands of aspirant riders, only twenty-two get to race MotoGP, and only four of these make it into the “big time.”

MotoGP riders make a base salary that ranges between $250,000 and $14 million with a per race increment which increases these salaries to between $283,500 and $15,750,000 (rider dependent) at the end of the season. In addition, riders can also make money from sponsors.

When you consider the lifestyles MotoGP riders live, consumed by travel, races, and training, it is surprising that only four riders of the twenty-two on the circuit earn $6 million and over.

Up-and-coming MotoGP riders who have shown they have the potential to finish on the podium and possibly win a race can earn between $1.000,000 to $6,000,000 in base salary.

A rider who recently graduated from Moto2 and a satellite or independent team is prepared to work with him may earn only $ 250,000-$500,000.

However, this is not the whole story; MotoGP drivers can earn money from several sources.

The MotoGP riders earn a guaranteed minimum salary of between $250,000 to $14 million, which is approximately 87% to 95% of their expected annual earnings.

For example, Marc Marquez receives a guaranteed minimum salary of $14,000,000, which makes him the highest earning rider and equals $750,000 for each race he rides in.

Until 2022 there were many “unpaid” riders in the MotoGP lineup, all of whom had to find their funding.

Unlike Formula One, where drivers with their sponsorships are expected to share proceeds with the team, MotoGP riders can use them for themselves.

To assist, drivers are generally offered some advertising space on the bike and other parts for their sponsor’s decals.

The positions they can use for their sponsors include.

As the riders begin to win races and their successes cause their profile to rise in the sport, their salary packages increase.

Of course, when this happens, the team will be less motivation to offer space on the equipment for the driver’s sponsors.

What normally happens is that the better-paid drivers are restricted to one spot on the rider’s racing suit’s chest.

By entering into sponsorship deals with smaller, less well-known brand names, the riders can charge a premium to sponsor a product.

For example, one of the smaller helmet manufacturers will pay between $630,000 and $750,000 for a top rider to sponsor their helmet, whereas better-known brands may only be prepared to pay half of the amount.

MotoGP riders have no prize money, but Moto2 and Moto3 riders earn. Riders in the MotoGP earn straight money from their races and contract deal with teams.

There is no public information regarding the payment of prize money for achieving notable targets; however, as this is publicly acknowledged for Moto2 and Moto3 riders, there is no reason to doubt that teams may have similar arrangements with the MotoGP riders.

Typical incentives would include

Some of the riders who finish in the top ten have contracts with their sponsors, which increase their earnings at year-end for winning Grand Prix.

The championship winner will earn a bonus for his sponsor as follows.

The Riders Get Free Medical Cover

Each team pays their riders the premiums for medical insurance cover, including on and off-track coverage.

The coverage provided by this policy provides care for injuries and illness on and off the track.

The Top Riders Get A Personal Assistant

When a rider makes it into the top league, additional benefits are made available, which include

The Team Pays For The Rider’s Travel Costs

It is only right that the team pays all of the rider’s travel costs to and from the event; however, if they manage to earn a place amongst the top ten riders, the quality and price of these travel perks will increase exponentially.

For the riders with the smaller teams, this may include a bump from economy to business class, and with the bigger teams, it may mean first-class flights or private jet travel with the team principal.

A summary of each of the rider’s 2022 earnings is listed below.

The Following Details A Summary Of Each Rider

The following lists the accomplishments of each of the eleven riders who earn a base salary of $1 million or more.

He is one of only four world champions who has won titles in three different categories.

Like Louis Hamilton in Formula One, Marc has broken many records, including

With these achievements, it is understandable why he is the highest-paid rider in the MotoGP series.

Until mid-2021, he spent five years as the works rider for Yamaha; however, for the 2022 season, he is riding for Aprilia.

Being so successful and so young has given him a bargaining position. The general impression is that he will achieve as much r more than the greats like Marc Márquez Alentà.

If a rider is at the top of his game, it is possible to earn considerable salaries on MotoGP. The younger drivers who have only entered the competition in the previous few years and who have not yet had the successes of legendary riders like  Marc Marquez and Maverick Viñales have some way to achieve top earning status.