How Much Does An F1 Car Weigh? 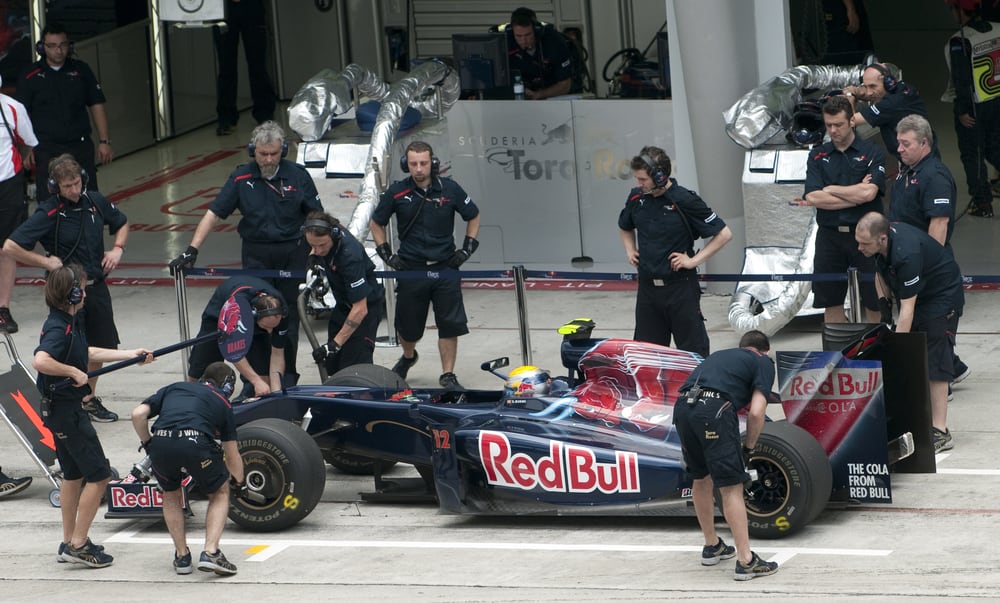 The level of detail which goes into formulating the regulations applicable to formula one every year is very detailed. The governing body doesn’t only look at the racing rules, safety protocols, or other more generalized actions but drills down to the smallest detail, which includes the weight of each piston in the engines.

The weight of the 2022 Formula One season car has increased from 749 kgs to 798 kgs. This weight limit caters to the many changes to the formula one cars that came into effect in 2022, particularly with the introduction of 18-inch wheels and the inclusion of substantial safety improvements.

Controlling the weight of a Formula One car is essential to the final results teams achieve on the track. Teams count savings in grams, and considerable effort is spent on reducing the weight of a car over the season; however, this activity has to happen within the minimum weight criteria set by Formula One.

F1 teams employ some of the best brains in the motor industry, constantly looking at ways to improve the cars and give themselves an advantage over the other teams.

They look at achieving these gains in several different ways, which include.

Despite commonly thought, F1 cars are not super slippery regarding aerodynamic efficiency.

In fact, quite the opposite, and with the new 2022 regulations in place and the move to allowing ground effect cars, the teams spend most of their research time looking at how to improve the downforce.

With increased downforce comes more drag, which has a cost in terms of top speed.

The downforce, however, plays a massive effect on the car’s performance in the corners and how fast the drivers can move through twisty circuits.

It is demonstrated by the difference between the 2022 Red Bull Racing RBPT and the 2022 Ferrari. While the Red Bull car has a clear speed advantage, on most tracks, it is Ferrari that could have carried the day. On a separate note, the leaderboard doesn’t reflect this because Ferrari has had embarrassing reliability issues.

In 2022 the Red Bull Racing RBPT will be the most powerful on the field, and this show on tracks with long fast straights where downforce is not as important as the short and twisty circuits.

Slowing down from very high speeds becomes a racing advantage if the driver can start stopping later than his opponents.

The weight of a formula one car is a significant factor in the overall competitiveness of the vehicle.

On a circuit like the Spanish one in Barcelona, it is said that one-kilogram saving will increase the track time by 3/10th of a second.

On a race that takes 55 laps to complete, that equates to

Consider that at the end of the recently run Paris grand Prix (Circuit Paul Ricard), the difference between 1st and 3rd position was 16.495 seconds. If the following teams had been able to find 1 kg of weight saving, they would have been first.

What Are The 2022 Weight Regulations

The changes were brought about by the rule change, which applies to the 2022 season.

The weight changes result from the following modifications to the 2022 car.

From 2022 the cars are allowed to use to generate downforce by creating ground-effect. The floors are aerodynamically designed to create a suction underneath the car, which pulls it towards the road.

These floors have added some weight to the car.

The wheels used by F1 cars have increased from 13 inches to much bigger (and heavier ) 18-inch rims.

The 2022 car chassis have been significantly re-engineered and is designed to protect the driver in more severe crashes.

These changes have increased the car’s weight.

How Are The Weight Regulations Applied

The regulations which F1 teams have to follow are incredibly long and complex and include everything from.

Within the major categories, the weight restrictions are drilled down to very small details; for example, the following are regulated within the engine weight categories.

How Do The Regulations Affect The Driver

There are strict weight controls on the driver, which particularly impacts the overall vehicle weight.

The weight limit is the minimum value that each driver can weigh. The reason this is imposed is to prevent the teams from trying to recruit drivers who may weigh less and therefore give them an advantage,

The regulations stipulate that the driver must weigh no less than 80kgs at the end of the race; they can lose between 2kgs and 4kgs during a race, and the weight has to be carefully managed.

As very few (if any) drivers weigh 80kgs or more, the teams have to compensate by installing ballast in the car to ensure that the difference in driver weight causes no competitive advantage.

The ballast is not allowed to be used strategically by changing the weight and balance ratio of the car and must be installed in the cockpit.

The height, weight, and ballast the relevant teams have to install in the cars to bring them up to weight, are listed below.

How Much F1 Cars Have Weighed Over The Years

Since the 1960s, when weight limits were first introduced in Formula One, the maximum weight has tracked steadily upwards.

In the 73 years in the interim, the F1 cars permitted weight has almost doubled from 450kg to 798 kg.

The changes have generally been made as a result of the following factors.

The Formula One teams have very little “wriggle room” when it comes down to looking for a way to achieve lower car weights or any other performance enhancement designed to give them a competitive edge.

Tolerances and changes are measured in micro units and the advantages in 100th of seconds; however, as the difference in qualifying times is sometimes a 100th of a second, every gain they can achieve works in their favor.

Louis Pretoriushttps://onestopracing.com
Previous article
Do MotoGP Bikes Have Traction Control?
Next article
How Much Does It Cost To Run A MotoGP Team?