How Much Does It Cost To Run A MotoGP Team? 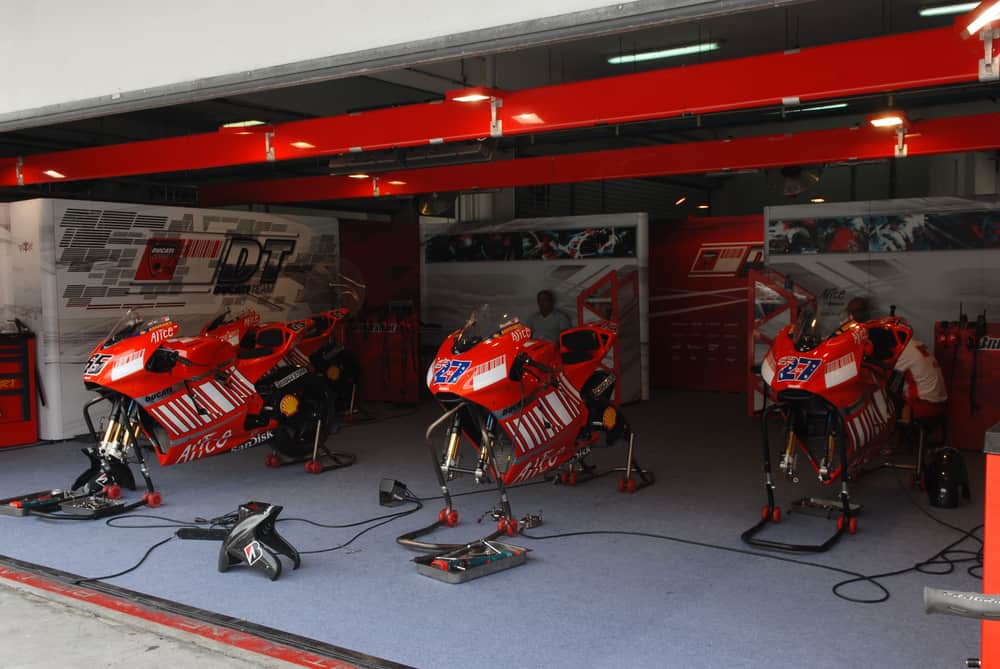 There is something very emotive about the sound of a  MotoGP race, particularly watching the sheer bravery of the drivers simultaneously. The sport is seeing a revival in popularity, and viewership figures show very positive growth.

It cost $7 million and $35 million (including the cost of the drivers) to run a MotoGP team with two riders in the current era. While these costs do not compare with the massive expenses associated with Formula One, they are still very high and represent a substantial barrier for new entrants.

Have you ever wondered how expensive it is to run a MotoGP team? The figures are presented in this article. When the teams travel to twenty different destinations across four continents during a season, keeping the bikes in optimal condition and ready for each race, it is a remarkably cost-effective sport compared to the likes of Formula One.

How Are The MotoGP Teams Structured?

Fédération Internationale de Motocyclisme (FIM) is the governing body of MotoGP and Superbike  motorbike racing, and the economic rights are held by Dorna Sports.

There are two categories of MotoGP teams.

The factory and satellite teams competing in 2022 include the following.

The theory is that as the factory teams have access to the latest equipment, the best engineers, the most successful driver, and the biggest budgets, they will always outperform the satellite teams.

What Are The Costs Of Run A MotoGP Team?

The are several expenses that a MotoGP team will incur, as follows.

There are three levels of bikes available to MotoGP teams. Whatever the bike level, they have to produce massive levels of performance (top speed 356 km/h ), 0- 60 mph time of 2.6 seconds, and the ability to brake from extreme speeds while remaining fully controllable.

The bikes may seem similar to an average high-speed road bike from a distance, but nothing could be further from the truth.

Each bike is essentially a prototype, one of a kind, built in very small numbers for a season.

All of the bikes are handmade and designed around the rider, making the build’s labor component very expensive.

Even if it is an older bike ridden by one of the satellite teams, it is still hand-built to exacting standards.

The satellite teams lease their bikes from Dorna Sports, with a full backup and maintenance service for the year.

These bikes are leased and so are never owned by the teams. The lease costs provide two complete motorcycles per annum.

They consume  24 liters of fuel a race and, as part of the lease, get 12 engines per season and enjoy unlimited testing.

Works teams are bike manufacturers and provide their equipment.

The bikes driven by each of the factory teams are

The factory team’s bikes will cost anything from $4 million up.

The factory teams use 20 liters of fuel and are allowed five engines annually.

They are not permitted to do any engine development and are only allowed limited testing during the season.

They run on hard and medium compound tires that Bridgestone supplies.

Dorna Sports specify several components, and the replacement parts are very pricey; some examples are.

Rider salaries vary from a low of $250,000 (an untested rookie) to a maximum of $20 million per annum for an established “name brand” rider like Valentino Rossi.

The rider’s salary can come from three different sources, as follows.

The factory teams pay their riders and generally have the most successful riders working for them.

The satellite teams pay their riders from one of two sources.

A wage bill of $2 million per annum would be a reasonable estimate for a mid-level team.

MotoGP is run in over 20 events in 20 countries across four continents. Even though there are many races run in certain countries, they are not held successively, which means expensive travel costs for each race.

The 2022 travel schedule is as follows.

The average travel costs per event are approximately $1,500 per team member each trip.

With twenty trips in a season, a team of thirty costs $45,000 per trip. This figure does not include the team principal, senior staff, and riders who will travel in a higher class or in a private jet.

Being generous, let’s assume that the senior staff travel costs only three and a half times more than the rest of the team. Their costs would be $5,250 per member per trip.

Over a season consisting of twenty races, the travel costs are $1,32 million per season.

The Hospitality Box And Catering

Keeping the staff fed for the duration of the event and dignitaries and sponsors entertained to a requisite level could cost up to one million dollars for the season.

So, What Is The Total Cost To Run A  MotoGP Team?

How Does The MotoGP Controlling Body Make Money?

MotoGP’s economic rights holder, Dorna Sports, is responsible for the health of MotoGP. In the 2020 year of account, Dorna sports made the brave decision to continue running the series through the pandemic.

They knew it would be an expensive exercise but felt it was critical to keep the level of growing interest in the sport.

It resulted in Dorna Sports making a ninety-four million dollar loss during that period.

MotoGP has several revenue streams, which include

The global viewership of MotoGP has exploded upwards to more than 40 million people in the last two years. While this is just under 40 percent of the more than Formula One 108 million people,  the audio-visual rights make up 66% of the sports revenue.

Through the pandemic, revenue from this source dropped by 35% from the previous year.

No 2 – Fees From Promoters And Tracks

Each MotoGP racing venue worldwide pays to host a MotoGP event; in turn, the circuit(or promoter) receives the takings at the gate.

Advertising revenue accounts for just over 20% of MotoGP’s revenue.

Through the pandemic, revenue from this source dropped by 14% from the previous year.

Revenue from the provision of television services accounts for approximately 8% of MotoGP’s revenue.

Through the pandemic, revenue from this source dropped by 15% from the previous year.

Approximately One million dollars is earned from an item termed logistical services.

Through the pandemic, revenue from this source dropped by 68% from the previous year.

How Does MotoGP Compare To F1 Running Cost?

With the cost caps imposed in Formula One, how comparable are the costs to run a team in both disciplines?

The difference in available budget boils down to the TV viewership and, therefore, the revenue from TV rights of each sport.

The following shows how this compares.

While the total budgets needed to run a top MotoGP team compared to a Formula One team are markedly different.

A top works MotoGP team can expect to pay $15 million for one year, whereas Formula One teams work within a cost cap of $140 million.

While Formula One is responsible for a disproportionate cost compared to MotoGP, if you divide the total costs of each team by the horsepower that each engine develops, the figures are a little more comparable.

Unfortunately, that is the only place where they compare.

Running a MotoGP team is not for the faint-hearted or someone with shallow pockets, and while it is cheaper than a Formula One team, it is still a very expensive exercise.

The upside is that the fan base is growing, and in recent times the tracked viewership figures have exceeded 40 million, which means sponsorship money is increasing, which should ease some of the burdens on the teams.

Louis Pretoriushttps://onestopracing.com
Previous article
How Much Does An F1 Car Weigh?
Next article
Why Don’t MotoGP Bikes Have Starters?