How Much Power Do MotoGP Bikes Have? 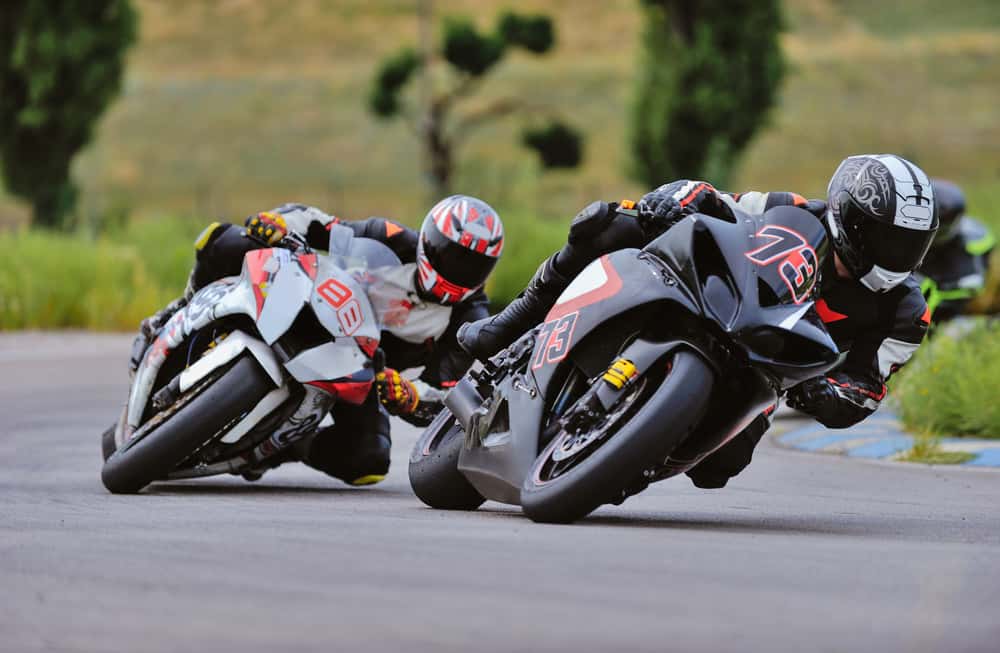 Grand Prix-style motorcycle racing has been around for well over 100 years. The MotoGP race in its current regulated form was introduced in 1949 with the rules and regulations of the International Motorcycling Federation (FIM) governing various aspects of the sport, including engine performance.

Modern 1000cc, 4-cylinder MotoGP prototype motorcycles produce around 240 bhp (brake horsepower) maximum with over 120 Nm of torque at 8,750 to 12,250 rpm enabling them to reach in excess of 225 mph/362 kph. This performance is reached through painstaking data analysis and fine-tuning.

MotoGP technology, similarly to Formula One (with the exception of turbocharging allowed in F1), is edging ever closer to reaching a milestone of 300 horsepower per 1000cc of engine displacement. This power density is far higher than that reached by any production vehicle that does not use a turbo. How are these power ratios developed, and what are the rules that determine engine design?

MotoGP, The Birth Of A Racing Legend

Since its inception with the historical establishment of the Federation Internationale de Motocyclisme (FIM) in 1949, motorcycle championship racing was classified into 125cc, 250cc, 350cc, 500cc, and 600cc sidecars, with the first official race held at the world-famous Isle of Man TT venue.

Italians dominated the 500cc class throughout the 1950s right up to the mid-1970s, winning the title no less than 26 times. Norton, NSU, Suzuki, and Honda featured at the top in the other championship classes.

In the early 60s, East German manufacturer MX produced a 200 bhp two-stroke bike that proved more than a match for the more established teams in the 50cc, 125cc, and 250cc classes until their legendary race winner Ernst Degner defected to Suzuki and imparted his 2-stroke technical know-how on the Japanese manufacturer.

By the time the 1970s swung around, Japanese Hondas, Yamahas, and Suzukis dominated, incredibly winning all the titles until 2007 when Casey Stoner stole the title on his Italian Ducati. Honda led from the front of the pack in the 500cc class throughout the 90s, with Valentino Rossi winning his first championship title in 2001. The following year saw the birth of the MotoGP brand.

Four-stroke engines were reintroduced, and engine capacities were changed many times until the 1000cc class was settled in 2012. Michelin took over as the official tire supplier from Bridgestone, and the early to mid-2000s saw the playing field leveled with the introduction of new hardware and software developments.

Where Are MotoGP Engines Today?

Without rules to govern safety, the development of power is almost limitless. So, to understand what makes MotoGP bikes the beasts, it is important to look at the regulations that determine how they are allowed to perform on the track.

The Motorcycle Grand Prix has undergone much evolutionary change in its 70-year history to produce its current configuration. Today there are principally four classes, MotoGP (1000cc), Moto2 (765cc maximum), Moto3 (250cc), and even an electric variant, the MotoE.

MotoGP bikes are not restricted by engine configuration, and both two-stroke and four-stroke engines are permitted. The advantages of 4 cylinders, as opposed to 2, are obvious in terms of overall power, but the resulting power-to-weight ratio is dampened by the GP commission’s bike weight restriction of 298 lb to 364 lb, dependent on the number of cylinders.

No wonder then those riders tend to be lightweight, coming in an average of 147 lbs. Fuel capacity per race is also limited to 5.8 US gal, and the 4-cylinder bikes tend to provide the best ratio between power, weight, and fuel consumption.

Differences Between MotoGP And Road Bikes

What makes MotoGP bikes so special? According to Corrado Cecchinelli, MotoGP’s Director of Technology, there is not really all that much that separates MotoGP bikes from the top-of-the-range road bikes of today. In fact, he argues that if you mounted the slick MotoGP tires on a standard sports road bike, you would have something that very closely resembles the real deal.

These high-performance tires, illegal on road bikes, are what give the bike a leading edge. They operate at their peak when reaching a high temperature and are the reason you can see these machines cornering the way they do.

MotoGP bikes are stripped down to the basics to keep the weight down. Visually, they do not have headlights, indicators, and brake lights. Only rain lights are fitted to the back to increase visibility. There is no side stand fitted, and a starter motor is considered unnecessary. The lack of a muffler is what gives them that deafening roar.

The brakes used on the bikes are an important feature. Made of carbon, they make a big difference in stopping power. Their downside is that they are not very effective when they are cold. A seamless gearbox ensures that gear changes are quick and smooth; in fact, two gears are engaged simultaneously for a fraction of the time between gear shifting.

MotoGP and road bike engines are conceptually the same. They are just bespoke designed engines that are very finely tuned for peak performance. Suspension systems are the same, too; the racer’s suspension systems use better hydraulics and are made from lighter materials.

The electronics systems deployed are more advanced than road bikes but have less functionality. Features such as ABS, electronic suspension, and stability control are done away with. Instead, these advanced electronics set the engines apart from the road production variety.

Carbon fiber is used in the chassis, delivering strength and reinforcements where necessary, providing a positive stiffness-to-weight ratio due to the lightweight materials used. Designed for riding on smoother surfaces, these materials are definitely not ideal for use on road bikes.

Is There A Road Bike That Compares?

There are many superbikes today that are worthy of comparison to the MotoGP variants. MotoGP 1000cc engines are capable of revving to 16,000 rpm, with the piston traveling up and down 250 times per second!

A notable contender is the Yamaha YZF-R1M. Sporting a 6-speed 4-cylinder 998 cc inline engine, this beast comes with many advanced engines and other technologies borrowed from MotoGP bikes and is not easy to get your hands on.

Still not a patch on its MotoGP counterparts, it produces 200 bhp at 13,500 rpm and is more than a match for any other superbike you are likely to encounter on the road. It has a claimed maximum speed of 186 mph.

MotoGP motorcycles are set apart from the rest by the multitude of onboard sensors, gyroscopes, and accelerometers. The data allows the mechanics and technicians to adjust and fine-tune these machines to operate at their optimal range, ensuring that they produce the peak power required to make them race winners.

Louis Pretoriushttps://onestopracing.com
Previous articleHow Much Do MotoGP Bikes Weigh?
Next articleWhat Does Flag To Flag Mean In MotoGP Racing?