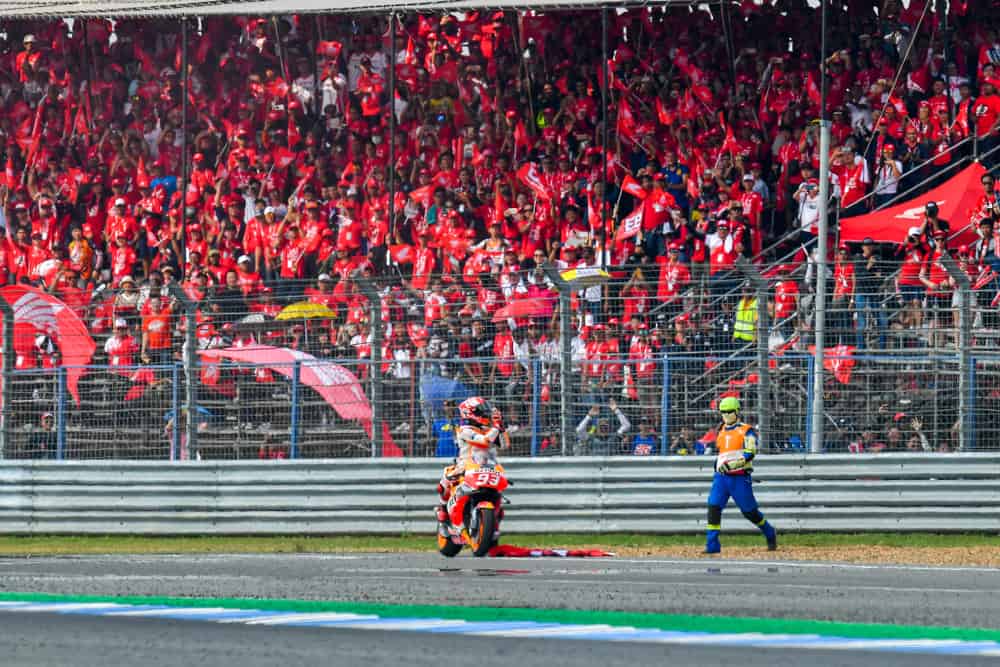 With all the new methods of viewing and excessing information about MotoGP, assessing the sport’s popularity is made easier, but the results are also more varied. Therefore, the questions regarding the popularity of MotoGP differ from one source to another; nevertheless, we can still deduce what the latest trends are.

As of 2020, the number of fans accessing the MotoGP website dropped by more than 20%, which is quite alarming as the F1 one rose with almost the same percentage. However, according to NBC, around 60% of MotoGP fans are between the ages of 18-44, meaning a possible increase in future interest.

Previously, there has been a drop in the general interest in MotoGP as the website had more than 2 million fewer visits than usual during the beginning of 2020, between March and May. Still, the question regarding its continuous loss is a far more complex situation to evaluate. So, is MotoGP continuously losing viewers, and is their media interest fading?

Is There a Decline Of Interest In MotoGP?

When comparing the general activity of major media outlets, MotoGP has lost general interest due to major changes where the general public is concerned. Most interests concerning the MotoGP were generated through specific riders who are, unfortunately, no longer competing.

Famous sportsmen and women are significant components that foresee filled seats and continuous support, therefore, with the previous absence of Marc Marquez and the retirement of Valentino Rossi, a lot of interest was lost, and viewership declined. For example, Valintino had more devoted followers and a more prominent media presence than the whole of MotoGP.

In addition, MotoGP also released a documentary series with the hopes of achieving the same success F1 did with theirs, but a second season was put on hold due to poor viewing ratings.

All of the mentioned misfortunes might give the impression that MotoGP is losing popularity. However, the opposite is happening on other vital media platforms as the institution is reaching new record-breaking heights.

Within the time frame of a year, MotoGP has gained more than a 30% increase in its broad fan base, from 30 million fans to 40 million across various platforms, including Instagram, Facebook, and Youtube.

It’s worth mentioning that MotoGP only recently started going the extra mile to generate media interest which one could argue is a sign that they needed to, due to a lack of it. For example, in June of 2022, MotoGP conducted its most extensive survey to date and received feedback from more than 100,000 fans in more than 170 countries.

It’s no coincidence that MotoGP decided to commission the survey, which was hosted and analyzed by Motorsport Network and Nielsen Sports, respectively, shortly after a major dip in the public’s general interest.

Although MotoGP lost a bit of interest in the previous years, there is no indication that they are continuously losing popularity; in fact, the survey reveals some positive news.

What Did MotoGP’s Survey Reveal About Their Popularity?

Conducting the largest survey MotoGP has ever done was quite a stressful venture. Still, they proudly declare that their fan base is highly devoted and shares insightful information that will benefit the institution’s future.

Concerning the devotion of MotoGP’s fan base, more than 80% of the fans that took part in the survey have been following the sport for over six years, the highest rating ever recorded by the Motorsport Network. Furthermore, approximately 80% of the fans watch at least 15 races per season.

The current MotoGP fans also had no problem taking the time to complete the survey as more than 27 000 hours were invested by them collectively, meaning individuals invested, on average, around 15 minutes to complete it thoroughly.

As a result, MotoGP has a strong dedication from its current fans, but what does the future hold?

The survey data indicated that MotoGP is attracting a lot of female fans. Of all the female participants in the survey, nearly a third of them have been following the sport for almost five years. Furthermore, most women (more than 50%) are between the ages of 16 and 34, whereas only 40% of the men who participated are between those ages.

Therefore, not only is MotoGP attracting a younger audience, but most of them are female. Carmelo Ezpeleta, the CEO of Dorna Sports, commented on this particular aspect of the survey and mentioned that they are “delighted” about the increase of interest among the female fan base and intend to “open the doors as wide as possible” as their mission is to continue growing their audience.

Although MotoGP is proud to reveal the result about their fans and public interest, a disconcerting percentage of the survey participants (more than 60%) mentioned that MotoGP needs to do more to increase interest and attract new fans.

What Are MotoGP’s Plans To Increase Popularity?

Included in the survey were some goals and visions MotoGP has for the future that they wanted to test among their fans as a means of keeping the current viewers engaged and hoping to attract some new ones.

Included in the future plans are new rules that will benefit the less competitive manufacturers in order to create a more balanced competition resulting in a more enjoyable viewing experience.

In addition, MotoGP also wants to start using sustainable fuels as part of a green initiative; however, there was a stronger interest in the balanced rules than sustainable fuels, although the research clearly indicates that MotoGP will benefit from investing time and recourses in both.

Regarding popularity, over 60% of the fans voted the Italian GP at Mugello the most enticing and important race and Fabio Quartararo the most popular racer, especially among the young female audience.

Moreover, the Monster Energy Yamaha team is the most liked, although only slightly more so than the Ducati Lenovo team.

James Allen, the president of Motorsport Network, mentioned that a fan survey of this magnitude and scale has never been done before, indicating many new possibilities and opportunities for the sport.

In the years to come, we will see a lot more media coverage on the most popular racers and teams to attract new fans. As for the races, new rules will foresee a much more enjoyable viewing experience as it will be more competitive.

Although there was a recent dip in the general interest in MotoGP, they have gone to great lengths to understand their current audience and attract new ones. MotoGP is showing great improvement and has already obtained a 30% increase in their general fan base, which reveals that they are not losing popularity despite a previous dip in interest.