Is Rain Good For F1 Races? 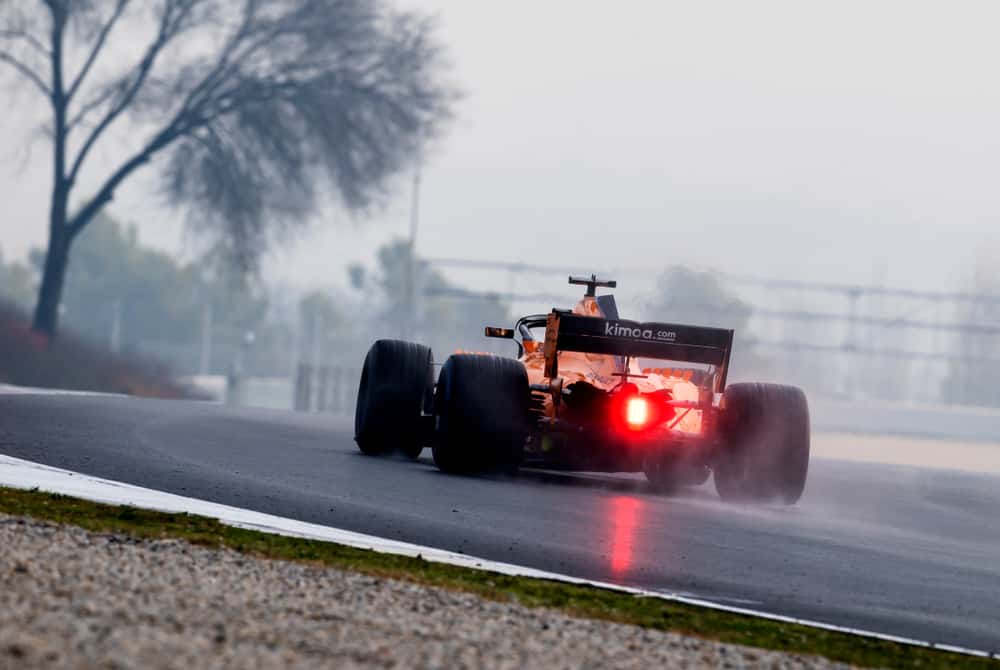 During the weekends, F1 teams closely monitor the weather regularly, as different weather changes such as temperature, humidity, and rain can play a role during the sessions, so anticipating these events is crucial. That makes me wonder, is rain good for F1 racing?

Rain is good for F1 races as it makes for more exciting and close racing. Rain makes a difference in the performance of the cars, so drivers’ skills prevail over their machines as they race in similar conditions. Therefore, when it rains, there are always surprises and unexpected results.

However, excessive rain is also not good, as it can be dangerous for both visibility and car control, so it is common that races are suspended or paused when it rains heavily. Let’s take a bit dive and find out all about F1 racing in the rain.

How Rain Influences An F1 Car

Rain dramatically affects many aspects during F1 races, both on the track and the cars and their handling.

The rain reduces the grip on the track as the tires do not adhere to it and are dry, causing a significant loss in traction for the car. Because of this, the cars are more challenging to drive, so it is common for drivers to lose control and spin or lock the brakes more easily due to the aquaplaning effect. The loss of grip also causes cars to slow, making lap times much slower.

Aerodynamics are also affected. With the wet and lower speeds, the rear wing does not work very well, which results in less downforce and more difficulty to turn. For this, teams try to increase downforce through adjustments to the angle of the front wing. Teams can also change the ride height to make driving easier for drivers.

Rain also affects visibility due to the sheer amount of spray that F1 cars push out behind them, reducing it noticeably. The more rain there is and the wetter the track, the less visibility there is and the more spray the cars release, which is very challenging and dangerous at the same time.

There have been occasions when visibility has been almost zero, so the drivers have had to rely on their instincts and knowledge of the circuit to avoid crashing into the walls or other drivers.

Why Rain Is Good For F1 Racing

F1 races in the rain are more fun as usually more things happen and are more unexpected, whether it’s raining from the start or it starts to rain mid-race.

In the wet, cars are more challenging to control, so the performance differences between faster and slower cars are reduced, and drivers’ skills become more critical. Also, as driving is more challenging, drivers make more mistakes, and it is more common to see spins or accidents.

The point is, all of this makes for a lot more overtaking during a wet race. The equalization of performance in the cars and the more challenging conditions mean that there is a constant dance of positions. In a dry race, it is impossible (unless a big accident occurs) to gain more than 9 positions in a single lap, while in the wet, it is possible.

This also has a massive influence on qualifying because if a driver with a midfield car is talented in the rain, he can easily get pole position, which would be very difficult in the dry. All this means that there are many surprises in the results both in the race and in qualifying, making it more likely to see backmarkers at the top of the grid and vice versa.

However, rain can also be a double-edged sword. If it rains excessively or the track is too wet, the race is paused until the weather improves or it is permanently suspended, as the conditions can be too dangerous to drive.

This happened during the 2021 Belgian GP, in which the race was suspended after two laps behind the Safety Car due to excessive rain that impeded visibility.

Do F1 Cars Use Different Tire Compounds When It Rains?

F1’s current tire supplier, Pirelli, provides both wet and dry tires, so F1 cars use different tires in the wet.

Depending on the characteristics of each track, Pirelli selects three of these five compounds (For example, C2, C3, and C4), which we will call hard, medium, and soft in each race. During the race, making a pit stop and changing tires is mandatory.

On the other hand, full wet tires are marked blue, are the most effective for heavy rain, and have been designed to increase resistance to aquaplaning, giving the tire more grip in wet. Unlike in the dry, if the race starts wet, there is no need to make a pit stop to change tires.

Both intermediate and full wet tires are too hard to run dry, so they are very slow compared to the rest, and the idea is to make a pit stop and change to dry tires if the track is drying to avoid wasting too much time on track.

How Do F1 Drivers See In The Rain?

Visibility in rainy conditions depends on how hard it is raining and whether or not you have cars in front of you. There is no problem with visibility when there is light or medium rain and no one in front of you. However, visibility is drastically reduced if you have a car in front of you due to, as we discussed earlier, the sheer amount of spray that F1 cars push out behind them.

And if there is heavy rain, visibility is further reduced, reaching the point where drivers can see practically nothing. Wet tires can evacuate 85 liters of water per second per tire at 300 km/h, while intermediates evacuate 30, so a lot of water will go directly to the car behind.

For this reason, many races are suspended, as it is too dangerous to continue running. To improve driver visibility, helmets have chemicals to make the droplets disperse, and airflow can quickly move the water on your visor. Tear-offs on visors can be a massive help, too, as that can allow for brief moments of clear vision.

When following directly behind another car or a pack of cars, the only thing a driver would be able to see is the flashing red rain light on the rear of the cars ahead, making it a great reference to know where the rest of the cars are.

How Much Slower Are F1 Cars In The Rain?

As we discussed before, the loss of grip and traction caused by the rain makes F1 cars go slower, as the tires do not adhere to the track as well as in the dry, but how much slower are they in the rain?

There is nothing better than comparing wet and dry lap times and average speeds to find out. Let’s take the 2016 Brazilian GP, for instance. Lewis Hamilton took pole position in the dry with a time of 1:10.736, while in the race, in heavy rain, Max Verstappen set the fastest lap on wet tires, with a time of 1:25.305.

The previous example was with torrential rain and wet tires. We will take the 2021 Turkish GP to see the performance in medium rain and intermediate tires. Pole position for that GP was achieved by Lewis Hamilton, with a time of 1:22.868 and an average speed of 231.98 km/h (144.15 mp/h) in dry conditions.

The race was in wet conditions all the time but not wet enough to use wet tires, and the fastest lap was set by Valtteri Bottas, with a time of 1:30.432 and an average speed of 212.58 km/h (132.09 mp /h). There is not as big a difference as in heavy rain, but still a significant difference.

So, depending on how much rain there is, F1 cars can go 7 to 15 seconds slower per lap than in dry conditions, which is a considerable amount of time on circuits as fast as Brazil or Turkey.

How Common Is Rain In F1?

We’ve talked about racing in the rain and its pros and cons, but how common are they?

The Formula 1 race calendar starts in March and ends in December. Each Grand Prix takes place in a different part of the world and has an assigned weekend, so it is impossible to predict how many wet races there may be during the season because it is arbitrary.

There are seasons in which it rains more, while there are others in which there are hardly any wet races. However, we can look back to see how common wet races have been throughout history and thus approximate how common rain is in F1.

The EverybodyWiki website offers a list of all wet F1 races from 1950 to 2018, with the percentage they have meant each season. We have made an average of all the seasons, with a result of 15.16%, so we can say that it is not very common for rain in F1.

Rain is generally good for Formula 1 races, as they offer more entertaining and intense races because the more challenging conditions mean that the difference in the performance of the cars is reduced and that the drivers make more mistakes, which produces more overtaking.

However, it can be negative, as excessive rain or standing water on the track can make conditions too dangerous to race; thus, the race may be suspended or paused.