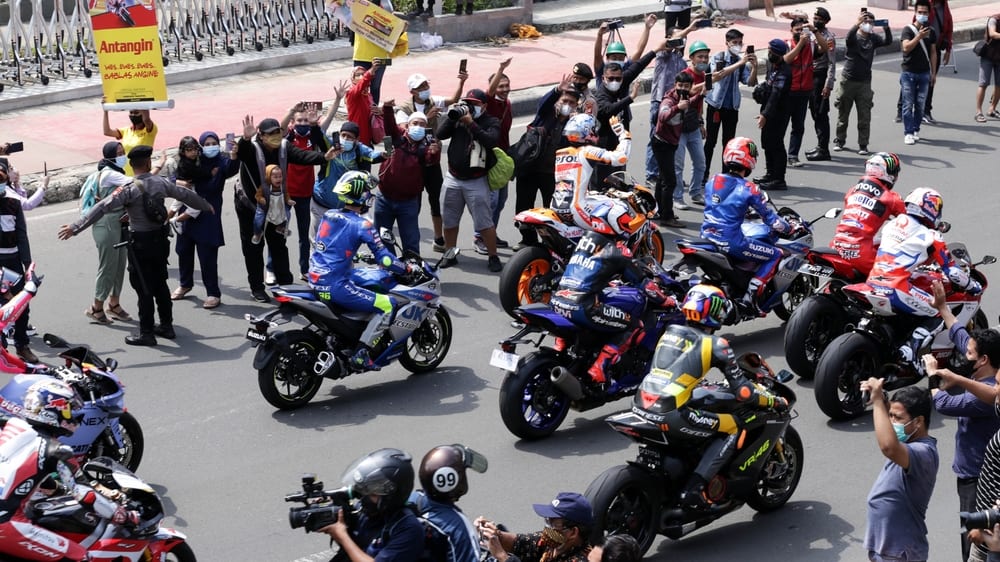 The 2022 MotoGP power-to-weight ratios range from 0.73 hp per pound  (Aprilia RS-GP) to the Ducati Desmosedici GP at 0.84 hp per lbs. All this power comes from an engine bolted onto a two-wheel bike which weighs approximately 346.1 pounds (157 kilograms).

During the 2022 season, riders have access to 7 engines, meaning an engine has to last for three races. While that does not seem particularly problematic, it is worth considering that, at full speed, each piston is traveling up and down seventy-five times a second!

The following list compares the power-to-weight ratio of six MotoGP constructor bikes in 2022. It is important to understand that no manufacturer publishes their MotoGP bikes’ rated horsepower and generally states that they are “More Than” a certain value.

The HP figures listed below (particularly for Ducati) are estimated and provided by MotoGP journalists and engineers.

The 2022 performance by each constructor’s MotoGP bikes achieved is shown below.

The results, compared to the power-to-weight ratio of each bike, are.

It makes it clear that the whole MotoGP package, and not just the raw power to weight advantage, makes a bike more competitive.

What Is Power To Weight Ratio?

Calculating the power-to-weight ratio of any vehicle allows an objective comparison of the actual performance of different vehicles, irrespective of the engine’s horsepower or the vehicle’s size.

It then provides one metric that gives spectators an overview of the different power ratios.

These figures demonstrate that a MotoGP bike has a 26% higher power-to-weight ratio than a Formula One Car.

How Does A MotoGP Bike And A Formula One Car Compare?

Power to weight advantages only plays out in the lower speed regimes, for example, under 100km/h. Beyond that, dynamic advantages have a much larger influence than minor power or weight differences,

The list below highlights the impact of MotoGP bikes’ higher power-to-weight ratios over a Formula One car.

The above shows that the higher power-to-weight ratio provides an acceleration advantage at lower speeds.

Once 100 mph has been exceeded, the vehicle’s aerodynamics begin to play an increasingly more significant role.

Two problems arise when comparing MotoGP power to weight ratio: the manufacturers don’t publish the official horsepower ratings. Secondly, this is not the only metric that defines how competitive a MotoGP bike is compared to the rest of the field.

While it is essential for the MotoGP rider to get down the straights as fast or faster than the other competitors, the ability to brake and reduce speed for the corners and the MotoGP bikes balance through the corners, are arguably more important.

Louis Pretoriushttps://onestopracing.com
Previous articleHow Much Do MotoGP Riders Make?
Next articleDo F1 Drivers Have To Pay To Drive?