This Is How F1 Cars Change Gears 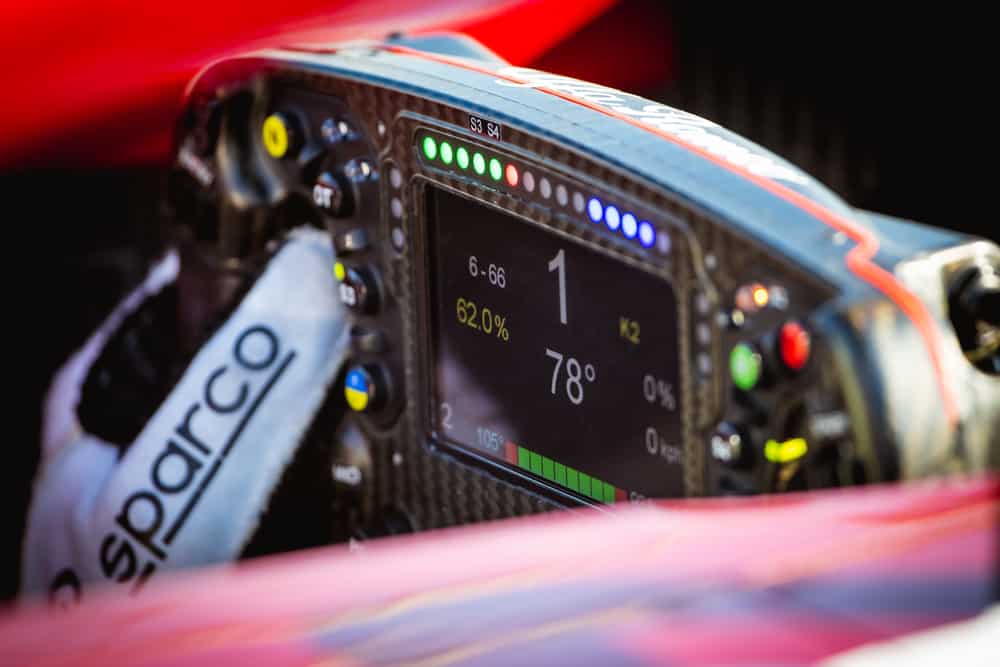 My first close-up of an F1 car was in Punta del Este, Uruguay. The air was electric with excitement and the all too familiar wailing of the F1 engines screaming through the city streets. As a car-obsessed petrol head, I would count the gear changes until it was just a blur of sound. The speed at which the gears change is incredible. Of course, not knowing too much about F1 cars’ gearbox, I wanted to know everything I can and this is how F1 cars change gears.

F1 cars change gears through a semi-automatic sequential transmission. The onboard computer changes gears on behalf of the driver. Gear selection is made through a paddle situated behind its steering wheel, and the driver can select the left paddle to shift up or the right-hand paddle to shift down.

The high speeds and velocity at which F1 cars drive will need an extraordinary transmission. Unlike a high-performance road sedan or even a modified street car will use either an H-style transmission or a stick shift system. Typically, the gearbox will consist of a main and layshaft, the clutch, and a selector mechanism.  Gears on the layshaft rotate with the gears on the main shaft, and these gears are directly engaged.

How Do F1 Cars Change Gears?

As briefly mentioned, the gear changes on an F1 racing car are very different from that of your standard sedan. Since the gear changes are so fast, no human driver would have the reflexes needed to change the gears at the right RPM smoothly. An F1 car engine generates around 15 000 RPM, which is a very high rotational speed, whereas your typical car operates at about 6000 to 9000 RPM.

Let’s look at the way the gears are changed;

The F1 driver will initiate the gear shifts through paddles that are mounted behind the steering wheel, similar to those found in paddle shift option sedans. The computer uses sensors and hydraulic actuators to perform the actual shift, which is also accompanied by an electronic throttle control.

Usually, there would be a time gap between engaging the paddle and the actual gear change taking place. In F1 cars, the help of computers makes that gear change possible in under 50ms. That is especially helpful since all F1 cars have a 7-speed transmission longitudinally-mounted; each gearbox must have a reverse gear.

How Does A Formula 1 Gearbox Work?

A critical factor in F1 gearboxes is heat dissipation, so the gearboxes are constructed from carbon titanium. The gearbox is typically bolted onto the back of the engine. The gearboxes of F1 cars since 2014 have 8 forward gears and one reverse gear. The immense precision involved as the fork selects the correct gear and moves through neutral is really staggering. The gears are changed at incredible speeds and torque for 78 laps or a full 2 hours.

The F1 gearbox has a number of unique parts;

This sequence will be the same for each gear the computer selects while the driver speeds up or slows down, shifting through the gears left to right.

The F1 driver only needs to use the clutch to engage the first gear out of the neutral position; after that, the computer takes over and does the gear changes on behalf of the driver.

Interesting Fact – F1 cars have their transmissions fine-tuned for every track as each track demands different driving.

F1 cars make use of a multi-plate clutch. It is usually manufactured from carbon fiber. It can easily handle about 720BHP, 540kW, and it weighs less than 2.2 lb. The unique clutch on the F1 cars is not engaged in the same manner as you would in a manual transmission vehicle. In a manual transmission car, the driver has to engage the clutch every time before a gear is selected up or down.

In an F1 car, the computer electronically controls the clutch mechanism. It is engaged only at the standing start or when they have to pull into the pit for a tire change or fuel top-up. About a decade ago, F1 made the launch control start illegal, and no F1 cars use that feature any longer.

How Often Does The F1 Car Change Gears?

I was not aware that during a 78 lap race, an F1 driver could change gears more than 3600 times. That is an incredible amount of shifts made by the onboard computer, without which an F1 race would not be possible.

In 2009 racing changed for F1 when seamless-shift transmissions were introduced. Allowing for the gearshift to take place in about 0.05 seconds helps the drivers make up time if they need to pit stop.

A factor that needs to be considered is the cost of a gearbox for an F1 car, and each gearbox has to last a minimum of 5 races to be cost-effective. Before the five consecutive races, a gearbox change will result in the team receiving a penalty and a drop of five places in the starting lineup. That is fair considering the average F1 gearbox costs USD 600 000, and an F1 car costs approximately USD 7.7 million.

Do F1 Drivers Use Both Feet?

There are two paddles in an F1 car, the one is for breaking, and the other is the throttle. Around 1999, F1 was using fixed brackets around each paddle. This was used to prevent any foot movement during racing. A foot slipping off a paddle mid-race would spell disaster.

The great Michael Schumacher stunned the world of racing by using an old technique of left foot braking. They could not believe the speed at which he could take corners with, which was all due to the left foot braking technique.

Since the clutch does not have to be engaged by a pedal, such as in a sedan, the F1 driver is able to apply the left foot braking technique with ease. Since electrohydraulic systems made their appearance in F1 during the 1980s, these computer-controlled systems were first used to the gearbox and suspension systems first. Later they would make their way to the clutch as the industry evolved. A lot of design and money went into perfecting the gearboxes and transmissions of F1 today.

F1 racing has evolved the cars to such a level that it can almost do everything autonomously. The driver is there to start the vehicle, engage the first gear, and control the racing car’s speed and direction. The only similarities between a street or production sedan are the fact that they have a gearbox, clutch, and accelerator.

The advanced computer technology in F1 allows for seamless gear changes at incredible speeds. The next time you can watch an F1 race up close and hear the cars screaming around the laps, consider how fast that transmission is working on getting your champion of choice around the track in 78 grueling laps and past the checkered flag with 3800 gear changes under the belt.

The main components that make the F1 car gear changes so unique is the gear selector that consists of the selector shaft housing the selecting forks, selecting pins, and the collar. The way these three components interact is what makes it so fascinating.