This Is Why MotoGP Bikes Sound Different 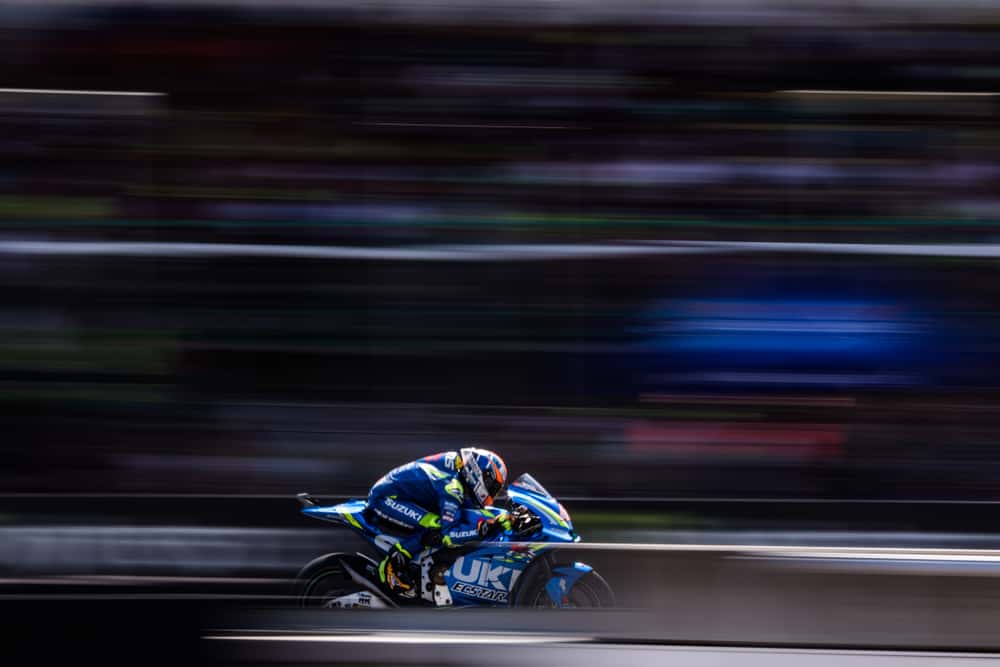 From Late March to October each year, millions of race fans worldwide set time aside on a Sunday afternoon – local time, though many will be up at midnight wherever they are – to savor the cacophony of noise that heralds the start of a MotoGP race. Is it just about the excitement of seeing and hearing 22 riders opening up those 1000cc (max) bikes, or is there more to the sound that sends shivers down your spine?

In essence, MotoGP bikes run free-flow exhausts with no baffling at all, and the two pre-dominant sounds are formed by different engine configurations, creating either ‘Screamer’ or ‘Big Bang’ sounds which is why MotoGP bikes sound different.

Let’s dive in and examine why and how MotoGP bikes sound different.

Do You Prefer A Screamer Or A Big Bang?

The frantic, high-pitched scream versus the throaty, solid grunt is often the topic on point at a MotoGP race, and each represents a very different engine setup.

First up is a 4-cylinder ‘V’ engine, which fires at each 90° rotation of the crankshaft, providing the machine with a constant workload. This configuration gives the bike a significant amount of power when transferred to the wheel. The characteristic sound this creates presents the engine with the ‘Screamer’ moniker.

Changing the ignition timing to a point where technicians then set the explosions to almost the identical moment, letting the engine rest during the rest of the crankshaft’s revolution, increased stability. More importantly to our interests, it created a deep, thumping sound, far different from the screamer, and the ‘Big Bang’ sound had arrived.

Most experts credit the initial use of this system to Honda, whose NSR500 was suddenly a lot more stable once they developed the system way back in 1992. Their driver at that time, Australian legend Mick Doohan, wanted a change to how the bike was responding. After research showed the rest of the paddock that the audio signal was responsible, more and more teams looking for better manageability moved to the Big Bang configuration.

When an internal combustion engine runs at full throttle, the maximum combustion pressure occurs around 11 degrees After Top Dead Center (ATDC). Then, as the piston accelerates downward on its power stroke, there is such a rapid drop in pressure that by half stroke, or about 80 degrees ATDC, the piston has extracted no less than 85 percent of the pressure energy in the gas. Pressure continues to fall as expansion continues, and at the point where the exhaust valves start opening, approximately 100 psi remains in the cylinder. This incredible pressure build-up produces the sound that we love to hear.

How loud is a MotoGP bike?

Sound is measured in decibels and abbreviated to dB. A-weighted decibels (abbreviated dBA) express the relative loudness of sounds in the air as perceived by our ears.

A MotoGP bike has a maximum noise level of 115 dBA allowed during racing. However, the actual dB level of an unmuffled race engine is much higher. Thus a MotoGP bike is a lot noisier than a bike from the lower two racing divisions (Moto 2 and Moto 3) and far noisier than a standard street bike.  Street bikes have a maximum rating for noise -as regulated by the Environmental Protection Agency (EPA)- of just 80dBA.

Can the Noise of a MotoGP Bike Affect Your Hearing?

Sounds at a volume under 70 dBA are usually considered safe. A sound above 85 dBA is more likely to damage your hearing over time. Research has shown that people exposed (over long periods) to noise levels higher than 85 dBA are at a far higher risk for hearing loss, so if you plan to watch a lot of MotoGP live, consider seriously taking earplugs along. The alternative is a high-risk foray into excessive sound attacks, which might well become debilitating later in life. Just ask the hard rockers who thought it was cool to stand right beside the speaker towers at a Black Sabbath concert.

That said, there is nothing quite like standing on the side of a racetrack – any racetrack!- where you might position yourself close to a corner in readiness of a wall of sound approaching at perhaps 280kmph/174mph.

Experiencing the Sound of a MotoGP Bike

It may be your spine or perhaps your rib cage that converts the sound of the approaching pack into a feeling, but goose-bumps follow, and your heart rate will most definitely spike as they charge down at you. Not only will you hear the Screamers and the Big Bangs, but you will also feel them in your torso and in – not just with – your ears.

The adrenalin rush is massive, and your heart will be thumping long after they have passed. Note this caveat; you have around 90 secs – dependent on the circuit – before they come round again, so resist the temptation to tough it out and do the sensible thing: Pop those earplugs into your lugholes!

What Causes Sound to Damage Ears?

Loss of Hearing Can Be Permanent

Hearing loss is a reduction in the body’s ability to hear or understand speech and sounds around it. This loss can occur when any part of the ear or possibly the nerves that carry information on sounds from your ear to your brain begin working erratically.

Often, loss of hearing can be temporary. However, it can become permanent when vital parts of your ear become injured past the point of correction, and damage to any part of the ear can lead to hearing loss. Loud noise, in particular, is very harmful to the inner ear (cochlea).

A one-time exposure to deafening sounds (or simply listening to loud sounds (like metal music or MotoGP bikes) for a long time, can cause severe hearing loss.

As mentioned, loud noise can undoubtedly damage cells as well as membranes in your ear. If you listen to loud noise for a long time, you stand the danger of overworking hair cells in your ear and killing the cells off entirely.

This hearing loss continues as long as the exposure takes place. Harmful effects might worsen even after the noise exposure has been shut out.

There is a genuine reason that the mechanics at Moto Events wear protection for the ears, and it goes far beyond the recent regulation changes imposed by FIM.

The CDC states that: After leaving an earsplitting event, such as a concert or football game or Moto events (this added by me), you may notice that you don’t hear as well as before. You might even miss whispers. Normal sounds may appear muffled, and you might even experience some ringing (in your ears.)

Generally, normal hearing will return within a few hours to a few days. This delay is due to the hair cells, similar to blades of grass, bending more as the sound gets louder. Fortunately, they will become straight again after an indefinite recovery period.

Sound in Moto2 and Moto3 vs. MotoGP

Sound – or noise – in Moto2 and Moto3 is very different from that created by MotoGP bikes. In the first place,  the engines in Motos2&3 are a lot smaller – 765cc and 250cc respectively, compared to MotoGP’s maximum of 1000cc.

Already revered as one of the most exciting sounds in motorcycle racing, Triumph’s 765cc Triple engine results from more than two years in an engineering development phase and has race-tuned modifications that deliver over 128 horsepower (hp) and provide performance levels never before seen in Moto2.

With this information and a little practice, you will soon be able to differentiate between ‘Screamers’ and ‘Big Bang’ bikes on the track. Despite Moto2 also having a 4-stroke engine, it has three cylinders, producing a sound of its own.

The setup on the MotoGP bike will determine its final sound. Music to some, or mere noise to the unenlightened, this sound is instantly recognizable.  Whether you prefer a ‘Screamer’ to a ‘Big Bang’ sound or vice versa, you will hear why a MotoGP bike sounds so different from all other bike classes.