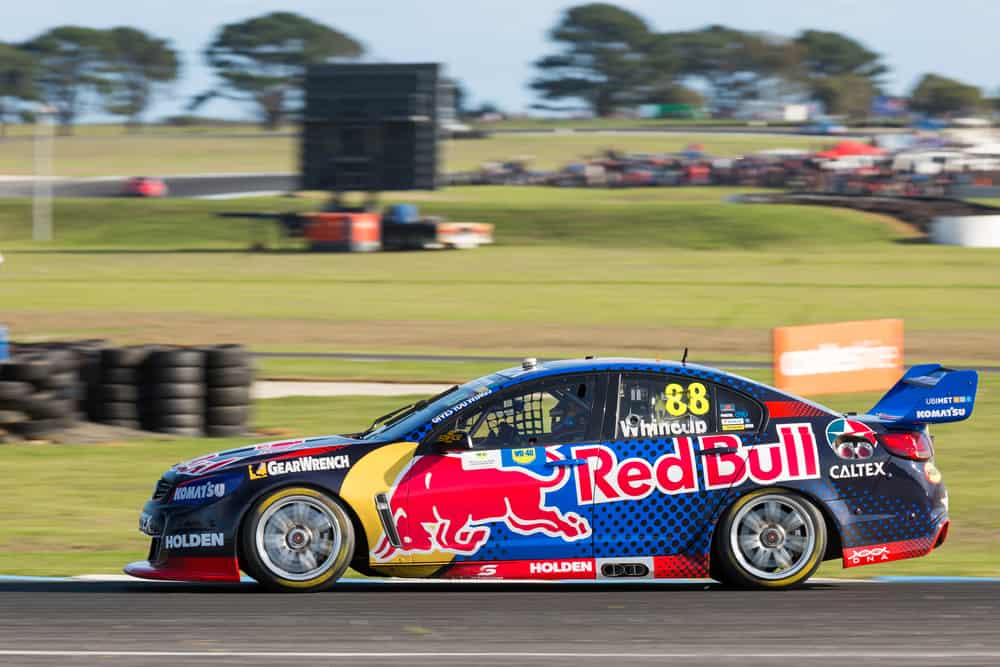 Sadly, the V8 Supercars series is confined to Australia. The series offers a glance back in time to the old style of racing of years gone by when emissions weren’t recognized as such a big problem, and large gas-guzzling engines were everywhere and universally loved by petrol heads.

If you have never watched a V8 Supercars race, we recommend that you log into YouTube and search for an example. You will be captivated on end up sitting on the edge of your seat as you watch drivers jostle for position, where the only real differential is the driver’s skill.

Which Is Better, V8 Supercars Or A Formula 1 Car

This article compares the 2022 Formula One car and the V8 cars running in Australia’s touring V8 Supercars racing series.

The two racing disciplines are completely different, not only because the cars are a paradigm shift away from each other but also the type of tracks on which the cars are run, as well as the difference in audience and viewership figures.

The manufacturers who participate in the V8 Supercars competition are.

Which Has The More Powerful Engine?

For comparison purposes, the 2022 Mercedes W13 car has been chosen because, based on its 2022 performance, it represents the average Formula One car, not the fastest or slowest.

The power units installed in each of these vehicles are as follows.

The engine specifications of the V8 Supercars are as follows. The cars must have an engine in the front, and the rules permit only rear-wheel-drive.

The Mercedes W13 specifications are.

The car is powered by three “engines,” as follows.

The estimated horsepower produced by the three engines is

The total from all three units is estimated at 950 hp.

The 2022 Formula One regulations require that Formula One cars cannot weigh less than 1,760lbs (798kgs). Therefore, the cars have a power-to-weight ratio of 0.54 to one lb.

What Is The Performance Difference?

The performance of each car is detailed below.

The V8 Supercars’ performance specifications are detailed in the table below.

The W13 performance specifications are detailed in the table below.

How Does The Handling Compare?

The table below provides this comparison.

How Does The Safety Of Each Car Type Compare?

The safety systems on each car are shown below.

How Comfortable Is Each Car?

To make the comparison of the two cars easier, the following summarizes each of the relevant metrics.

Which Is The Easier Car To Work On?

If you are looking for a true comparison, another consideration is how easy or difficult the different car types are to work on.

The engine is a relatively simple conventional internal combustion unit.

V8 Supercars use a different system to other racing series in that there are several compulsory pitstops, the number which is required and the extent of work that is mandated, the amount of fuel that must be put in the tank, and the number of times the tires are changed differ from race to race.

If the V8 Supercars driver does not complete the required pit stops correctly, they are unable to stop before the race is suspended (for whatever reason). A penalty is added on top of their overall race time.

Eight pit crews can work on the car simultaneously, which are made up of the following duties.

In a typical pit stop, the V8 Supercar crew will

And this will be completed within a minimum time of 50 seconds. The minimum time is a regulation designed to assist with safety and ensure the teams don’t rush excessively.

Formula One cars are very complex.

During a typical racing week, they are

Similarly, the race teams can remove and replace a front nose unit in under ten seconds.

If there is a major accident before the race and the car is substantially damaged, some teams have been known to completely rebuild it, replace the engine and bring the aerodynamics back to spec before the next day.

How Much Does Each Car Cost?

All the cars featured in this comparison cost an absurdly large amount of money; however, the Formula One Car has no rivals.

It means that the cost for each unit of horsepower is

To say that the Formula One car is at a different economic level is an understatement!

A Word About The Different Series

Apart from the obvious differences in e equipment raced, the two series have many significant differences affecting the spectator enjoyment.

One of the main structural differences

There are 26 cars in a V8 supercar race, and because regulations standardize chassis and engine requirements, at least 2/3rds of the field have a genuine possibility of achieving a podium finish.

Formula One is trying to level the playing field by imposing strict controls over the car specifications, the ability to follow closely, and the cost cap per team.

It will take several seasons before the institutionalized advantages that the top three teams have (Red Bull, Ferrari, and Mercedes) begin to dilute, and all the teams end up on a level footing.

The Two Disciplines Differ In Strategy

There are different types of excitement between the two series.

The action starts when the flag drops and continues through the race, with lead positions regularly changing.

Depending on which circuit is being raced, Formula One can sometimes be a procession of cars driving around a track with few overtaking opportunities.

Monaco is a classic example of this, and unless you are a serious F1 fan, it can be likened to watching paint dry.

The Sounds Are Different

There is nothing quite like the sound of a V8 engine at high revs and under strain. For the avid motorhead, it is the sound of a choreographed symphony.

Sadly, the days of V12 and V8 engines are a thing of the past; with that, some of the atmosphere has left the building.

Formula One is the most-watched motorsport worldwide and grows its fan base yearly. Other regional motorsport events have the same, if not more nail-biting excitement, and the V8 Supercar series deserves mention.