What Does A Safety Car Do In F1? 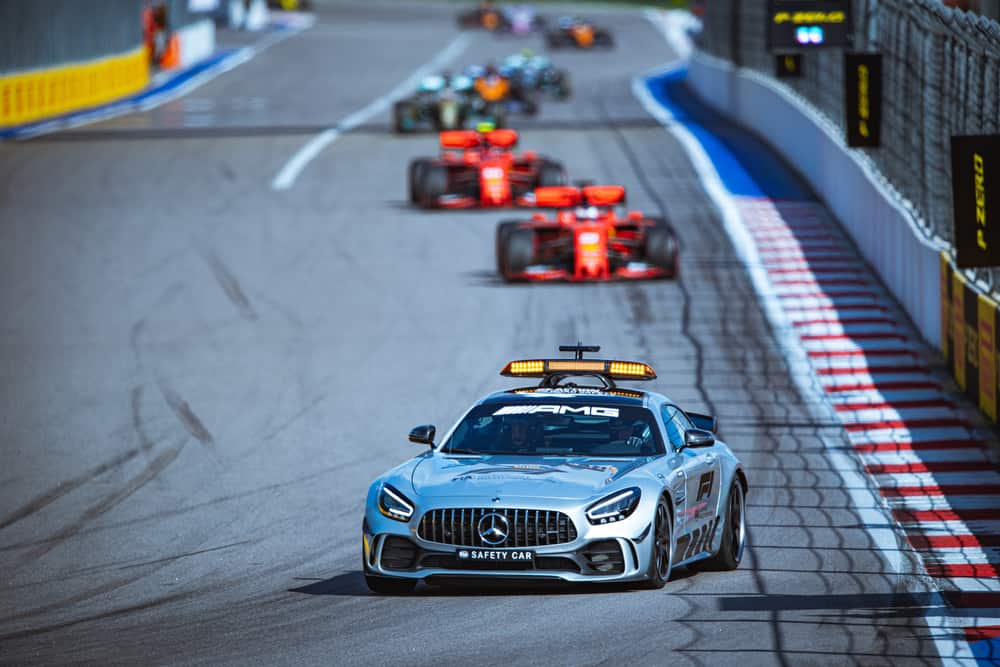 Formula 1 motorsport is one of the most popular types of motorsport in the world, and the safety of the drivers is a real big deal. In cases where safety may be compromised, a white vehicle with lights suddenly makes an appearance on the track; this is the safety car. It makes one wonder: what does a safety car do in F1?

A safety car was first used in 1973; in this race, the safety car did nothing but mess up the race. After that, safety cars started appearing again in 1992. The safety car is used to slow down the pace of the racing cars in cases of severe weather or accidents to prevent harm to drivers or vehicles.

Safety cars started to become a frequent sight in 1993, and currently, the choice of the safety car is Mercedes Benz AMG. These vehicles are equipped with orange and green lights with specific meanings. This post will explore more on what a safety car does in F1. Other topics like the meaning of the orange and green lights will also be looked into.

What Does A Safety Car Do?

The purpose of a safety car, or a pace car as it is often referred to, is to ensure that racecars slow down by getting drivers to fall in tow behind the race leader until the dangers are cleared. The drivers follow the safety car at a reduced speed while guiding them away from the dangers. F1 racers are not allowed to pass any vehicle while the safety car is on the track.

Virtual safety cars are another measure that the race car drivers have followed in F1 since 2015. Drivers pace themselves in cases where a safety car will cause disruptions to the race. There will be more on this in a section later in this post. But first, a section about what the safety cars get up to with their colored lights on and off the racetrack.

The driver of the official safety car will sit on standby until they are called on by the race controllers with the aid of communication devices. At this moment, the safety car will make its way out onto the racetrack, illuminating boards on the side and overhead over the track will notify the drivers when this happens. Display units in the race cars are also used for this.

Safety marshalls wave yellow flags, and all of these methods of warning and communication tell drivers to start slowing down and to be on the lookout for the safety car. In some cases, the pit crew will also communicate with the drivers using radio technology. The safety car will have its orange lights on as the race cars approach for visibility.

What The Safety Car Does With Orange Lights On

The safety car has orange blinking lights attached to both sides of the green light on the roof. The reason the orange lights are blinking is to show the race car drivers that it is on the race track and that they should follow it at the pace that it is going around the racing circuit. Safety cars only go onto the track if called on by race controllers.

It would not be fair to the race leader to lose the position, and that is why the safety car will signal other cars to pass it in safe areas around the circuit; the way the safety car does this signaling is in the next section.

What The Safety  Car Does With Green Lights On

The orange lights blink continuously, but the green light is only illuminated to signal vehicles when it is safe to pass.

When the safety car gets word from the race controllers that the danger is cleared or the race can resume, the safety car will have a final lap, but this lap will be done without the orange or the green light being illuminated. It shows the F1 drivers that it is the last lap behind the safety car.

What Does A Virtual Safety Car Do?

Immediately the thought of a PlayStation game with a ghost car comes to mind, but unfortunately, it does not work the same. For minor safety issues, this motorsport uses a virtual safety car system. The flags are still used, the communication methods are still used, but instead of the safety car coming out on the track, there is nothing.

And like magic, all the cars slow down on their own and fall into formation behind the leader. This safety car system works utilizing communication with the drivers of the F1 cars by using displays inside the cars. The signs on the side of the track and overhead have the letters VSC displayed, and when it turns green, it means race time.

Not much has changed in terms of why safety cars are used; even historically, safety cars were used to pace the cars. The only things that have changed over the years are the methods of communication and the rules and regulations.

The first time an F1 safety car was used was in 1973; here is the information:

The return of safety cars happened in F1 this year after a few test runs in 1992; here is the information about the safety car:

In 2007 the safety car started, led, and paced the race for a total of 19 laps. The safety car only left the track at lap number 20. It was raining on this occasion, but it was also misty. It made visibility very bad, resulting in the safety car being on the track for the most extended period in the history of this sport.

The safety car had to come out in the last part of the final race of 2021, after a crash on lap 53 of 58. Hamiltons team decided not to have a late pit stop because they did not want to give up the lead, while the team from Red Bull called in Max Verstappen for a fresh set of tires. Verstappen won the championship because of this decision.

The chance that Hamilton would have retained his title if the safety car did not come out was perfect. Mercedes appealed multiple times because of this outcome.

There are many interesting facts about safety cars and what they do, but it is way too much to share in a post like this, so if you enjoyed this article, then go and do some additional research on this topic. Have fun watching and following this fantastic world of F1.

Louis Pretoriushttps://onestopracing.com
Previous article
Where Can You Buy F1 Racing Gear? The Ultimate List
Next article
Best Place To View F1 At Silverstone