What Does F1 Do With Used Tires? 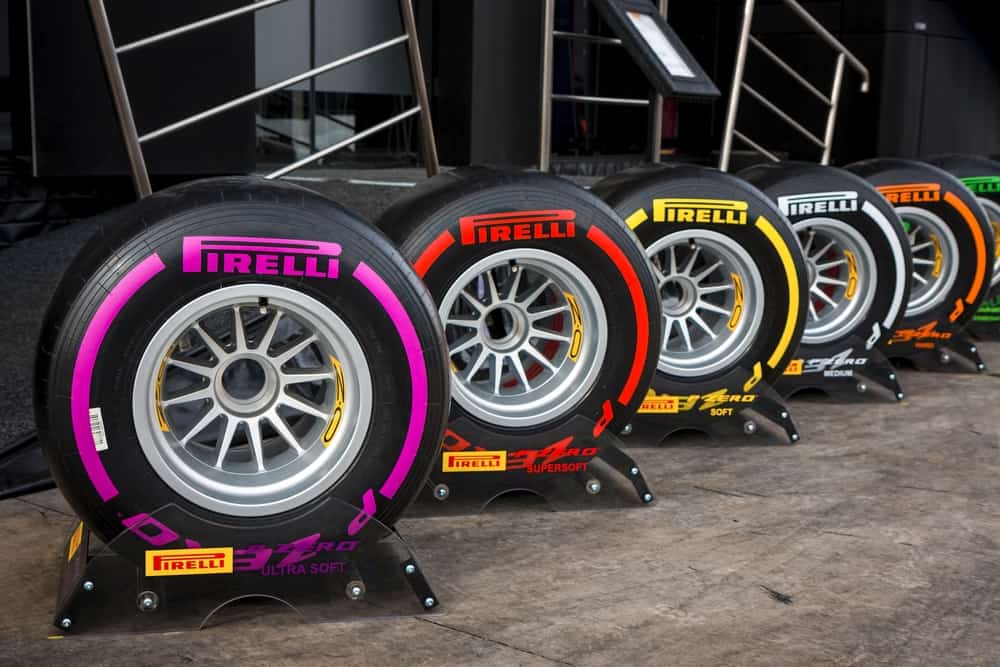 Tires are one of the most important elements of F1 cars and road cars. After all, it is the only part of the car that touches the road, and therefore the one that wears the most during races, but have you ever wondered what F1 does with used tires?

Used F1 tires are transported to the Pirelli logistics center in Didcot, England. They are crushed, sent to cement companies, and burned to function as fuel in boilers. The material produced in this process can also be used for road surfaces and other industrial applications.

Even though F1 is committed to the environment and sustainability, a large number of tires are still used every weekend. However, according to Pirelli, the F1 tire supplier since 2011, this process does not pollute. Let’s explore the whole truth about used tires in F1.

What Is Considered A Used Tire In F1?

This question seems silly since it is common sense that a used tire has been used during the weekend, but it is not entirely the case.

A Pirelli tire is considered used once it has been fitted to the rims. This is because they are so tight on the rims that you have to apply a lot of force on them when they are disassembled so they can be damaged. All tires are fitted on Thursday of every weekend by Pirelli engineers.

Tires taken to a GP are not carried over to other races, even though they have not been used on the track, as according to Pirelli’s F1 boss Mario Isola, F1’s logistics prevent this.

Pirelli tires are manufactured in Turkey and Romania. From there, they are moved to England and from there to the country of the corresponding GP in special containers so that they do not degrade.

To return them, it is cheaper to compress them and put them in normal containers to wear out. They can only be transported so that they do not wear out in races in Europe, since transport by road is more profitable and economical.

And that is why around 1,800 tires had to be demolished when F1 was scheduled to race in Australia in 2020, as the tires were already fitted to the rims on Thursday, and the race was canceled the next day due to the pandemic Covid-19.

What Does F1 Do With Used Tires?

After each GP, Pirelli collects all used (on track) tires and tears them open to analyze the compounds and collect valuable data. Then, they are taken to the Pirelli logistics center in Didcot, England, and are crushed and sent to cement companies, where they are burned to fuel in boilers.

Pirelli does not offer many details about this process. Still, they ensure that their tires do not generate pollution since the materials with which they are manufactured do not emit toxic gases into the atmosphere when incinerated.

Most tires are incinerated, but some companies buy them as protective barriers on circuits or once incinerated, they can also be used for road surfaces and other industrial applications.

How Many Kilometers Do F1 Tires Last?

When watching F1 races, you have probably noticed that drivers change tires in the middle of the race. This is because F1 tires are built for performance rather than longevity, while road car tires are made to be safe and durable.

Since F1 cars go at such high speeds, and tires are made for extreme performance, the rubber wears off in no time. Throughout the weekend, the engineers calculate and analyze the performance of the tires so that everything goes smoothly in the race. Poor racing or pit stop strategy can ruin a driver’s race.

How many Tires Are Used In Each F1 Race?

On average, Pirelli provides 1,800 tires per GP, which is 45 sets of tires for each team. Considering that the season has 21 races, that would be around 37,800 tires a year, which is quite high as there are only 20 cars on the grid.

For example, according to data from 2016, 42,792 tires were distributed in that season, and only 15,652 were used. That means that only 36% of the distributed and transported tires were used on the track, and the rest were incinerated. However, we must be careful with this data, since as we said previously, Pirelli does not offer many details about its administration.

What Are F1 Tires Made Of?

Being built for extreme performance, F1 tires differ in composition, structure, and materials of road cars. According to Brian Silvestro’s analysis for the Road And Track website, F1 tires are made out of three main sections:

In the video below, Scott Mansell from the YouTube channel Driver61 splits an F1 tire in two and reveals what’s inside:

Despite what it may seem at first glance, there is a complex process behind the tires in F1. They are one of the most essential items in racing and, as we have seen, most of them are incinerated after use.

F1 is committed to sustainability and efficiency, and there is still a long way to go, but progress is made every year in many areas.