What Does Flag To Flag Mean In MotoGP Racing? 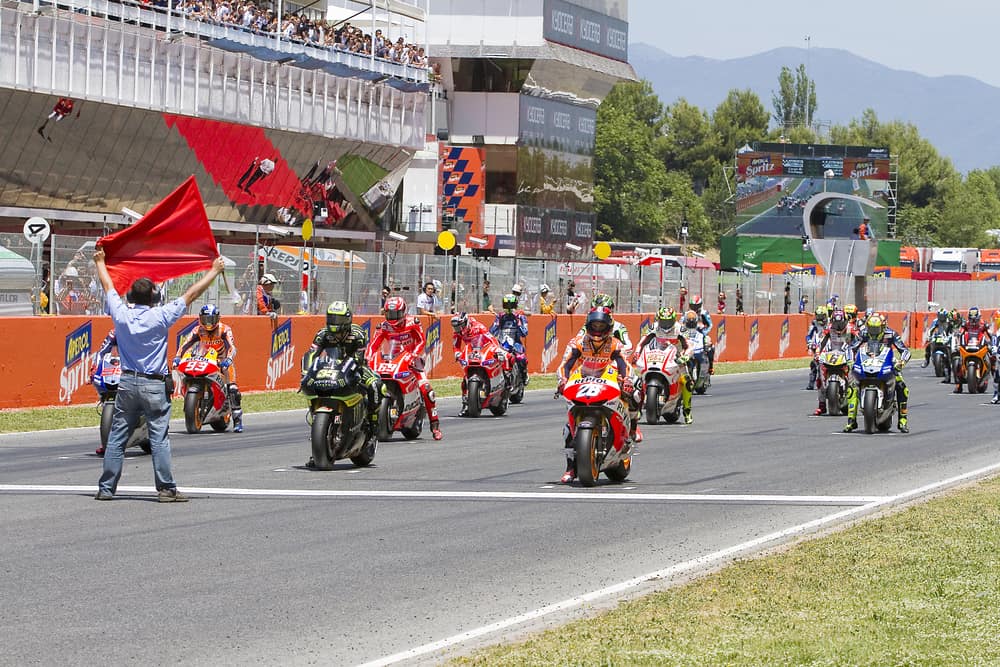 Since MotoGP’s inaugural season in 1949, there have been many changes to the regulations. In 2005, MotoGP implemented a flag-to-flag rule, which is unique to MotoGP racing and prioritizes the safety of riders. Despite being in effect for nearly two decades, many MotoGP fans are unfamiliar with this flag-to-flag rule.

When it rains before or during a MotoGP race, white flags are placed at the marshal posts to indicate the flag-to-flag rule is in effect. This means the dry race has now been declared a wet race. During a flag-to-flag race, riders can return to the pit lane and switch to their spare bike.

There’s a reason many people are unfamiliar with what “flag-to-flag” means in MotoGP racing: it’s a rule entirely unique to MotoGP. If you want to discover why this rule only applies to MotoGP racing and what a flag-to-flag race entails, this is the article for you!

What Are Flag To Flag Races In MotoGP?

Most MotoGP races are dry races, which means that the race takes place in dry, clear weather conditions. Before the flag-to-flag rule was implemented, dry races were typically ended if it started raining. In these instances, officials could decide to red-flag the race, indicating that the race has been interrupted and riders should slow down are return to the pit boxes.

Implementing the flag-to-flag rule solved this problem, effectively preventing dry races from ending prematurely when weather conditions change. When the flag-to-flag rule is implemented during a race, MotoGP officials will indicate this with white flags at the marshal posts – but what does this rule entail?

Unlike car races where pit crew members can quickly change tires, this process takes much longer on MotoGP bikes. Due to this, it is more effective for riders to change their whole bike as opposed to just the tires. When compared to racing cars, MotoGP bikes are cheaper and smaller, making it possible for riders to have a spare bike.

Since MotoGP riders have access to two bikes, the flag-to-flag rule was easily implemented. As soon as a dry race turns wet, riders can switch bikes. Before a MotoGP race starts, the race officials will set bike positions for riders, which accounts for their spare bikes. If riders switch bikes, their team is responsible for a safe release into pit lane traffic.

Many MotoGP fans will be surprised to learn that this rule was introduced thanks to the riders! As we explained, races used to be stopped if it started raining. However, drivers insisted on an alternative to this, and thus the flag-to-flag rule was established. The reasoning behind this is that the riders know what the track is like and should have a say in when a race should stop.

What Happens When It Stops Raining During Flag To Flag Races?

Once a MotoGP race has been declared a flag-to-flag race, it will remain that way until the end of the race. As soon as this is declared, drivers are free to change their bikes at any point during the race. Read on if you’re wondering whether all MotoGP riders switch bikes during flag-to-flag races!

Do All MotoGP Riders Switch Bikes During Flag To Flag Races?

Earlier, we explained that a MotoGP race could be declared a flag-to-flag race before or during a race. However, many people have wondered whether all MotoGP riders switch bikes during races in changing weather conditions. Ultimately, this is up to the driver!

If you’ve ever watched a flag-to-flag race, you might notice that some riders don’t immediately switch bikes. If the rain isn’t too heavy, some riders may decide to continue for a few laps before switching. Others may avoid switching altogether, while others switch multiple times. Since riders have unlimited bike swaps during flag-to-flag races, riders can better strategize during races.

How Often Do Flag To Flag MotoGP Races Take Place?

Last year, MotoGP made headlines when the first flag-to-flag race in four years took place. If you happened to be watching, you would have seen chaos unfolding as riders switched bikes in the pitlane. While flag-to-flag races don’t happen that often, it’s a thrilling viewing experience when it does happen!

White flags are displayed at the marshal posts when it begins to rain during or before a MotoGP race. The white flags indicate that the flag-to-flag rule is now in effect. Essentially, this means the race is taking place during changing weather conditions. During these races, riders can swap between their two bikes in the pit lane.

Louis Pretoriushttps://onestopracing.com
Previous article
How Much Power Do MotoGP Bikes Have?
Next article
How Many Formula 1 Teams Are There?