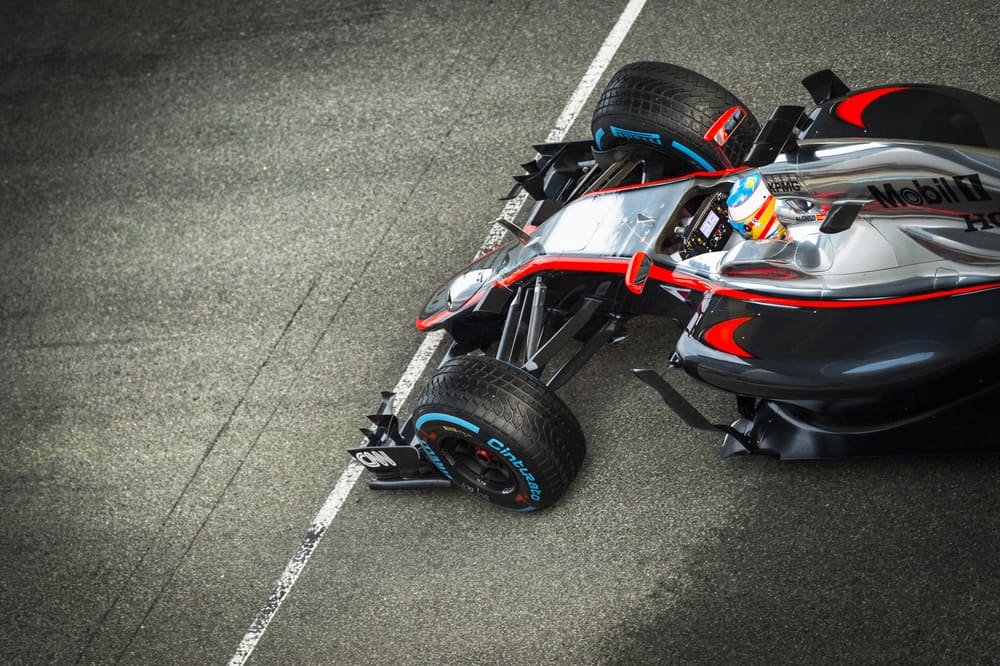 Like any leading sport, Formula One is its alphabet of terms that can seem daunting to the newcomer. Once you have learned what they mean and hear them in use, they become part of everyday conversation.

P is an important letter in Formula One and has several meanings depending on the context. P1 in a leader board indicates the driver’s position in the race. At the same time, while qualifying, it refers to the position during the session stages and, finally, the driver’s starting position on the grid.

The letter P is an important letter in Formula One, partly because The lower the number which appears after the letter P, the better the Formula one driver is doing in the race. It also means the position of the engine mode selector in the formula 1 car.

There are several contexts in which the letter P can be used in Formula 1.

P On the Leader Board

An often-asked question is why the teams use the P as a prefix instead of simply saying 1st, 2nd, etc.

The P prefix dates from when pit boards were the only way for Formula One teams to communicate with Formula 1 drivers on track. Even in the modern era of digital displays, P1 is an unambiguous way to state position in the race.

Even though the team can constantly communicate with the driver, the pit boards are still used. The boards are light metal frames with five slots for interchangeable letters and numbers.

These boards are held in sight of the Formula One driver as he races past. They have to be simple and concise, as, at the speeds which the Formula One cars go past, the driver has less than half a second to absorb all of the information.

A typical board would read as follows:

If the driver uses position four to communicate the Interval to the car in front, it enables him to know if he is in DRS range or not.

DRS opens up the flaps on the rear wing, which reduces the drag. Activating this device increases the speed by 10–12 km/h (6.2–7.5 mph) by the end of the activation zone.

The driver is only allowed to activate it if the car is less than 1 second behind the vehicle in front.

The driver would therefore be presented with the following example:

The various letter prefixes make it easier for him to pick out the different bits of information.

In qualifying, P means the driver’s position through the sessions, which ultimately determines the grid positions for the start of the actual Grand Prix race.

In a normal Grand Prix weekend, which does not involve a sprint qualifying format, the qualifying sessions involve three outings, namely Q1, Q2, and Q3.

The final positions are logged with P as the suffix. The five slowest drivers who only achieved positions P16, P17, P18, P19, and P20 are eliminated, and those are the positions from which they will start the main race.

The second qualifying session is called Q2, and during this time, fifteen cars run to find out who can achieve the fastest time.

Q3 is where the final action takes place, and the last ten drivers compete for the fastest lap time and, therefore, their position on the final grid.

On race day, the fastest driver starts at pole position at the front of the pack, which theoretically allows him to pull away from everyone else and control the race from the front. While this is often the case, some tracks favor the P2 position.

What Else Does The Letter P Mean For F1 Racing

Some teams also use the letter P to communicate the car’s engine modes.

These include P0, P1, and P2 and are present on post-2013 Formula One cars. While individual teams have their terminology, the meaning of each mode refers to fuel position.

P1 is usually “limp mode” and runs the engine with a rich fuel mixture and limits the engine revs to keep anything from falling.

All electrical systems on the car are completely powered off, and the engine is not allowed to start. There is nothing more disheartening for a driver to hear when told to select mode P0. The driver’s race is finished, and the car must be disabled.

In this mode, the car:

It doesn’t include the battery itself because various safety-related sensors and electronics are within the battery casing.

The electrical charge is disabled to the following components:

In ignition Mode P1, the engine cannot start; the gears cannot be changed except for selecting Neutral using the external release button.

In ignition mode P2, all electrical systems on the car have power, including all engine and other power-train components. In this mode, the vehicle is functional.

The modes and others unique to each team are controlled from switches positioned on the steering wheel.

The location of these switches and their actions are standardized.

It helps the marshals and other staff extract a stricken car off the track or if a driver retires from a session in parc fermé.

The letter P has multiple meanings in Formula One, the most commonly used of which relate to the driver’s position in the different sessions. The lower the number which follows the letter P, the better the driver is doing.

Formula 1 has its alphabet, and the letter P is significant whether this is the car’s place in the driving session or the engine mode selected, “P” always communicates a position.

Louis Pretoriushttps://onestopracing.com
Previous articleWhat Does Out Lap Mean In F1?
Next articleCan You Pit During Safety Car?

If you watch an F1 race, there will inevitably...
Read more

If you want to become a Formula One doctor,...
Read more

Given the recent discussions of LGBTQ+ athletes, supporters, and...
Read more