What Engine Does Ferrari Use In F1? 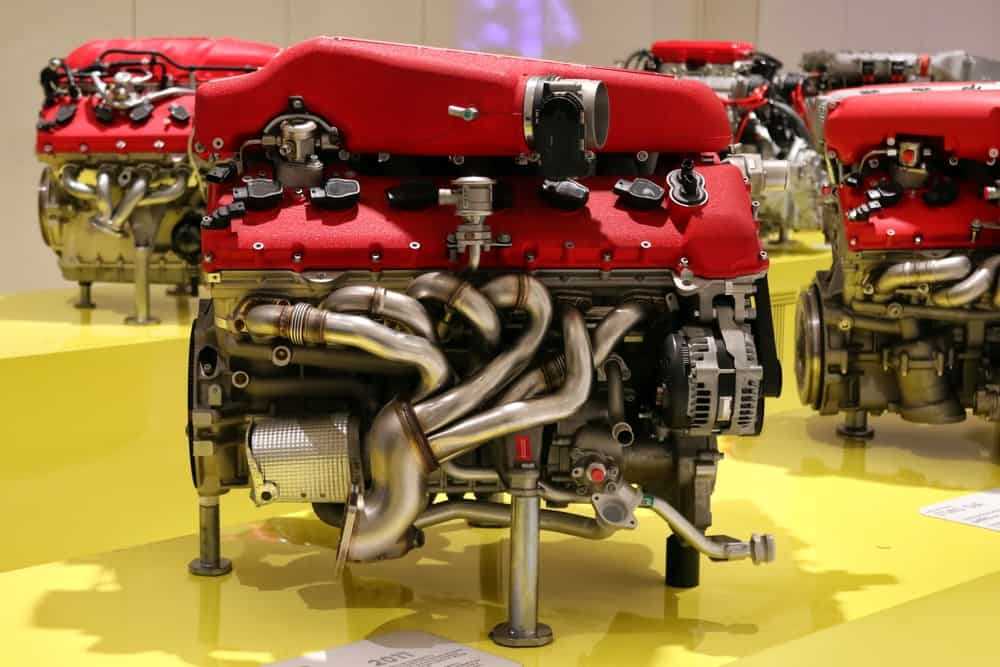 One of the abiding features of Formula 1 is how teams who have dominated the sport for years can suddenly lose their position. Nothing demonstrates this more than Red Bull and Mercedes, who both enjoyed extended runs at the top, and now in the 2022 year, it looks like Ferrari has the upper hand.

Ferrari uses their own engine, which they used by the Alfa Romeo and Haas F1 teams. All three entities have seen a significant turn in their results, and while many factors may contribute to this, including the chassis and aerodynamics, the only common feature between the teams is the Ferrari engine.

Ferrari has come into the 2022-year swinging, and it isn’t just Ferrari; customer teams (Alfa Romeo and Haas) languished at the back of the grid last year – have done much better teams and have placed the teams around them on notice.

In 2019/2020, the Ferrari engine was generally considered the best powerplant, but it apparently exploited several “grey” areas in the regulation and ultimately fell foul of rules.

After an investigation, the FIA responded by issuing technical directives concerning the fuel flow rates and sensors, which resulted in the engine having a severe deficit compared to its competitors.

Ferrari achieved an “understanding” with the FIA. It is rumored, amongst other things, to have required Ferrari to fund and participate in the research of the development of the new fuels.

If this is true, it may partly explain why Ferrari has been least affected by the new fuel compared to the other teams.

While other teams have lost horsepower by introducing the E10 fuel, Ferrari has gained 25 horsepower over the 2021 unit.

Mercedes and Red Bull have struggled with a power loss caused by the new fuel, and Ferrari has been romping ahead of the pack.

The E10 fuel ruins at a warmer temperature than the 2021 fuel, which imposes a potential reliability problem; however, the Ferrari F1-75 seems to be immune to any of these issues and, in pre-season testing, ran more laps than the other teams and had no reliability issues.

The parts of the new Ferrari engine which seem to have the most significant impact on the performance are;

Gains In The Electrical Recovery System

Ferrari’s new ERS system was introduced in the 2021 season and is a hybrid element and has an upgraded 800-volt energy store.

Ferrari used the component for the first time in the 2021 Russian GP. It showed its future potential when the Ferrari noticeably pulled away from McLaren and earned P3 in the 2021 constructors title. Before this, the two teams had run neck and neck, and the McLaren seemed destined to win.

Not Splitting The Turbo

Ferrari is the only team to have not split the turbo, making it more suitable for the new fuel.

Every other F1 engine has opted for the Mercedes design using the split turbo layout, which they introduced in 2014, Honda introduced it in 2019, and Renault in 2022.

This format could also have some cooling benefits, and the vast, sculpted side pods on the Ferrari could also make this format work better as the Ferrari engine didn’t seem to break a sweat.

The paddock scuttlebutt is that with the cooperation with the FIA fuel research, they may have had an inside track as to which layout is the most suitable for the new E10 (10% Ethanol) fuel mandated for 2022.

Ferrari made decent progress with its engine last year and had a late-season boost thanks to an updated hybrid system intended for 2022, giving it confidence heading into the new campaign.

When Ferrari launched the 2022 car, Mattia Binotto, the Ferrari team principal, confirmed, apart from installing a few additional sensors required by the new regulations, this hybrid is almost precisely the same as the upgraded version in the 2021 car,

Ferrari has worked on the combustion system on this new engine, which is internally dubbed “Superfast.” Ferrari has created an innovative intercooler, one of the most significant internal combustion engine technology advances.

The intercooler creates turbulent air to mix with the fuel.

The Introduction Of The Superfast Ignition

The new intercooler makes it possible to use Ferrari’s new superfast ignition system.

It enables Ferrari to take full advantage of the 500-bar fuel pressure limit enforced by the FIA. In terms of performance, it is intended to improve acceleration, which Ferrari competitors have all commented about.

Ferrari ran more downforce, which resulted in it being 7 km/h slower than Red Bull on the straights through the speed trap in qualifying. The speed traces around the lap show that the Ferrari has a superior acceleration rate compared to any other team.

The advantage is being mainly credited to the new Superfast Ignition system.

Another reason for the impressive acceleration performance is the gear ratios that Ferrari has chosen.

Although Ferrari has no official comment, one of the most effective ways to achieve higher acceleration rates is to start with lower gearing with ratios that are closer together.

Ferrari may have chosen to run a shorter set of ratios in the lower gears or combine the two.

Either Ferrari has massive amounts of additional power than Red Bull, or it is a combination of lower gearing (Ferrari’s 6th and 8th gear are equivalent to Red Bull’s 5th and 75th).

It would also partly account for the differences in top speed.

It is pure speculation,  and the F1-75 engine may be so strong that it was possible to out-accelerate the competition up through the gears more quickly, even with comparable gearing.

The raw specification of the 2022 Ferrari F1 engine is as follows.

In 2022 Ferrari will be the engine supplier for the following teams.

The History Of The Ferrari Engine

Ferrari is the only F1 team to have competed in the series since its second year of existence in 1951. Since 1951 Ferrari has manufactured 69 different Formula vehicles.

Since 1951, F1 cars powered by Ferrari engines have achieved the following.

Unfortunately, in 2019 Ferrari was involved in a scandal that other teams did, although never called cheating by the FIA. The FIA censure took Ferrari out of the constructor and driver stakes. However, apart from this painful period in the 2020 and 2021 seasons, the Ferrari engine’s legacy in Formula 1 remains unrivaled.

Even Ferrari’s competitors have judged the 2022 Ferrari engine as the best on the grid, and with the development freeze for the next 3 ½ years, it seems improbable that the other teams will close the gap.