What Engine Does KTM Use In MotoGP? 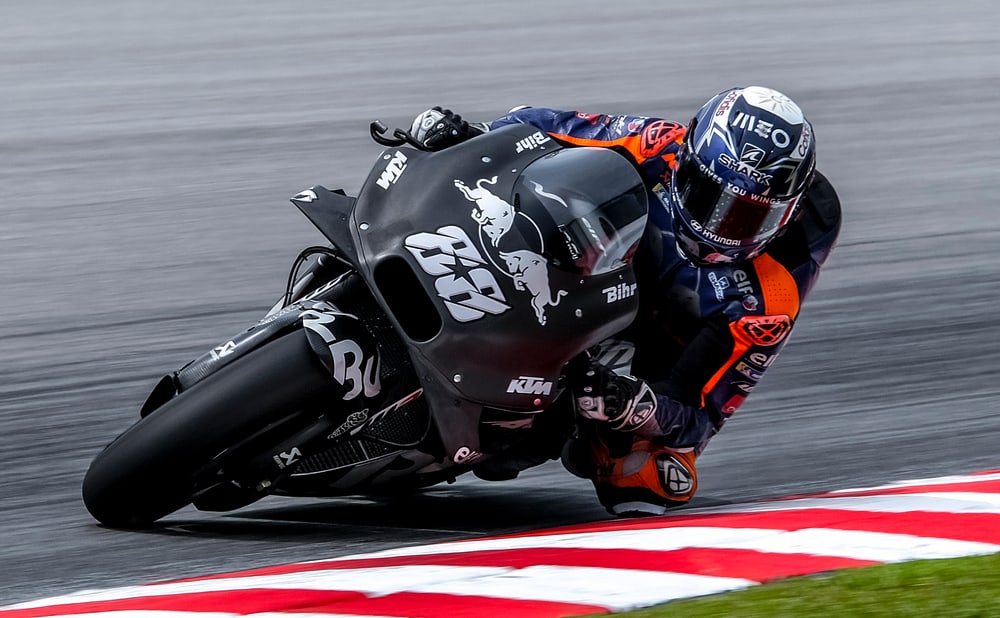 It’s no secret that KTM is one of the most impressive sport bike manufacturers creating trends and setting standards wherever they compete. With over two hundred titles to their name and an overall shared vision of being ‘Ready to Race,’ they have produced some of the world’s most impressive racing machines. So, what machine do they use in the MotoGP?

In the premium class, KTM races with the RC16. Under the supervision and development of test rider Dani Pedrosa, the motorcycle has a V4 yielding 265 hp and a top speed of more than 340 kph. As of 2021, new adjustments and developments were focused on aerodynamics and chassis.

Since the implementation of the concession system in 2016 and the unprecedented circumstances of the Covid pandemic, which caused a lot of technicalities to be put on hold, fans were expecting a whole new machine from KTM as they were able to change it before the new season kicked off. So, what are the current specifications, and did they make any changes?

What Are The Engine Specifications Of The KTM?

The new 2020 KTM RC16 was developed with the assistance of test rider Dani Pedrosa and is a V4 powerhouse with 265hp. The current machine is a slightly improved version of its predecessor, which only had 250 hp.

Although the bike is more advanced, it still has similar specifications to the previous version. It was already a popular and effective machine, and rules prohibited the team from increasing certain standards.

As per MotoGP regulations, the KTM is fitted with four cylinders and capped at 1000 cc. The specific placement of the KTM’s V4 cylinders is the first couple facing the front wheel and the other couple facing up.

In an attempt to improve the KTM’s performance, the new Swingarm is made from carbon fiber instead of aluminum, and the chassis is a new Tubular steel trellis frame. Although the bike still has the same dry weight of 157kg and a fuel tank capacity of 22 liters, it now has more horsepower and a top speed reaching over 340kph.

Did KTM Make Any Major Changes On The Engine In 2021?

Due to the concession rules of MotoGP to create a fair competition for the engineers, KTM was allowed to change its designs before the season started. Major adjustments are common when transitioning to the non-concession group as the engine needs to last longer when competing throughout the season.

The factories that are grouped under ‘non-concession’ cannot change their engine designs during the season and can only develop and adjust the chassis and electronics, as well as being entitled to a singular aerodynamic update.

The threshold provides a bit of a challenge for specific factories as they cannot make significant changes to gain a competitive advantage; however, KTM won three races and succeeded in achieving eight podium positions regardless of the concession rules.

Of course, this was concerning for the other teams as KTM was now in the position to make major changes before moving to the ‘non-concession’, possibly giving them even more of an advantage. Still, the motorsport director, Pit Beirer, put everyone at ease when he mentioned that there wouldn’t be any new major changes.

He did mention that there was a ‘gap’ in the rules and regulations that would have allowed them to build an entirely new bike but the financial difficulty induced by the Covid pandemic resulted in a freeze affecting any changes to the engine and aerodynamics.

The KTM team decided to improve the current machine without disposing of too much of the bike’s materials, as making significant changes would have required a lot of recourse during a very uncertain time.

He went on the mention that there were certain parts all competing teams could improve as a result of the freeze and that they were trying to create as much of an advantage without implementing a new engine.

What Do The Riders Think About The KTM RC16?

MotoGP racers don’t hold back when it comes to the criticism of the motorbike mainly because any deficiency in the machine will directly impact their own performance on the track. The riders’ opinions are vital components to the development and improvement of the bike, and the more experience they have, the more their preferences and input are valued.

That being said, Brad Binder was confirmed as a factory racer for KTM in 2019 and did not waste any time becoming one of the most impressive riders, being the first South African to win a MotoGP race and the first to win in the premier class with KTM.

Prior to the 2020 season, Brad mentioned that he was confident and impressed with the performance of the RC16 after the alterations. The main changes and improvements were focused on the aerodynamics instead of the engine, but he went on to say that it helped ‘…gain a little margin at the front…’ which also resulted in better bike curving.

Overall, Brad was satisfied with the changes and looked forward to the direction the bike was taking.

Luckily, all of the changes and hard work paid off for KTM when Brad, and the RC16, showed outstanding performance during the 2020 Czech Republic Motorcycle Grand Prix and won the race.

The track went from dry to wet in an instant, and most of the experience riders chose to swap the bikes for a more appropriate weather setup to continue racing the last few laps. However, Brad decided to push through with the RC16 even though the setup wasn’t ideal and the conditions were terrible.

Brad showcased skillful racing, and the RC16 held its own as an impressive machine that continued to deliver under harsh and unforgiving conditions.

The highly advanced engineered KTM RC16 is equipped with a V4 1000cc engine delivering 265ph and a top speed of 340kph. As per MotoGP regulations, only certain alterations were made to the bike’s performance, primarily focused on aerodynamics and the chassis, as KTM is not allowed to make major changes to the engine until the transition to the concession groups.

Louis Pretoriushttps://onestopracing.com
Previous article
Which Oil Is Used In Moto GP?
Next article
What Fuel Do MotoGP Bikes Use?