What Engine Does Mercedes Use In F1? 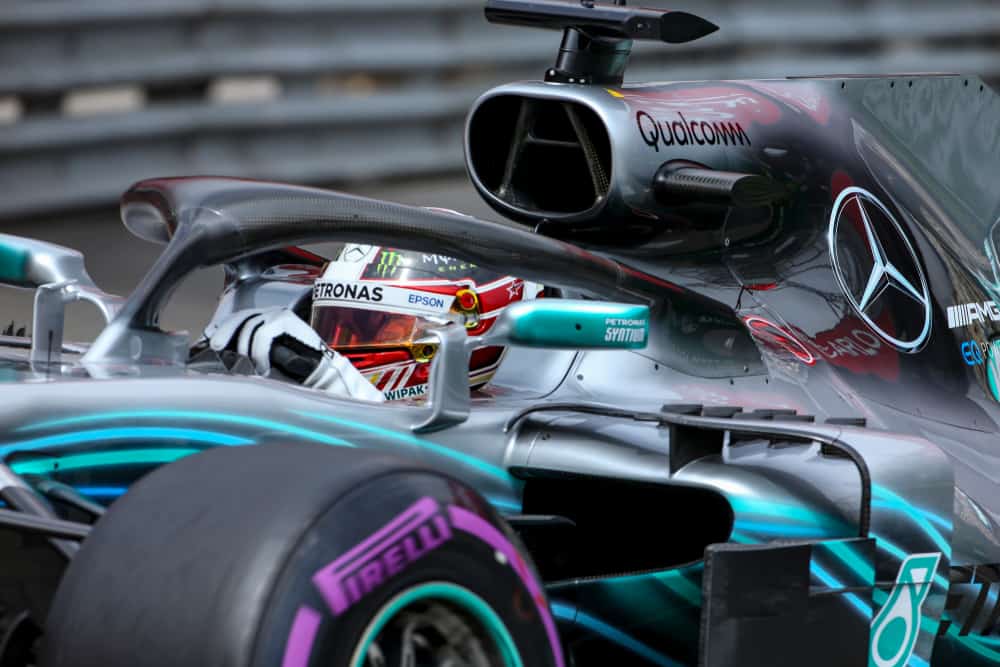 In 1982 Queen Elizabeth, England’s monarch described the year as ‘Annus Horribilis,’ a Latin phrase meaning “horrible year.” It is an apt description of the Mercedes F1 team 2022 F1 season, after coming off the back of eight constructor championships, to get out of the Q3 and Q2 qualifying sessions.

The 2022 Mercedes F1 team used their own Mercedes power unit and made it available to Aston Martin Aramco, Williams, and McLaren. The new regulations in 2022 have changed the hierarchy in F1, and the Mercedes powerplant is being carefully analyzed to try and resolve the power deficit.

Mercedes have played catchup in all departments as they face an ignominious end to their reign as the dominant F1 team. They are behind all leading teams in terms of aerodynamics, engine performance, the impact of the porpoising down the straights, and the loss of crucial engineering staff.

Mercedes has come out of the blocks running since the start of the V6 turbo-hybrid era in 2014.

During this period, the Mercedes engine was the one to beat with the result that the team one eight consecutive constructor championships.

Avis, the car rental company, advertised that “they were No 1”. Hertz, the second-largest company, developed the by-line “soon Hertz will be number 1”. Hertz eventually achieved this goal.

Staying at the top is generally more complex than trying to dethrone the organization ahead of you. Companies taking time to try innovations is always easier than pinnacle teams, who have to be cautious to ensure no break in the performance.

It has happened with Mercedes; while teams like Ferrari and Alpine put their 2021 car on the back burner and focused resources on the 2022 car, Mercedes had to keep their 2021 car ahead of the field to ensure they won another title.

Although this was successful, the chickens have come home to roost, and, at best, the Mercedes is a mid-field contender.

In addition, it is easier for the following teams to spot the star engineering staff who have made an impact on the winning team and make them offers they can’t refuse.

What Is Wrong With The 2022 F1 Mercedes Engine?

Team principal, Toto Wolff, argues that there is nothing wrong with the 2022 F1 engine, but the data seems to contradict him.

The Mercedes engine has the most significant number of customer teams, and when you look at the following two tables, it becomes evident that the only common theme is the engine.

This table effectively demonstrates the problems which the Mercedes engine is facing. While the third-place position may not seem like a train smash, the reality is that the team has twice failed to get to Q1 in the first four races.

Mercedes always aims for the top three positions; they are at the bottom of their target group, while Mercedes engines also power the two teams at the very bottom of the ranks.

The following table shows the fastest speeds recorded at the speed trap in Jeddah, Saudi Arabia.

This table graphically illustrates what the Mercedes team is going through.

Mercedes Benz units powered the five teams with the slowest speed trap numbers in Jeddah. While Alex Albon, driving for Williams (Mercedes powerplant), achieved the fourth highest speed, this was an anomaly rather than a genuine race pace.

Even accounting for this, Alex Albon’s top speed was still 6 seconds slower than the Red Bull driven by Sergio Perez.

In Jeddah, Lewis Hamilton complained that he couldn’t even keep up with the Haas car.

Why Has It All Gone Do Wrong For The Mercedes F1 Powerplant?

No one has pinpointed why the car and powerplant are performing so dismally in 2022.

While the Mercedes F1 car has many other problems, including the famed “porpoising,” which affects the vehicle handling, the engine deficits are unclear.

The engine development has been affected by the following factors.

The FIA regulations have stipulated a new fuel for the 2022 year in its drive for sustainability.

The f2022 fuel has to conform to the E10 specifications.

It means that 10% of the fuel contents have to include a sustainable mixture, which in this case is ethanol.

The change meant the engines needed to be considerably modified, just when Mercedes lost a large part of its engineering staff to Red Bull and Ferrari.

Marko of Red Bull has boasted that Mercedes have lost 50 engineers. Toto Wolff of Mercedes disputes this number but confirms they have lost staff.

The essential staff who have left include.

With such a deluge of people leaving Mercedes, it may account for some of the reasons why the team is struggling to integrate the new fuel and produce a winning unit.

Although it does not affect the engine components, Mercedes have also lost the services of the valuable Gianluca Romani  (who has a master’s in aerodynamics – obtained while he was at Mercedes) to Ferrari.

Will Mercedes Remerge As A Winning Team?

Their success had become so ingrained in Formula One that before 2022 there was never a question of whether Mercedes would be competitive or not.

While it has always been known the new technical regulations presented challenges to the F1 teams, Mercedes always seemed to have a handle on the future.

That doesn’t seem like the case anymore. At the moment, a best-case scenario is that Mercedes is a team that will remain third on the points grid. Even this position is in danger after the qualifying sessions and the sprint race in Imola.

The problem which Mercedes faces is three-fold.

new regulations seek to prevent teams from further developing their engines (apart from rectifying reliability issues) on the following dates.

The cut-off date was March 2022, when the development of the following components was frozen.

The second cut-off date was September 1, at which point all manufacturers must submit their final designs.

After these dates, and until the new 2025 engine is launched, they are stuck with what they have.

They Have Lost Key Staff

While not wanting to besmirch the staff who ate left at Mercedes, the loss of essential staff will make it harder to address the deficit in power.

They Haven’t Identified Where The Problem Is

Mercedes have not narrowed down the search to address a fix by their admission.

To Toto Wolff’s credit, he is not blaming any department and concentrates the search across the whole car.

Mercedes uses the engine manufactured by their in-house division, and despite great success for the last ten seasons, they are now on the back foot and struggling to keep up with the leaders.

The organization has suffered several setbacks, not the least of which is the loss of crucial engineering staff, which has made finding and fixing the problem more challenging.

Louis Pretoriushttps://onestopracing.com
Previous article
What Engine Does Ferrari Use In F1?
Next article
Can You Take Food And Drink Into Silverstone F1?