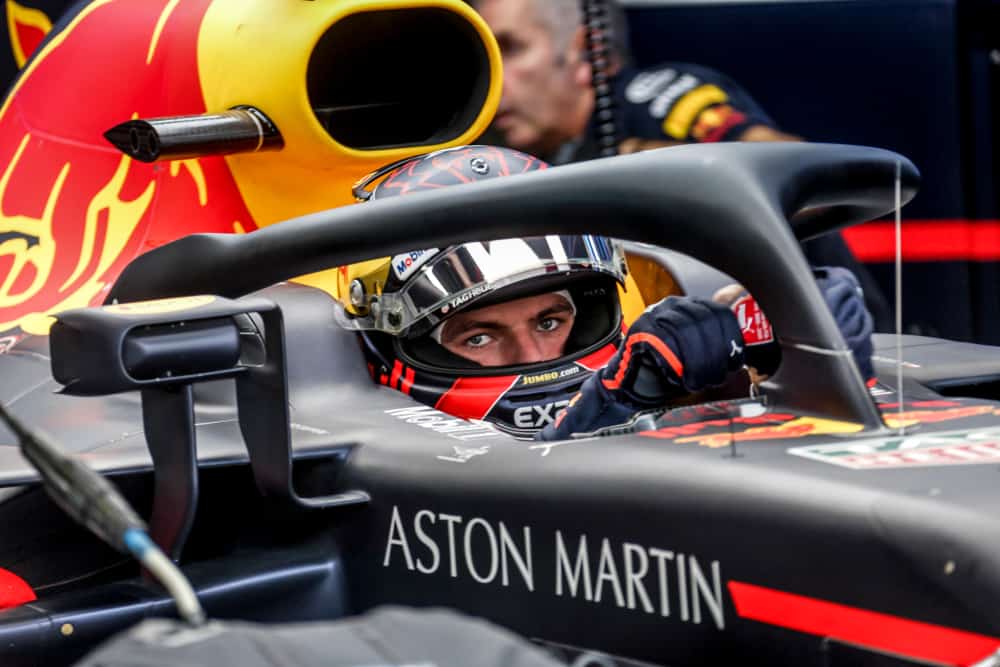 Every year, F1 vehicles change, and not just for the sake of it. New safety features get added while new technologies develop that help cars go faster and handle better. However, one of the most significant changes came in 2018, when the halo was first introduced. Formula One cars have never looked the same since, but what is the halo?

The Formula One halo is a safety device made from grade 5 titanium steel that goes directly above the driver’s cockpit. The name halo is used because of its shape and because it acts as an angel by keeping the drivers safe.

In this article, we will take an in-depth look at what the halo is, what it does, and much more. I have become a massive fan of the halo, and I think Formula One cars today look incredible because of it. For everything you need to know about the Formula One halo, keep reading this article.

When Was The Halo Introduced To F1?

If you watch previous F1 races, you will notice that the halo has not always been in F1. In fact, it is a recent innovation that has revolutionized the safety aspect for F1 drivers. Let’s take a look at when the halo was introduced into F1.

Before the 2018 F1 season, the newest innovation in motorsport safety was announced by the FIA. So, 2018 was the first season that formula one teams used it. The halo has remained in F1 until today, and it will stay in F1 for the foreseeable future as it has proven its worth.

Although it was in 2018 that the F1 halo got introduced, it was being conceptualized long before then. In 2016, we already had a rough idea of what the halo was and that it would be implemented as a safety feature for all F1 cars.

In 2015, the term “closed-cockpit” was already making its rounds within motorsport. However, when many drivers were interviewed about it, most of them would state that they were not huge fans of the idea. However, they understand the safety implications. Below is a video of Sebastian Vettel giving an interview about the proposed “closed-cockpit” idea.

Does The F1 Halo Work?

The F1 halo is a necessary addition to Formula One because of its safety value to every driver. However, there are several negative effects that it has on vehicles. Because of this, the halo needs to justify itself. To do so, it needs to work, so the question is, does the F1 halo even work?

Since its implementation in 2018, the F1 halo has proven time and again that it works. There have been a few accidents since then that would have been fatal if not for the halo. Sometimes, a massive accident can look more severe than it is, while at the same time, few don’t look dangerous, but upon close inspection, you can see that the halo possibly saved someone’s life.

A recent example of the halo working was at the Monza Grand Prix in 2021. Max Verstappen and Hamilton clashed together and watching the slo-mo, you can see Max Verstappen’s tire on top of Hamilton’s Halo. If the halo weren’t there, Hamilton would have had the total weight of a Max’s car on his head. See the below video from the F1 YouTube Channel.

What Is The F1 Halo Made From?

When you witness some of the accidents that can happen in Formula One racing and all types of motorsports, you might wonder why such a simple gadget works. Well, it lies in its design and its construction. Let’s take a look at what the F1 Halo is made from.

That said, the halo can withstand the force of a double-decker bus, perhaps even more. There are times when it is not a double-decker bus on top of your car, but instead an F1 car. Below is a video of the halo protecting Charles Leclerc from what could have been a devastating injury. See the below YouTube video from the F1 channel.

Do All Formula Divisions Use The Halo?

Most people know of Formula One and Formula Two. Those are the two most prominent divisions within the motorsport world. However, there are more divisions than that. Now, we are not talking about go-karts. Here are the five divisions in formula racing:

Within all of these formula racing divisions, the halo must be used; it is mandatory. They will continue to be used in the foreseeable future because they bring a lot of safety to the cars.

What If The Halo Does Not Work?

So, we must remember what the halo is. It is a safety addition, not the only safety feature. Many people wonder what happens if it doesn’t work. Does that mean that it is not essential? What happens to the driver in that scenario? Well, let’s try and answer your questions.

There are times when the F1 halo won’t work. It is a safety feature designed to protect the head of the driver. That means that if a driver experiences a crash, they will still experience every single aspect of their impact minus the danger of things flying at their head.

An example of the halo not working was with the recent tragedy and passing of Antoine Hubert, who passed away after getting into an accident. However, the halo had nothing to do with his death. His car bounced off the barrier and started spinning. Correa could not avoid Hubert and t-boned his vehicle.

How Does The F1 Halo Work?

The F1 halo has three sections. The most notable is the middle prong. It is made from reinforced aeronautics grade titanium, which means it can withstand almost any force placed on top of it. So, firstly, it does not squash. The middle prong is by far the most important.

It is thin enough so that drivers can see past it without too much effort. It is also strategically shaped to deflect anything that is thrown at it. The spaces between the three prongs are small enough so that dangerous objects cannot get through; otherwise, the halo would be pointless.

The top of the halo is designed strategically. If an F1 car flips over, you no longer have to rely on the driver tucking in or whether the helmet can protect their head. See, it acts almost like a roll cage in some senses, and because it is made out of highly durable materials, it does not break while sliding on the asphalt surface.

We have written a recent article about how drivers see the road. It is a question many people ask because they see the drivers sitting so low and with a halo right in front of them. In that article, we discuss the halo. I highly recommend checking out that article.

The driver looks past the halo. The center prong is thin enough not to obscure their vision. At the same time, there is no doubt that it took some time to get used to when the halo was introduced. However, the drivers have adapted.

The halo almost becomes part of the driver’s vision, and in some cases, it can help a driver by acting as a cursor. To give you an idea of how an F1 driver sees the road, below is a video of Pierre Gasly on one of the busiest tracks in the world, Monaco. In the video, you can see that the halo does not get in the way.

Do F1 Teams Have To Use The Halo?

Formula One teams are responsible for the development of their vehicles. However, the FIA, the governing body for formula racing, set out its guidelines and standards. Each car must adhere to these standards.

The halo is an FIA standard. Every car must be equipped with one. If a vehicle does not have a halo on, the team will not be eligible to race which is the most severe punishment that can be handed to a team.

There are situations where teams bend the rules and get caught out by the FIA. In most cases, they receive a fine at most. It is rare for a team to be disqualified for not adhering to the FIA rules. However, if you were to show up in a vehicle that doesn’t have a halo, you would receive the most severe punishment, which is not being able to race.

Who Develops The F1 Halo?

As mentioned, Formula One teams are responsible for the development and maintenance of their vehicles. The FIA does not produce any components for racing teams, that is up until recently.

Three manufacturers are authorized to produce the halos. This prevents teams from trying to cut corners in terms of safety and reducing weight. Remember, the titanium steel that the halo is made out of is not light. So, you might expect teams to try and cut corners.

The halo weighs 9 kg (20 lbs). It adds a significant amount of weight to the vehicle compared with other body parts. It would be easy for teams to cut corners if they produced it themselves. However, because the FIA oversees its production, no corners are cut.

Did The F1 Halo Save Romain Grosjean’s Life?

During the 2020 Bahrain GP, Romain Grosjean was involved in what looked like a horrific accident. Not only were viewers taken aback and concerned for his safety, but many of the drivers were asking their teams if he was OK. What exactly happened, and how does the Halo factor in?

Grosjean lost control of the car and slid across the track where he cut in front of Daniil Kvyat.  Because of his speed and momentum, he crashed into the barrier, but instead of stopping his vehicle, the railing gave way, and he went straight through it. This ripped his car in half. However, the halo stayed intact. After all, it is made from grade 5 titanium steel.

Because the halo stayed intact, it meant Grosjean had no contact with the barrier. If he did, it would have certainly been fatal. The halo had nothing to do with stopping the fire. It just prevented him from being cut by the barrier.

Grosjean emerged from the flames, and in a tweet posted by the Formula One Twitter page, he says that he was not for the halo a few years back, but it certainly saved his life, and he is grateful.

Romain Grosjean speaks while in hospital

What If A Driver Is Taller Than The Halo?

When a driver signs for a team, they don’t give them a generic car made for everyone. Instead, the inside of an F1 car is tailor-made for the driver. That is extremely important to keep in mind during this section.

F1 drivers sit low because the closer the vehicle’s center of gravity they sit, the better the car handles. It does get somewhat technical, and we want to try and avoid getting into too much detail. However, you can be sure that no driver will be taller than the halo.

You get some toll drivers in Formula One. Many people have a misconception that it is a sport for shorter-stature people. That is far from the truth, and if we take a look at the current rise of George Russell, who stands at 1.85m tall, your height doesn’t play a significant role.

Louis Pretoriushttps://onestopracing.com
Previous article
Why Are There 2 Drivers Per Team In Formula One Team?
Next article
Motorcycle Vs Drag Racing Helmets: What’s The Difference?