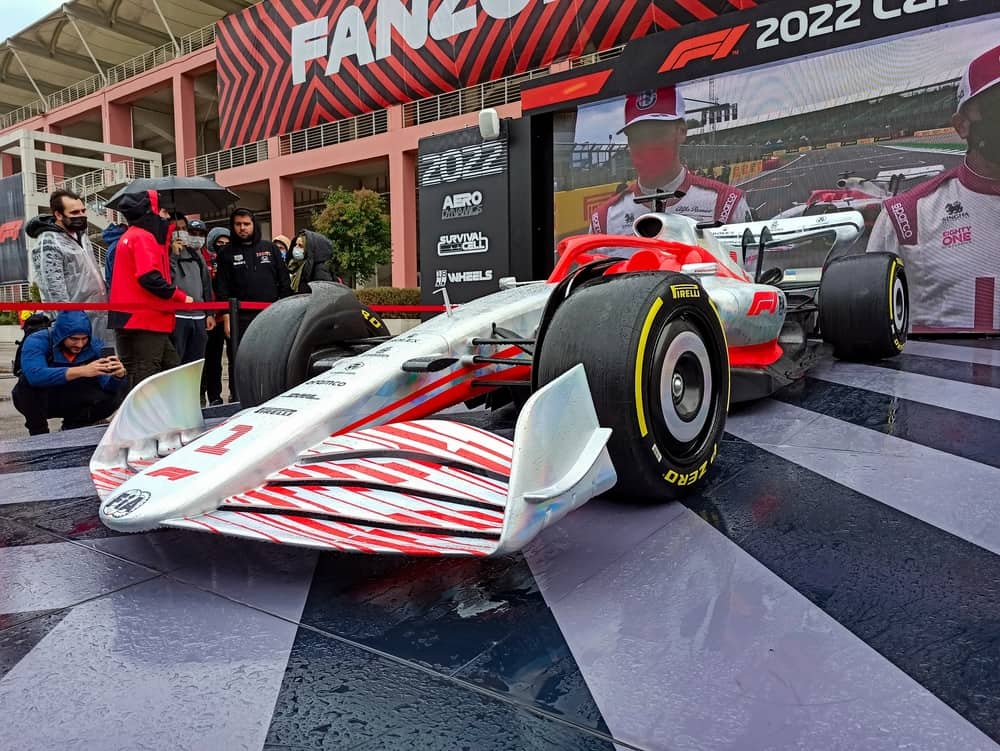 After an action-packed and controversial Formula 1 season in 2021, the sport is back in 2022, and things will be looking quite different. There is a lot that is changing, and it’s not just the cars, so I decided to investigate and see what is changing in F1 in 2022.

There are numerous changes in F1 in 2022. Due to new aerodynamic regulations, the cars will look very different, but the engines will stay the same, remaining 1.6L V6. There are also several changes in the driver line-ups, with Alex Albon and Guanyu Zhou joining the paddock.

2022 represents the beginning of a new period of Formula 1. Thanks to a whole host of recent aerodynamic changes and regulations, the cars will look very different. The engines will stay the same, but with an engine freeze, it’s vital that teams get them right this year. Cars will also be safer than ever, and there’ll be two new drivers on the grid. There is a lot to unpack, so let us get into it right away and see what is changing in F1 in 2022.

What are the Aerodynamic Changes in F1 in 2022?

The aerodynamic elements of Formula 1 are often the most talked-about because the outside of the car, unlike the engine, is visible to everyone. In 2022, some significant aerodynamic changes are being implemented, and as a result, the cars will look quite different from the 2021 versions.

One of the most significant issues with the 2021 Formula 1 car was that they produced a lot of ‘dirty air.’ ‘Dirty air’ is the air that comes off the back of the car after it’s traveled over the car. This does not affect the car itself, but rather any cars behind it. This means that following another car is incredibly challenging as it results in a lot of downforce being lost. Downforce is vital for F1 cars, as it creates more grip, and more grip leads to increased pace.

As a result of the loss of downforce caused by dirty air, drivers are hesitant to follow cars for very long, which makes overtaking much harder, especially outside of DRS zones. Overtaking is the most exciting part of Formula 1 for fans, so less overtaking reduces the spectacle of the sport.

Lastly, the rear wing on 2022 F1 cars will look quite different from the ones we are used to. The rear wings on 2021 F1 cars were designed to leave dirty air behind them essentially, and therefore, directly into the path of the following car. Whereas, in 2022, the shape of the rear wings is very different (it’s much more curved on the sides and bottom). The purpose of this is to divert dirty air upwards and over the trailing car, which means it won’t affect its downforce.

The 2022 aerodynamic regulations are meant to reduce the dirty air from cars. The idea is that this will make following another car much easier and hopefully make overtaking simpler, and therefore, much more frequent.

Part of these regulations is the inclusion of wheel covers. The intention behind this is to prevent car designers from diverting air through the wheels, as this produces a lot of dirty air. Another implementation is over-wheel winglets, designed to divert the air coming up from the tires away from the rear wing. They will do so in a way that produces less dirty air.

The front wing on cars has also been dramatically changed. The idea behind the new front wing is to make following another car more manageable. This is because it will divert the air to either side of the car, rather than outwards or underneath it.

Another thing meant to make following another car easier is redesigning the bottom of the car. The bottom part of 2022 F1 cars will include a sort of tunnel. This is meant to help produce downforce and less affected by dirty air. The 2021 F1 cars contained a lot of aerodynamic features that channeled air downwards. But, they were on the top part of the car, particularly around the bargeboards and floor, and were, therefore, more susceptible to being compromised by dirty air.

The most significant changes in the 2022 Formula 1 car are the aerodynamic changes. In the engine department, not much will be changing. The same 1.6-liter V6 engines will be used next year. Teams will be able to develop the engines, and therefore, we might see some changes in the Constructor’s Standings next year, but they’re essentially just upgrading the 2021 engines.

However, the big talking point regarding engines is that there will be a freeze on all engine development coming into effect at the start of the 2022 season. This engine freeze will last until 2025. This means that teams will have one shot at developing their engine for the 2022 season, and if they get it wrong, they won’t be able to scrap the whole idea and start again. This has put considerable pressure on the engine designers to get the 2022 engine spot on; otherwise, they’ll pay the price in the upcoming seasons.

The engine freeze initiative was pioneered by Red Bull, as they will be responsible for maintaining their own engines (and AlphaTauri’s) from the 2022 season. This is due to Honda, which manufactures the engines for Red Bull and AlphaTauri, having pulled out of the sport at the end of the 2021 season. Honda will still manufacture the 2022 engines.

While Red Bull has established a powertrains unit to maintain and produce their engines and will still be assisted by Honda (until 2025), they do not have the capacity to develop their engines every year, as the other manufacturers do. This will help ensure Red Bull does not have to turn to Renault, Ferrari, or Mercedes to provide their engines, and therefore become a customer to another team already in F1.

The new fuel being used is to help reduce F1’s carbon footprint. This is to produce more sustainable engines once the current freeze on engine development ends in 2025. The goal is to have the 2025 Formula 1 engines run on 100% renewable fuel and for the sport to be Net Zero Carbon by 2030.

If you’re interested in learning more about F1’s planned shift to using fully sustainable fuel, read this article on Formula1.com.

However, the new fuel is causing some performance for engine manufacturers. The increase in ethanol used in the fuel has caused a drop in horsepower, as ethanol is not ideal for producing increased horsepower in high-performance engines. This is proving to be an issue for some teams, as reports have emerged that Ferrari and Alpine believe they have overcome this disadvantage.

In particular, Shell, which provides fuel for Ferrari, has been hard at work at recovering the horsepower lost by the new fuel, and it is believed that they have successfully done so. This is a good sign for Ferrari, who have reported positive developments regarding their 2022 engines, as they look to start fighting at the top end of the field again.

What are the Changes in Safety Regulations in F1 in 2022?

Formula 1 is getting safer every year, and 2022 is no exception as several changes to the 2022 cars are meant to make driving safer. Many of these changes are based on previous accidents where the safety features could have been better.

In particular, there have been lessons learned from Romain Grosjean’s major crash during the 2022 Bahrain Grand Prix, where his Haas burst into flames, and F2 driver Anthoine Hubert’s fatal accident during the F2 race in 2019 at Spa Francorchamps.

Regarding Grosjean’s accident, the fire was caused by the fuel lines severing and the fuel igniting. The 2022 car has been designed to ensure that the power unit will safely separate from the chassis without exposing the fuel lines in the case of a severe accident. What happened in Grosjean’s crash was extremely rare, as the cars are powerful and are likely not split in half, but it is essential to ensure that if it does happen, the fuel does not pose a threat.

In response to Hubert’s accident, the nose section has been made longer to absorb more of the energy from the accident. The sides of the chassis, particularly those around the driver, have also been made more robust to resist T-bone crashes. The chassis will also absorb much more energy, especially during front-on collisions.

All of these changes to the safety features of F1 cars will ensure that drivers will be able to race harder, knowing that if something is to go wrong, there is an excellent chance that they’ll walk away from the incident uninjured.

It’s not only the cars changing in Formula 1 in 2022, as there are numerous changes to the driver line-ups for the 2022 season.

Both Kimi Raikkonen and Antonio Giovinazzi left Alfa Romeo at the end of the 2021 season. Raikkonen called an end to his F1 career and retired at the end of 2021, leaving behind an incredible record, including multiple races wins and, of course, a World Championship. He also has the record for the most races completed in the sport, so his departure means that F1 has lost an incredible servant to the sport.

His former teammate Antonio Giovinazzi left at the end of 2021, as Alfa Romeo opted not to extend his contract after three years in the sport. He will now join Dragon Penske in Formula E for the 2022 season. However, he won’t be entirely out of F1, as he will share the reserve driver duties for Ferrari with Mick Schumacher for 2022. This means we’ll still see him in the paddock for half of the races in 2022.

Alfa Romeo opted to go for a mix of experience and inexperience to replace their outgoing drivers. After five successful seasons at Mercedes, Valtteri Bottas will race for them in 2022. He will be joined by rookie Guanyu Zhou, who raced for UNI-Virtuosi Racing in Formula 2 in 2021, where he finished third in the driver standings. He also won the Formula Regional Asian Championship. Zhou is also part of the Alpine Driver Academy and will bring a lot of sponsors to the table, which is invaluable for a team like Alfa Romeo.

Zhou will not be the only new driver on the grid in 2022. After a year out of the sport, Alex Albon will race for Williams in 2022 after being dropped by Red Bull at the end of 2020. The Thai driver will be replacing his good friend, George Russell, who was finally promoted to the much-coveted Mercedes seat for 2022. Russell will partner with his fellow countryman Lewis Hamilton, looking to bounce back from an agonizing defeat to Max Verstappen in 2021.

Otmar Szafnauer also stepped down as team principal of Aston Martin. At the time of writing, he has not joined another team, but he was strongly linked with Alpine last season, so it would not be surprising if he ended up joining them for the 2022 season.

With numerous changes implemented in Formula 1 in 2022, all of which are designed to make racing safer and more exciting and reduce the gap between teams, the 2022 season will undoubtedly be entertaining. There are new drivers on the grid and others looking to prove a point. And, of course, Lewis Hamilton will be out for revenge and looking to make history by being the first driver to reach eight World Championships. One thing is for sure, that first “It’s lights out and away we go” can’t come soon enough.