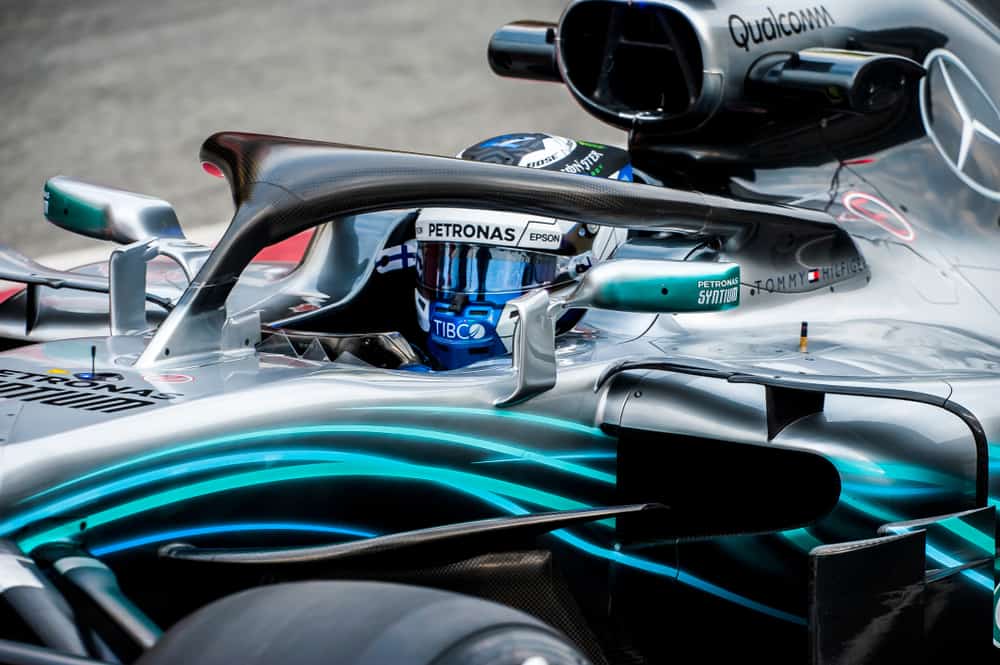 For those who avidly follow Formula 1, the concept of aerodynamics, slipstreaming, ground effects, downforce, and drag is one we hear a lot of but probably don’t understand fully. The thought that something as basic as air can have such an impact on performance is fascinating but hard to comprehend. Dirty air is part of the mystery – so what exactly is it?

Dirty air in F1 is the term applied to the hot, turbulent air left in the wake of a fast-moving car that affects the aerodynamics and, therefore, the performance of the car following directly behind it by reducing the downforce being exerted on it.

As the cars in Formula 1 became more and more complex in terms of their aerodynamic design and faster year by year, the amount of dirty air they produced increased and became a real issue. The effect of dirty air on the ability to overtake and compete in corners was impacting the whole spectacle of Grand Prix racing. It had to be studied, understood, and something done – quickly.

What Is The Difference Between Clean And Dirty Air In F1?

Before we can understand the impact of dirty air on the relative performance of two Formula 1 cars as they compete in a Grand Prix, we need to look at how clean air is utilized to improve their performance.

What Is Clean Air?

Clean is cool, undisturbed air that passes smoothly over the body, wings, and air vents of the car and pushes it down onto the track with what is termed the venturi effect, in precisely the opposite way to how aircraft lift off the ground. It also flows underneath the car through the floor pan, effectively sucking the car downwards and increasing the downforce. This downforce allows the car to be taken through corners faster without sliding or losing traction.

What Is Dirty Air?

Once the clean air passes over the car, creating high pressure and downforce over the body, as well as both front and rear wings, it leaves a hot, turbulent wake of disturbed air. The car immediately behind, without that clean airflow that the car in front enjoys, loses up to 35% of the downforce. The driver has less control of the car because it is not as firmly adhered to the track, and it will slide more easily in the corners.

The Effects Of Dirty Air

We’ve mentioned the loss of downforce and the resultant lessening of control in the corners suffered by the following car. But that’s not all – there are some other negative effects and a few positives as well.

·       The hot turbulent air will cause the following car to overheat. The driver may have to slow down to increase the gap between the two cars to allow his engine to cool sufficiently before he can attack again.

The Positive Effect Of Dirty Air

While lack of downforce creates all these problems for the trailing car in the corners, it also has a positive effect on the straights. The cool, clean air exerts a drag on the leading car while the hot, less dense dirty air behind it allows for slipstreaming by the car behind.

In basic terms, slipstreaming occurs when the trailing car is so close to the lead car that there is little or no wind resistance to slow it down, and it can achieve higher speeds than the car in front of it. It’s often referred to as “getting a tow,” and if the straight is long enough, it offers a golden opportunity to overtake.

Countering The Negatives  – New Regulations in 2022

Dirty air was less of an issue when Formula 1 cars had less sophisticated aerodynamics, but it has become a steadily more serious problem. Cars were quicker, but the racing became less exciting as overtaking took place more by undercutting and pit strategy than the contest on the track. Spectator numbers declined, as did viewership of Grand Prix events on television.

To rebuild the image of Formula 1 and attract fans back to the track and to their television screens, the FIA issued bold new regulations which came into effect for the 2022 season. The goal of these new rules was to drastically reduce the amount of dirty air created by the cars and to make overtaking much easier.

How Effective Have The Changes Been?

It is estimated that the changes have reduced the loss of downforce at a distance of twenty meters from 35% to 4% – that makes an enormous difference, not only to the trailing car but also means that the lead car, when overtaken, can fight back far more strongly.

The result of these changes has already been seen in several races, with overtaking that would have been impossible the year before. There are changes that can still be made, but dirty air is undoubtedly less of a problem going forward.

The turbulent air that a Formula 1 car leaves in its wake will never be eliminated. Still, it can be controlled to a point where it is no longer a hindrance to overtaking, to challenging for position in corners, and as a result, making Grand Prix racing a battle between skilled drivers rather than with factors beyond their control.

There is optimism regarding the future of Formula 1, and the “dirty air” controls brought into the 2022 regulations have gone a long way to make it a more exciting spectacle. There’s room for further improvement, but the start has been made.

Louis Pretoriushttps://onestopracing.com
Previous article
Who Is The Owner Of Red Bull F1?
Next article
Who Are The Best Engineers in F1?