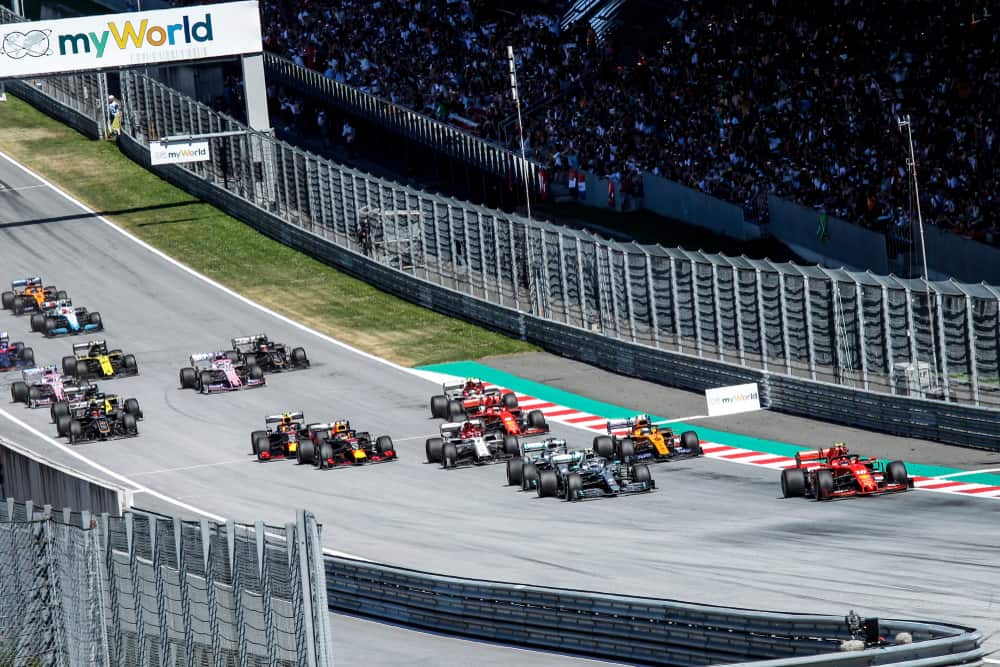 Formula racing is defined specifically as open-wheeled, single-seater, motorsport road racing, particularly with four-wheeled cars. This, however, is a somewhat ambiguous statement, as there are several forms of formula racing. The most important of which are Formula 1, Formula 2, and Formula 3, but what is the difference between these formats?

Formula racing is among the most intense and most prestigious in the world. Motorsport would simply not be as exciting without these exciting racing leagues. Let’s highlight take the time to explore each of the three main Formula racing leagues, F1, F2, and F3, to better understand them and highlight the differences between them.

F1, F2, and F3 can be confusing at first, but upon closer inspection, it is clear to see that these racing formats are very different.

F1, F2, and F3 are all types of Formula motorsport racing leagues. F3 is the high-end of junior racing, F2 is a little more intense, and the drivers are on their way out of amateur status, and F1 is the highest league with the most intensity, the highest speeds, the best drivers, and the biggest budgets.

Formula racing is very expensive and extremely competitive. The driers race in open-wheeled, single-driver cars around some of the most dangerous racing tracks in the world, t some of the fastest speeds possible in motorsport.

The racing format between these three race leagues is largely similar, but there is some key difference to note. F1 is the biggest, most prestigious, and fastest version of Formula racing.

These cars are the biggest, with the most power and performance, and the drivers are the most skilled. F1 cars are significantly faster than the other leagues in Formula racing, and the teams have significantly larger budgets, allowing for more intense competition.

Many motorsport fans enjoy watching the lower levels of the Formula racing league because the racing is very close and very intense. Formula 3, for example, has 30 drivers per race, and the rules in this league are laid out to change the driver lineup over the two-race event to make racing fairer.

This leads to a lot of spectacle on the racetrack that is very enjoyable for spectators.

All of these comparisons are very broad, but these are more general descriptions of the races to begin to highlight what they are like and what their differences are.

This is because all Formula races must follow very strict rules and regulations. All Formula racing must follow the rules regarding the build and performance of the car, the parameters of the race, the scoring and points system, the racing regulations regarding competition, and many other factors that teams and drivers must adhere to.

Let’s take the time to go a little deeper into each of these types of Formula racing, to define what they are, and to define how they compare to one another on a much more focused level rather than the broad comparisons that we have made already.

Formula 3 is the highest junior league in Formular motorsport. These teams and drivers in this league must conform to very strict rules and regulations. Let’s highlight some of the important regulations in F3 and detail some of the defining features of this league compared to F2 and F1.

The car that drivers use in Formula 1 must adhere to specific regulations to be allowed to compete in the race.

F3 cars must use stock-derived, 6-cylinder naturally aspirated engines with a 3.4-liter capacity and a 28mm width restrictor. These engines produce around 380 horsepower and are fueled by gasoline that is comparable to that of a normal road car. All F3 cars are made with the exact same chassis.

The cars have a minimum weight of 550kg, including the driver, they must have rear-wheel drive and two-wheel steer only, a sequential gearbox with a maximum of 6 gears excluding reverse, and must have no more or less than 45 liters of onboard fuel capacity.

Formula 3 races are held over a weekend, as are the other Formula race league races. However, Formula 3 has a slightly different format than the other leagues.

F3 events consist of a practice session and a qualifying session on Friday. Saturday holds two races. The starting positions for the first race are determined by the qualifying sessions, but the first 12 positions on the grid are reversed. This means that the drivers who qualify 12th will start in pole position.

The starting positions for the second race are determined by the finishing positions of the first race, also with the reverse-pole structure for the top 12 drivers.

The third race takes place on Sunday, ad this race is held with the starting positions incorrect order from the qualifying sessions.

The F3 scoring system is more straightforward than the race structure. The first 10 drivers to finish the race are awarded points, regardless of their starting positions.

The points are awarded as follows for the 3 races in the F3 race weekend.

The points are awarded to the drivers according to the race results. The drivers’ points are added up to determine the winner of the Drivers’ Championship at the end of the racing season.

Each team is allowed to have three drivers represent them on track. The points that each driver wins combine for the total points awarded to the team. The team with the most awarded points at the end of the racing season wins the Teams’ Championship.

Formula 2 is a step up from Formula 3, but it is still not quite as intense as Formula 1. That being said, everything in F2 is faster, more intense, and more prestigious than F3.

Here is the important information that you need to know when comparing F2 to F3 and F1.

In Formula 2, the cars are more powerful and faster than the cars in Formula 3.

The minimum weight of an F2 car must be 755kg, including the driver. All F2 cars use the same carbon fiber chassis; they are equipped with a 6-speed sequential gearbox, rear-wheel drive and front-wheel steering, 125 liters of fuel, and sophisticated electronic systems and suspension.

Formula 2 has a unique racing format in the Formula race series. The F2 race event takes place over a weekend; as with the other Formula leagues, there is practice and qualifying on Friday, but there are two sprint races held on Saturday and a feature race on Sunday.

The feature race on Sunday is longer and more important than the sprint races held on Saturday, and the starting positions of the drivers are in order of the Friday qualifying results.

The top 10 drivers in the race are awarded points for their race position finish. The points awarded decrease from first place to tenth place, and any driver finishing lower than tenth place is not awarded any points.

Formula 1 is the biggest, fastest, most intense, most prestigious, and most expensive form of Formula racing. This sport is among the most popular, the most expensive, and the most highly regarded motorsports in the world. Many regard F1 to be the antithesis of motor racing.

These are bold statements, but only Formula 1 can claim to hold true to any of them. Let’s go over the important information required to compare F1 to the lower Formula racing leagues.

The F1 race car is the biggest, fastest, and most powerful car in Formula racing.

The race cars in F1 are equipped with 1.6 liter V6 hybrid turbocharged engines with up to 1000 horsepower. The cars are capable of race speeds in the range of 370km/h, only take 2.6 seconds to achieve 100km/h, and are the most efficient engines in Formula 1 history.

These cars are permitted to carry 145 liters of specialized fuel. The F1 car is permitted to use unique chassis and racing setups; they must weigh a minimum of 740kg, including the driver, and they are equipped with 9-speed seamless-shift semi-automatic sequential gearboxes.

There are no reverse-order configurations in Formula 1.

Some race events use the sprint qualifying format, but not every race in the season uses this format.

Points in Formula 1 are only awarded for the top ten drivers in the feature Sunday race. There are extra points awarded for drivers who qualify in the top three positions if there is a sprint qualifying for the event, and there is an extra point awarded to the driver with the fastest lap of the given race, provided that they finish within the top ten.

The points awarded in F1 are as follows:

Formula racing is some of the most competitive and most challenging racing in motorsport.

Formula 2 and Formula 3 are feeder leagues for Formula 1, and many of the drivers in these formats find their way into F1 if they have the skill to compete.

These races are fast, intense, and expensive, but Formula 1 is the fastest, most intense, and most expensive of them all. The lower leagues offer very exciting racing for spectators because the races are designed to focus on driver talent rather than the ability of the cars that they drive.

There are fewer limits in F1, and the cars do play an important role in winning races, but the skill of the driver is the most important aspect for every team.

If you are a fan of one of these Formula racing formats, you are likely to thoroughly enjoy the others as well. Give them a try, watch the highlights of each race, and enjoy all forms of Formula racing rather than only following one league!