What Is Ground Effect In F1? 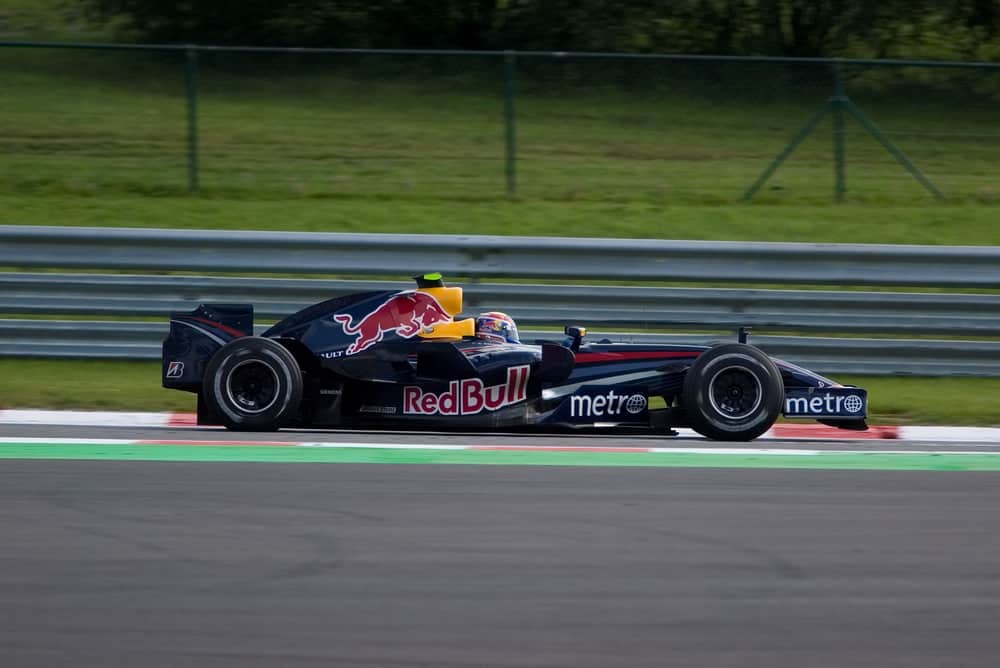 Formula 1 is a sport in constant evolution, and therefore technology and innovation play an important role. In 2022 one of the greatest innovations of the 20th-century returns the ground effect. Faced with this return, many people wonder, what is ground effect in F1 and how does it work?

Ground effect consists of reducing the space between the floor of an F1 car and the asphalt to create a low-pressure area under the car, thus increasing the speed with which the air circulates and creating a greater downforce, even higher than that generated by the wings.

In this way, suction is generated that sticks the car closer to the track and makes the car take the corners at a higher speed. Ground effect was a highly controversial innovation at the time, and 40 years after its ban, it is back in F1. Read on to find out all about it.

Ground effect was used in F1 between 1978 and 1982. The operation of this technology is linked to the so-called “Venturi effect,” which is based on Bernoulli’s principle. When a liquid (air in the case of F1 cars) is constantly passed through a funnel, the speed at which this fluid comes out of the thinner end is greater than that of, the wider end. The pressure is reduced and makes the output speed higher.

This, applied to an F1 car, brings the car’s floor closer to the asphalt to “throttle” the passage of air, creating less pressure than what is outside and making the air circulate faster. As the air passes faster under the car than over the top, a large downforce is created, causing the car to stick to the track and go faster. In short, lower pressure equals higher speed and vice versa.

The operation of the ground effect is the same as that of the wings of the airplanes but inverted. Airplanes make the airflow over the wing faster than under it, causing it to lift. In F1 cars, the floor works like an inverted wing, achieving the opposite effect than in an airplane, which sticks the car to the track.

To understand it better, you can try a simple experiment at home. Take a strip of paper and blow on it: you will see that the strip rises because the air circulates above it is faster than below it.

Therefore, the goal of ground effect is to create a low-pressure zone under the car to increase downforce, thus the car’s corner speed. As the pressure on the sides of the car and the top area is higher, between 1978 and 1982, skirts were introduced to close off the bottom of the car and prevent high-pressure air from leaking under the car.

What Was The First Ground Effect Car In F1?

The Lotus 78 was the first car to introduce ground effect, thus revolutionizing Formula 1 forever. It is said that Colin Chapman, Lotus’ founder, and principal design engineer, and his aerodynamicist, Peter Wright, did not intend to discover ground effect when designing the Lotus 78.

They were studying how to place the radiators on the sidepods to produce the least drag, and in testing, they found extraordinary downforce values. Thus, applying Bernoulli’s principle, the car’s aerodynamics became a large spoiler, an inverted airplane wing. In addition, they added some skirts on the sides of the cars to seal off that low-pressure area.

The Lotus 78 was ready to race in August 1976. Still, Colin Chapman knew that this innovation was far superior to rival cars and that as soon as the competition saw it, it would be copied and surely improved immediately.

Therefore, the Lotus 78 did not debut until 1977, so they had more time to understand its operation and perfect it. In 1977, the effectiveness of this innovation was demonstrated, as the Lotus 78 was the fastest car, tripling the downforce levels of the rest of the grid. However, they did not win the world championship that year as it was a very unreliable car, with 7 retirements in 17 races.

While rivals were trying to understand the Lotus 78, Chapman had already prepared the Lotus 79, which debuted in 1978, a more refined model but, above all, much more reliable. Because of this, Mario Andretti was able to win the drivers’ title and Lotus the constructors’ championship.

As Chapman predicted, other teams like Ligier and Williams copied Lotus’ ground effect and improved on it. In 1980, Alan Jones and his ground-effect Williams FW07 won the title. Lotus could not get any other title with its ground effect.

Why Is Ground Effect More Efficient Than Wings?

In Formula 1, increased downforce can be achieved in many ways, primarily through the wings. The operation of the wings is similar to when we put our hand out the window in a car: if we put it flatly, parallel to the ground, the air passes through it without moving it; however, if we tilt it slightly, the air will push it down or up.

Wings work by moving the airflow downward to generate more downforce. However, they have a problem: they generate aerodynamic resistance since this airflow can also slow down the car. Because of this, teams have designed complex wings and flaps that divert air to the sides and rear.

This creates many spirals of wind, creating turbulence on the car behind and causing it to lose grip, making overtaking much more difficult.

On the other hand, ground effect is aerodynamically much more efficient than the wings since they cause more downforce while braking the car less and producing less turbulence. Ground effect causes very little drag, so power is generated at no cost.

Because of this, during the 1980s, there were even teams that designed cars without a front wing, as the downforce generated by ground effect was so great and efficient that they could run without it.

Why Was Ground Effect Banned In F1?

Ground effect is wonderful; however, like everything in life, it has its drawbacks. The FIA banned the use of ground effect in 1983 for safety reasons because it was very dangerous and caused numerous accidents.

As we saw earlier, teams began to introduce skirts on the car’s sides to close off the underfloor and prevent high-pressure air from leaking under the car. These skirts were placed as low as possible for maximum efficiency, so they skimmed the ground and had a small suspension to adapt to the track.

However, as tracks have many irregularities, potholes, and curbs, one or the two skirts could lift, which created a pressure change under the car, reducing downforce. This could unbalance and even flip the car, as there were two different pressures, being very dangerous.

In addition to becoming more unstable, the cars became very fast and difficult to drive, and at a time when today’s aids like power steering didn’t exist, driving one of those cars was a huge physical challenge. Hence, drivers finished the races truly exhausted. Many complained about this problem.

Ronnie Peterson in 1978 with the Lotus 79, Patrick Depailler in 1980, and Gilles Villeneuve in 1982 are some of the drivers who lost their lives due to accidents caused by ground effect as their cars were launched into the air.

René Arnoux also had an accident in 1980 due to ground effect where he nearly crashed into the crowd, and in 1982 Didier Pironi’s car also went airborne when it collided with Alain Prost’s Renault, breaking his legs.

These accidents shocked the world and put further pressure on the FIA to improve safety, which had been ignored until then, but something had to be done.

From 1983 onwards, skirts were prohibited, and the bottom of the car had to be completely flat, so the cars stopped being as fast in the corners, as they did not generate as much downforce.

In 2022 one of the most transcendental aerodynamic changes in history has taken place. The underfloor and the diffuser are two of the parts most affected by this change, causing the ground effect to return in 2022. But, how is it that it returns if was it so dangerous?

By 2022, the famous skirts of the 80s are prohibited. Instead, small aerodynamic elements on the sides try to do the same thing: seal the underfloor as much as possible so that there is no sudden loss of downforce.

This is much safer as they will never touch the road, but they are not as efficient as skirts. Also, today’s circuits are much safer than those of the 1980s, as they have numerous run-offs and safety barriers and are not as bumpy or uneven.

Another difference in terms of safety from the 1980s is that in 2022 the cars have a wooden plank on the floor to prevent the cars from going too low, and if the driver hits a pothole or curb, the downforce of the car is not lost suddenly.

This wooden plank has been compulsory since 1994. In addition, the floor of the car does not have such a pronounced curvature as before but is smoother and more progressive.

With these changes, the FIA’s goal is to generate more downforce due to ground effect and not so much with the wings, which have been significantly simplified. Although two large wings (front and rear) are still needed, the FIA intends that the new cars will generate less turbulence, and therefore that the cars can be followed more easily and therefore there will be more overtaking.

As we saw earlier, the complicated wings of recent years created a lot of turbulence on the car behind, causing it to lose downforce. Still, with the simplified wings and the new ground effect, there is intended to be less turbulence. It is estimated that the cars behind another could lose up to 50% of downforce before, while now it will be reduced to 18%.

One of the things we will see with the return of ground effect is what is known as “porpoising,” which refers to an attitude of the car caused by aerodynamics, which makes the cars wobble on the straights, going up and down, like porpoises when they swim

This puts even more pressure on the drivers’ heads and necks, and it’s not a comfortable thing to say. Back in pre-season, some drivers have described how their heads bob like crazy and that it gives you a bit of a headache, but they’ll get used to it.

Ground effect was one of the most revolutionary innovations in F1 in the late 1970s and early 1980s. It introduced a new way of understanding cars’ aerodynamics, generating much more downforce and making them faster, although highly dangerous, and therefore was banned in 1983.

The current 2022 regulation allows the return of ground effect to reduce turbulence and improve overtaking due to the advances in safety. Let’s hope there will be more equality between the teams and, therefore, more emotion.

Louis Pretoriushttps://onestopracing.com
Previous article
How Old Are All The Formula 1 Drivers?
Next article
Why Do F1 Tracks Have Curbs?