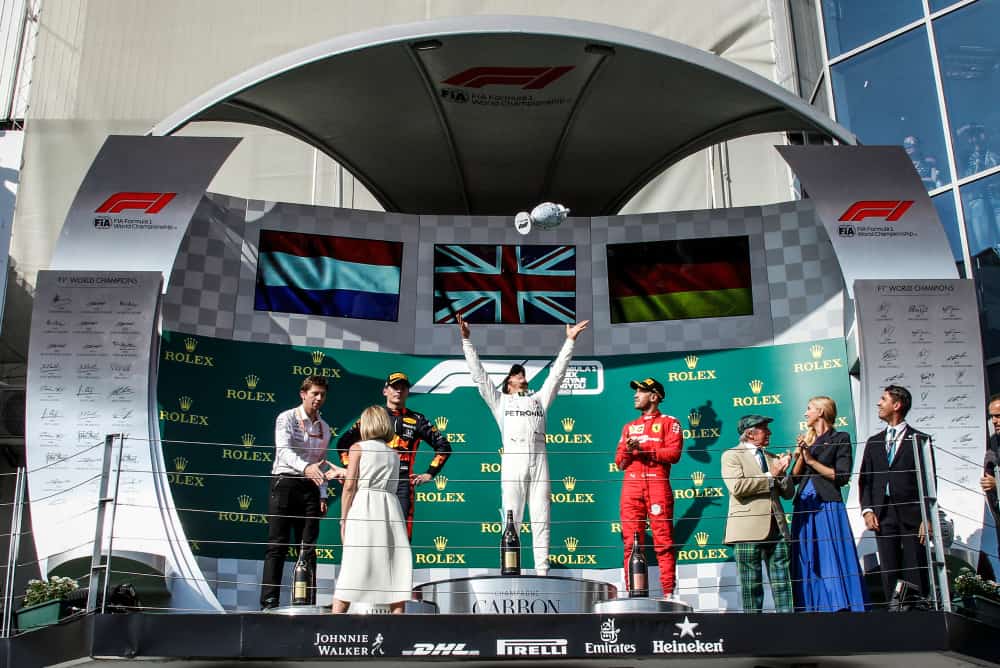 Formula 1 captures the heart of millions of passionate supporters every year. Drivers and teams become iconic heroes, and generally, their good behavior on and off the track warrant this adoration. F1 stands on the shoulders of the founders of motor racing, dating back to 1847.

The FIA ran the first formal formula 1 race at the famed English Silverstone circuit near the Northamptonshire villages of Silverstone and Whittlebury in 1950. Antonio Brivio-Sforz, an Italian from Milan, is reputed to have conceived the idea of the Formula 1 world championship series.

The roots of Formula 1 racing go back to the late 1800s. The history of this remarkable sporting code is fascinating, being steeped in political intrigue, stories about the driving legends, and human tragedy.

The History Of Formula 1

Before examining who started Formula 1, tracing the foundations from which the sport started is essential.

The Birth Of Motor Sport

Motor car racing traces its birth to a period in the late 1800s, just after the invention of the internal combustion-powered car. The first competition was held in 1894 and was a reliability test run between Paris and Rouen in France, over 50 miles (80 km). The car which won did so at the heady average speed of 10.2 mph (16.4 kph).

The first actual race, which was won by the fastest car and driver, was held in 1895. The race was born in France and involved a return journey from Paris to Bordeaux and back over 1,178 km. The winning car achieved an average speed of 15 mph (24.15 km/h).

Although this is a tad slower than the 186 mph (300 km/h) speeds achieved by modern F1 cars, this represented a 50% speed increase over the two races. It is these steppingstones on which today’s F1 technology is built.

Drivers held America’s first motor car race in 1895, running between Chicago to Evanston, Illinois, and back.

The first events involved a race from one town to the next, with a return leg being added in some instances.

The first race held on a “closed” circuit was in 1898 at the Course de Périgueux, where the distance of one lap was 90 miles (145 km); this is somewhat longer than the five to 15 miles of modern circuits!

The first annual competition was introduced by James Gordon Bennett, owner of The New York Herald. These were called the Bennet trophy races, which ran from 1901 to 1905. The Bennet Trophy races were held at the Circuit of Ireland (1903), the Taunus Rundstrecke in Germany (1904), and the Circuit d’Auvergne (1905).

The series was eventually disbanded because the French were unhappy that the regulations stipulated they could only enter three cars.

How F1 Developed Into The Sport We Recognise Today

The racing styles developing in France and America differed. The French opted to hold Grand Prix, which were raced on complex tracks over +-150 km and involved changing terrain,  varying altitudes, speed changes, and the number of curves with different complexities.

Americans and British competitions were held on circular racetracks such as Brooklands near Weybridge in Surrey, England, and the Indianapolis Motor Speedway at Speedway, near Indianapolis. These formats continued, despite the pauses caused by two world wars.

Several race formats developed through the 1920 and the 1930s and included.

During the interwar years (between the first world war and the second), several meetings were held to organize the races under a single world championship

The outbreak of World War 2 stopped these meetings. After the war ended in 1946, organizers restarted the discussions and agreed upon standard regulations.

When And Where Did Formula 1 Racing Start?

Other proposed names included Formula Internationale and Formula A. As the series would be considered the premier racing division, they felt it should carry the title Number 1, hence Formula 1.

In 1949 the FIA announced that the first Formula 1 race would be held in 1950 at the Silverstone Circuit in the United Kingdom.

The first championship was held across seven nations. These were.

The American round was the famed Indianapolis 500 and was only included as a political ploy to make the series seem fully international.

There were no drivers who raced in both the American and European legs of the championship. It took eleven years until, in 1961, Jack Brabham took his Cooper to race in the Indianapolis 500.

Which Manufacturers Started Racing In Formula 1?

Apart from a few exceptions, manufacturers’ cars have always dominated the formula 1 racing series. However, it was only in 1958 when the first award was given for the constructor’s championship. Before this, it was a purely driver-centric competition.

The first race in Silverstone was entered by

Interestingly, Alfa and Maserati are the only manufacturers still building regular road cars under the original brands.

Ferrari, which was to become a cornerstone brand of Formula 1, did not participate in the first season because Enzo Ferrari thought that his 1.5l V12 engine cars would be trounced by the fire breathing 400 bhp Alfas with their supercharged straight-eight engines.

Why Was The First Race Held At Silverstone?

There is no official record of the reasoning that the first race would be held in Britain, particularly at the Silverstone circuit.

Like other countries, Britain had come through the 1939 to 1946 war years and, in those days, still dominated the world with the perception that it was the leading colonial power. This status alone may have been the primary reason.

It helped that Earl Howe, the British representative of the FIA from inception, knew Marquis Antonio Brivio-Sforza well.

Silverstone had a good track record (forgive the pun!), having held two very successful British Grand Prix races in 1948 and 1949.

Whatever the reason, only Britain and Italy have hosted the F1 championships every year since the competition’s inception.

No one person or country can be identified as the originator of the F1 racing competition. From 1894 France, Italy, Britain, Monaco, Germany, Belgium, and America have all contributed to motor racing and Formula 1.

Whoever it was, and whichever country they came from, are owed a debt of thanks by the many millions of supporters who passionately follow the sport today.