Which F1 Drivers Are Friends? 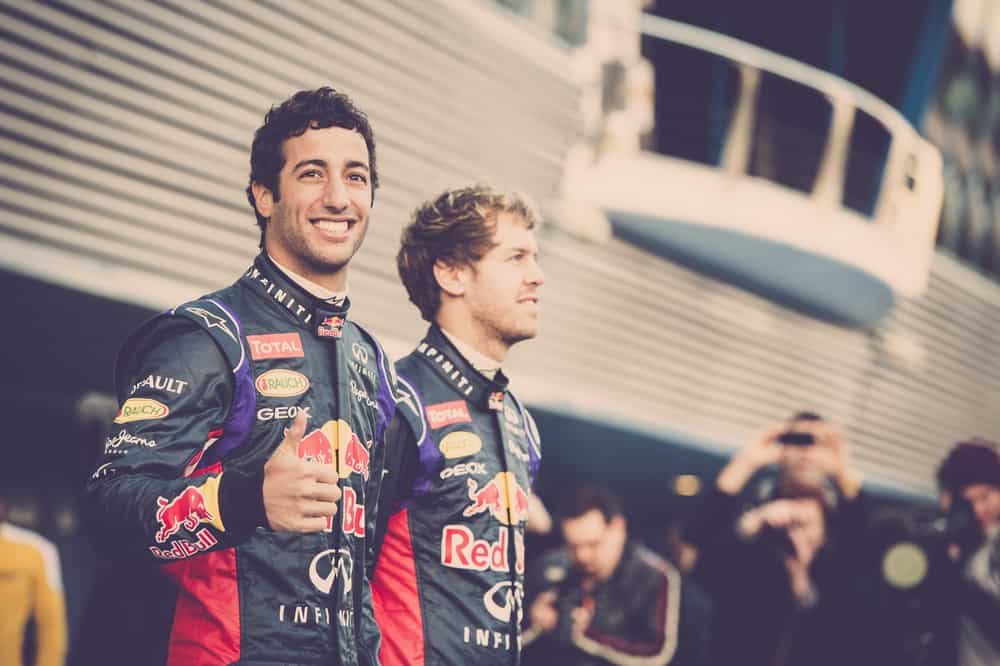 In the past, Formula 1 drivers rarely used to be friends with each other. The competition and the intense rivalry often got in the way of friendships and broke up brilliant friendships in many cases. However, the new generation of F1 drivers are different, and many of them have multiple friends on the grid. But let’s look at some of the special friendships in Formula 1.

The most notable friendships in Formula 1 in 2021 are Sainz & Norris, Gasly & Leclerc, Ocon & Stroll, and Verstappen & Ricciardo. Other close connections include the Twitch Quartet (Albon, Russell, Norris & Leclerc), Sebastian Vettel, and Mick Schumacher.

These drivers are all great friends and are often seen laughing, chatting, and celebrating together in the Formula 1 paddock and outside of it. Some of these friendships have existed for years, while others are relatively new. But what makes them so special?

Affectionately known as ‘Carlando,’ Carlos and Sainz and Lando Norris are perhaps the most well-known friendship duo in the Formula 1 paddock. The two became firm friends following their moves to McLaren in 2019, where they quickly struck up a strong friendship.

It is clear from the many videos of the two of them that they get on very well. The many challenges and other events they did together at McLaren were often filled with laughter and other hilarious moments. These funny moments often revolved around Lando’s extremely picky food tastes and Carlos’s strange pronunciation of certain words.

Even though Carlos Sainz left McLaren to join Ferrari at the end of 2020, the two have remained good friends. They are still often pictured chatting to each other during the race weekend and playing golf during their free time.

Here is one of the many hilarious videos involving the duo. You’ll find a lot more on the McLaren YouTube channel.

The Twitch Quartet, comprised of Lando Norris, Alex Albon, George Russell, and Charles Leclerc, rose to “fame” during the lockdown in 2020. These four drivers, all of a similar age, spent a lot of their lockdown playing racing games with each other and streaming them on the live video streaming service Twitch.

The four drivers used to race against each other in Formula 2. However, Lando, Alex, and George have known each other for a long time because they’re all British. They, therefore, attended the same karting events, although Norris and Russell only became friends with Albon when they began racing in the Formula series. This was because Albon is two years older than Russell and three years older than Norris.

The three British drivers were also promoted to Formula 1 in 2019, so they experienced their rookie seasons together. When the pandemic struck, they turned to online gaming to keep themselves and the fans entertained. Charles Leclerc began to join these sessions, and the four soon struck up a good friendship.

They were also sometimes joined by Red Bull driver Max Verstappen, although this was less frequent.

Here are some of their top streaming moments from the 2020 lockdown: https://www.youtube.com/watch?v=ohW3-QvLbM0&t=32s&ab_channel=FORMULA1

Here is a funny quiz involving all the members of the quartet:

Despite coming from completely different backgrounds, the two drivers have become good friends. Stroll grew up in a life of luxury as his father, Lawrence, is a billionaire. Ocon’s father was a mechanic, and Esteban grew up in a caravan with his parents as they traveled across Europe to attend go-karting races.

They first met when they were competing in karting championships in their early teens. Despite Stroll taking Esteban Ocon’s Force India seat in 2018 after his father Lawrence Stroll led the team consortium, the two have remained friends.

The two drivers grew up karting together in French events and later in other European karting races. Leclerc is from Monaco, which is right next to France, so he spent a lot of time competing in races attended by Gasly, born in France.

In 2019, Leclerc called Gasly, his closest friend on the grid. He said, “We’ve known each other since we were six; we ran and went on vacation together. The bond is particularly strong.”

Their bond is evident as they always seem to be chatting to each other before races, and Leclerc was one of the first people to congratulate Gasly after his first race win at the 2020 Italian Grand Prix. His affection for Gasly was evident, as, after that race, he posted a photo of the two on Instagram, calling Gasly “mon calamar,” which translates to “my calamari.” Gasly responded with “Merci mon petit calamar,” meaning “thank you, my little calamari.”

Also known as ‘Maxiel,’ Max Verstappen and Daniel Ricciardo’s friendship has blossomed ever since Verstappen joined Red Bull in 2016. Despite the big age gap (9 years) and Verstappen only being 18 when he joined Red Bull, the two have become good friends.

Their on-track friendship hasn’t always gone to plan, though. There have been some notable collisions during their time at Red Bull, including the famous one in Baku in 2018, where Ricciardo plowed straight into the back of the Dutchman. However, this hasn’t affected their friendship off the track. The two are still often pictured talking to each other during the race weekend or interrupting each other’s press conferences, sometimes in rather bizarre ways.

Here is one of those bizarre interruptions:

Sebastian and Mick’s friendship is slightly different from those previously mentioned, as Vettel is both a friend and a mentor to Schumacher. Mick’s father, Michael, had a similar relationship with Vettel when he first joined Formula 1.

Vettel has fulfilled Michael’s role for Mick, often acting as more than a friend and providing him with advice and tips about motorsport. He has provided Mick with a lot of help in getting up to speed with Formula 1 and setting up his F1 car. Another example of the support he offered is when Mick drove his dad’s first Formula 1 car around the Silverstone circuit. Vettel gave him some practical advice about using the manual gear-lever on the racing car.

Mick clearly looks up to Vettel and values their friendship a lot, as he often asks his race-engineer after a race where Vettel finished. The two also played soccer with their trainers in the Haas garage when the 2021 Belgian Grand Prix start was delayed due to heavy rain.

Here is the video of the two of them playing soccer together:

Unlike in the past, this generation of Formula 1 drivers have figured out how to be rivals on the racetrack and friends off it. Many of the drivers are good friends, and some even go on holiday or play video games together in their spare time when they aren’t involved in Formula 1 activities.

Louis Pretoriushttps://onestopracing.com
Previous articleWhy Is There No Overtaking In F1?
Next articleWhy Is F1 Merch So Expensive?