Why Are Formula 1 Tires So Shiny? 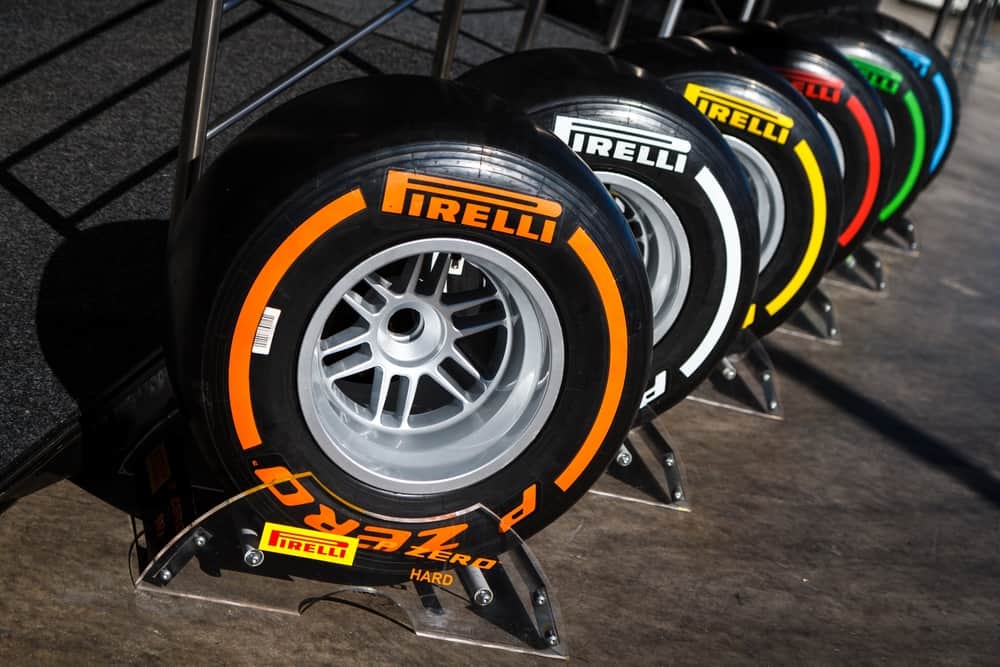 Pirelli manufactures all Formula 1 tires, and even though teams are forced to use the same tire, the tire strategies each use can be quite different and can even be the deciding factor between the winner and those who follow. Strategies include which tire to start the race on, how many times a team should pit in the race, and how the suspension is set up will affect the tires.

Formula 1 tires are so shiny because of the molds that Pirelli uses, which are now are lined with chrome which causes the very shiny surface that the tires have when first fitted to the car. The shiny surface is not reflective of the grip or consistency of the tire and disappears on the first lap.

It seems so evident that tires are one of the most critical components of an F1 car. The reality is that tires aren’t just the medium connecting the Formula 1 car to the track. Sure, they produce prodigious levels of grip, and they provide the traction to get the car moving, accelerating or decelerating, but tires represent so much to F1 racing teams.

Formula 1 Tires Are Shiny Due To The Are Manufacture Method

The reason for introducing the new manufacturing method for the Formula One tires was that, with the previous process, Pirelli found that removing the very sticky and soft vulcanized tires from the old molds was becoming difficult.

The old molds produced tires with slight thread imperfections because the “sticky” soft tires stuck to the molds and were challenging to remove.

Pirelli eliminated the problem with the new method, and tires now conform to the quality required by the FIA.

How are Formula 1 tires made?

Formula 1 tires are not just molded pieces of rubber to enable an F1 car to move. The amount of technology in a Formula 1 tire is awe-inspiring. It all starts at the design stage when the Pirelli engineers research the different structural components and tire compounds.

The First Step Is The Design Of The Tires

The Pirelli laboratory has state-of-the-art computer simulation software, which tracks and predicts grip, durability, and performance on different tracks.

After the simulations have been run, the team then builds a prototype that is extensively run and tested far beyond the forces they will face in an actual race.

Assuming the simulations have been run and the prototype tires passed the various tests, the tires are produced.

How The Tires Are Manufactured

Although the actual tire manufacturing process happens simultaneously, the following lists the different components that make up the tire and the order in which they are formed. Formula 1 tires use other compounds to regular road-going cars to cater to the very different demands. Formula 1 tires are made up of natural rubber, synthetic rubber, and other artificial fibers.

Big steel cords are wound together to form a cable or ribbon-type configuration, called bead wires, which are produced.

Step Two – The Carcass Of The F1 Tire Manufactured

The carcass comprises thin textile fiber cords molded into the rubber. The carcass is the tires skeleton, and this component determines the ultimate strength of the tire and its ability to withstand high pressure. The carcass handles 80% of lateral and circumferential loads.

Step Three – The Belt Of The Formula 1 Tire Is Made

The bead (now molded into the carcass) is directly joined to the tire belt, which comprises rubber-coated layers of steel, fiberglass, rayon, and other materials crisscrossing at angles. The F1 belt protects against punctures and helps the tire’s surface remain in the correct shape profile.

Step Four – The Tread Of The Formula 1 Tire Is Applied

The tread is the outer shell of the tire. Only the wet and intermediate tires have a tread pattern. All other tires are “slicks”; however, they still have an outer shell covering the belt, which we call the tread.

The components are assembled, fitted into the chrome-lined mold, which is passed through an oven, and heated to the correct temperature, which creates the right strength tire; this process is known as vulcanizing.

Once the mold cools down, the vulcanized tire is removed from the mold, and the shiny formula 1 tire is revealed.

Step 6 – The Formula 1 Tire Is Checked For Quality

Once the tire cools down, it is passed through a rigorous quality control process which includes.

A sample of tires is randomly selected for destructive testing to check for the wear characteristics and confirmation that the durability is within specification.

Bar Coding Is Applied To The Formula 1 Tire

Each tire that passes the quality control process is bar-coded. This identification allows Pirelli to track which team receives the tire, the number of laps it completes, and the wear it experiences.

It takes five hours to manufacture each Formula 1 tire. Of course, the manufacturing process is conducted on a production line, and many tires are built simultaneously.

Since the 2019 season, Pirelli has manufactured very shiny tires for F1 cars. The shiny surface is a result of the manufacturing process and has no impact on the performance of the tires. Once the Formula 1 cars have run out of the pit lane and increased the speed, the shine disappears.

Louis Pretoriushttps://onestopracing.com
Previous articleWhich Formula 1 Drivers Have Been Knighted?
Next articleWhy Are Some Formula 1 Cars Faster Than Others?