Why Do Dakar Trucks Have A Crew Of 3? 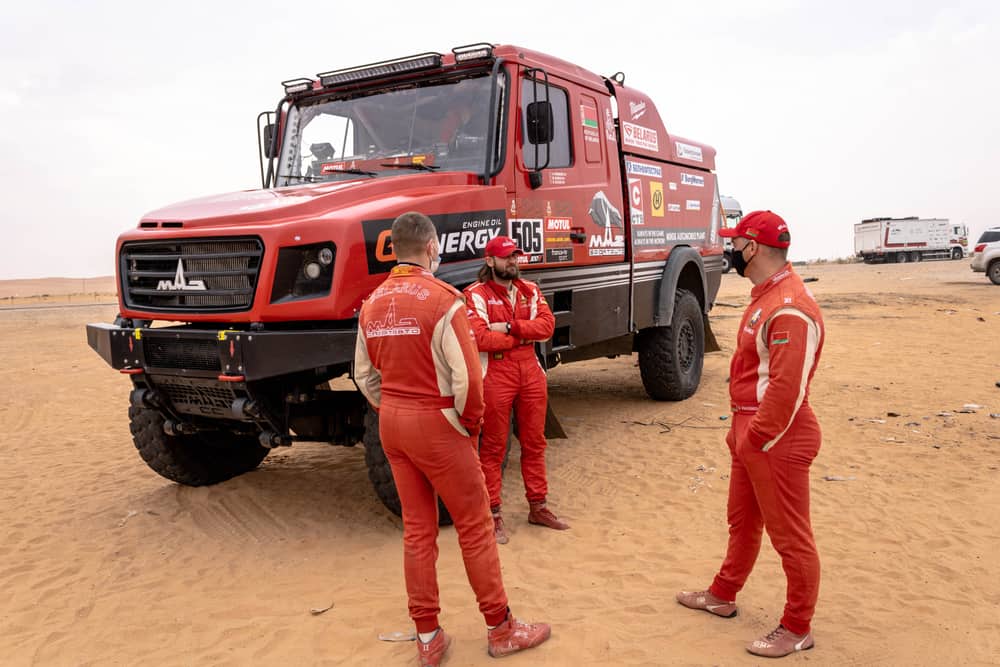 The incredible Dakar Rally is a race that tests of skill and endurance of crews to the absolute limit. There are a few different classes to race in, and I have had the extreme pleasure of sitting in a Kamaz Rally truck. These racing beasts are imposing and impressive, fast and demanding. Unlike the car classes with a driver and navigator, the trucks have a crew of 3, but have you ever wondered why?

The Dakar rally truck has a crew of three to ensure safety and a smooth race. The unit consists of the driver, the navigator, and the mechanic. Without the mechanic, breakdowns would end the race for the team. Changing a tire on a Dakar truck would be impossible as it requires all three crew members.

When the Dakar rally began in 1978, the trucks were there for carrying spare parts, extra fuel, and urgent mechanical and first aid services. They were not allowed to enter the race as competitors. The first time a truck class was run on its own was in 1980, and it was the T4 class. Currently, there are T4/T4.1/T4.2 and T4.3 classes. Let’s take a closer look at each crew member and how important they are to the race overall.

The Dakar rule book says that anyone can enter the race. It would be best if you were 18 years old at least and do not need to be a champion or very accomplished. The idea behind the race is that professionals and amateurs alike can participate and have their skills tested. The only two classes that are governed by a selection process are quad bikes and 2-wheelers.

To become a professional race driver means that you dedicate your entire life to the sport. It’s a lifestyle and an earnest commitment of both time and finances. You will need to maintain a fitness level above average, eat a very well-balanced diet, and be mentally focused. One other aspect of being a rally driver is to have a fearless attitude, not to be confused with a death-wish, but you must have the fortitude to face dangerous situations.

To drive a Dakar truck, you will need to have the following;

As the driver, you are vital to the success of the team. However, you cannot race on your own. Your team is essential to success and safety overall. You will need to meet your navigator and look at all the maps and analyze each leg. You will work with your mechanic to ensure you have all the spare parts, service logs, and first aid requirements.

Your team depends on you for experience, knowledge, and excellent driving ability to safely cross the finish line.

The rules for navigation in the Dakar are stringent and require a very experienced navigator. Unlike conventional navigation systems, in the Dakar, a navigator can only use their roadbook or map book, their Trip Master, and a GPS compass. All other navigation assistance is strictly prohibited.

To be the navigator is essential; the best person for the job is somebody that understands geography and cartography. The navigator is the driver’s eyes and lays out the road and the conditions in a series of short command sentences. Without the navigator, the driver can become lost, have an accident, or severely damage the truck.

The navigator needs to ensure the team passes all allocated waypoints. These are designated checkpoints to ensure all groups are following the predetermined routes.

The only time a navigator is allowed to use the GPS full function is in the case of an emergency, an accident, or injury. However, this will result in a time penalty and disqualification after the fourth use of the GPS.

The third and crucially important member of the Dakar truck crew is the mechanic. On duty around the clock to ensure any part is changed rapidly and without issues, the mechanic hardly sleeps. The driver and navigator can sleep in the bivouac, but the mechanic sometimes works through the night.

Anything can happen during a race depending on the terrain screens can crack, fuses can blow, a tire can get a puncture, or a filter needs urgent replacement in the case of a sand storm.

The Dakar trucks get a hammering through some of the race terrains and usually need serious repairs after a leg. After working straight through the night, the mechanic can catch a few hours of sleep during the next race leg, however bumpy that might be.

The mechanic needs to be wide awake in any crisis. They need to know the truck engine and components off by heart. They need to identify any issue immediately and have to get the truck running in the least amount of time. During the race, the mechanic will work from a computer or a tablet to keep a check on the truck’s systems.

All three crew members wear helmets with microphones inside to be able to communicate. The noise inside the trucks is so loud it would be impossible to communicate any other way. The mechanic also helps with navigation.

What Is Inside The Dakar Rally Truck?

The Dakar truck is built for the rough road, no doubt. It is purpose-built for this grueling race, and here are a few interesting points about them;

If the Dakar truck happens to get a puncture, the whole crew needs to spring into action. Although this seems like a daunting task, these crews are so well trained you will be surprised at how fast they get it done.

How Does The Crew Change A Tire On A Dakar Truck?

In the likely event of a puncture, the Dakar truck’s entire crew needs to get out and help change the tire. These are the steps that will be taken;

The tire change is done in under 6 minutes.

The importance of all three crew members in the Dakar truck is evident. They have such specific roles that it would be impossible to race without all three being present.

The Dakar Rally is the most grueling three weeks of racing globally, and you want the best team members with you.