Why Do F1 Cars Break So Easily? 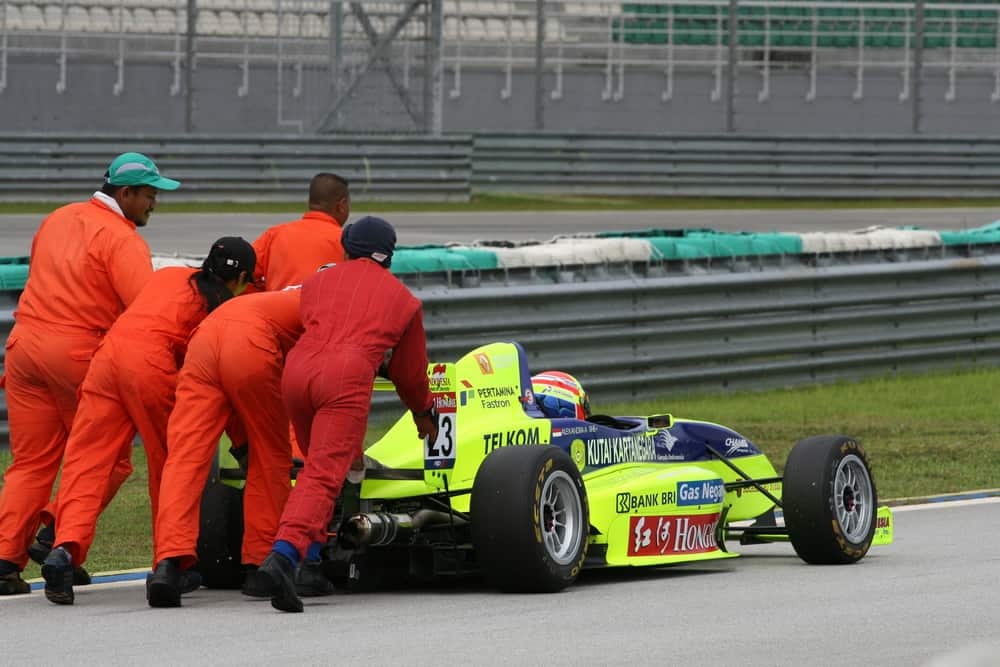 Formula One cars are the safest cockpits you can be in; they are built to protect the driver in every instance but have you ever wondered why they break up so easily on impact?

A Formula One car is designed to go as fast as possible, and for it to reach top speed and gain high aerodynamic performance, the cars are constructed of lightweight carbon fiber to reduce weight. F1 cars are engineered to divert energy away from the driver by shedding parts in a crash.

During an F1 race, even a small collision will have pieces of the car flying and look like it is exploding, with the debris scattering everywhere. Why does that happen? F1 safety is important; why do racing teams build cars that break so easily in a crash? Let’s find out why F1 cars behave so fragile when they come in contact with something.

The Crumple and Shatter Zone

An F1 car that shatters and crumples in a crash greatly reduces the force acting on a driver’s body by dissipating the energy away from the driver. Instead of transferring the force into the driver when a part breaks off, the force leaves the car when it shatters.

While racing in his BMW Sauber, Kubica collided with another car and skid off the track; it launched his car into the air when he hit a bump. The car landed headfirst into a concrete barrier wall and rolled over the track into another barrier. When his car finally stopped, it was unrecognizable.

Robert Kubica hit the concrete barrier at 299km/h and experienced a deceleration of 75G. He walked away from the accident unscathed.

Every broken piece of the car that broke and flew off saved Kubica by dissipating the impact energy away from him. F1 cars are designed with energy-absorbing crumple zones built-in. The cockpit is surrounded by parts designed to crumple and absorb energy in an impact.

F1 cars are engineered extremely strong to handle driving loads but not designed for impact. This is one of the reasons carbon fibers, not metal, are used for F1 car parts.

At the 2014 British Grand Prix, when Kimi Raikkonen crashed, the recorded impact of his car was 46G. He managed to get out of the car with only a few scratches. These are examples of the cockpit absorbing the energy to protect the driver with the crumple zone around it.

Most car parts that don’t crumple protect the driver by breaking off and flying away, stripping energy out of the car as it crashes. F1 cars crash at 200 km/h and above speeds, and still drivers walk away unscathed because of the dissipated force.

When we consider the forces F1 cars are exposed to when there is a crash, it is not surprising that they shatter. With speeds of more than 200 km/h, the slightest bump and touch can cause a major impact on an F1 car and cause severe damage.

In the case of a crash, any damaged part just gets replaced. There is no reason to make the parts strong enough to withstand excessive force because a dent on an F1 race car affects the aerodynamics, and therefore, it is better just to replace the whole part. However, some parts of an F1 car are designed to stay intact regardless.

F1 cars are engineered to reach unimaginable speeds and need to be as lightweight as possible to achieve that. F1 is a non-contact sport, and the cars are designed with no contact in mind. In the unfortunate event of a collision, parts of the car cannot withstand force and will break away easily. F1 cars are limited by weight, cylinder count, and engine size.

Every kilogram saved when designing an F1 car is less that has to accelerate to racing speed and less inertia to handle when racing. Every part of the car has a particular function without influencing the airflow and needs to be as small and light as possible.

Each cart component is built just strong enough for its exact purpose, and cars undergo stringent static and dynamic load tests to ensure the safety of drivers.

F1 has a maximum and minimum weight for each car. The car parts are not designed to withstand contact but are built to make the car go faster.

F1 cars seem so fragile because the ultralight materials used to build the cars are brittle and don’t crumble like metal on impact. Also, with the cars reaching extreme speeds, the contacts might be harder than they look. Some parts are designed to disintegrate at specific impact loads to absorb energy.

If an F1 car were built strong, it would stop abruptly in a collision, and the sudden inertia change could kill the driver. The crumple zone gives the driver some motion, so the inertia change is lower.

A metal part might not break into thousands of pieces if it comes into contact, but as far as F1 is concerned, it needs to be replaced when a part is damaged. F1 cars are designed to last no longer than twice as long as a race. After each race, it is entirely disassembled, and many parts are replaced.

Ultra-lightweight carbon fiber is the preferred material for F1 cars; just like airplanes that fly better when as light as possible, lightweight F1 cars go faster.

Zylon is used to cover the carbon; it is the same material used in armored vests to prevent carbon fiber splinters from injuring the driver in the event of a collision. Zylon is a synthetic polymer and has a tensile strength one and a half times greater than Kevlar. Formula 1 safety regulations mandated that all cockpits have anti-penetrations panels made from Zylon.

F1 aims for the total minimum weight. F1 cars are extremely sensitive to minute aerodynamic changes. As a result, it is better to build the car fragile and light than to build durable and heavy. Metal outer parts of an F1 car would be far too heavy to reach optimum speeds therefore obsolete.

An Extra Layer of Protection Called the Halo

F1 cars are fragile where they should be and built strong where they need to be. The cage surrounding the driver is the strongest area on an F1 car and built from carbon fiber strong enough to protect the driver in case of a collision.

An added safety feature introduced onto all F1 cars in 2018 is the Halo. The Halo is a titanium structure covered in carbon fiber. It is located directly above the cockpit of an F1 car. The Halo is there to protect the driver and can withstand extreme impacts.

The Halo is made from titanium and weighs around 9 kilograms. The Halo was designed and manufactured by three approved external manufacturers chosen by the FIA.

Safety is most important in F1, and the Halo is engineered to take the full force of impact, protecting the driver’s head. It does slightly affect the field of view for drivers, but that is a small price to pay for the safety it offers.

F1 Safety Features During a Crash

Even though an F1 car shatters on impact, many safety features protect a driver during a collision. These safety features have been tested and tweaked through the years to improve safety.

The closed survival cell, also known as the Monocoque, was first introduced to F1 in 1962, made from aluminum invented by Colin Chapman. The aluminum monocoque did not provide sufficient protection to the driver during a collision and was soon phased out.

The first carbon monocoque was introduced in 1982, and since then, carbon composites have been developed through research to better the design. Monocoques today are engineered with a multi-material design to ensure the highest level of safety for an open cockpit.

During a collision, the Monocoque sits tightly around the driver in the cockpit and absorbs pressure from an impact by reducing the force on a driver’s body during a collision. In 2000 F1 required Kevlar fiber to be used inside the cockpit to stop penetration from foreign objects.

The most dangerous incident in a collision is a head-on crash because it allows a lot of exposure to the driver’s body.

The front wing of an F1 car is engineered to shatter on impact. This causes a constant reduction in speed after the collision and limits force on the driver’s body. The crumple zone of the front nose absorbs most of the pressure from an impact.

The HANS device is there to protect the driver’s shoulders and neck. The HANS limits a driver’s movement within the car. The HANS works during a collision and high levels of G-Force.

It is placed around the neck and over the shoulders and clipped onto the driver’s helmet.

The headrest is the part drivers take off from around their heads when they get out of an F1 car.

The headrest provides protection similar to the HANS but is engineered to provide more protection to the driver’s head.

The headrest limits movement of the driver’s head when high levels of G-Force are experienced to reduce the force on the neck and head. The headrest reduces the risk of a serious neck injury by absorbing force during a collision.

Wheel tethers are a lot stronger than they were previously. Wheel tethers substantially reduce the chance of wheels flying off from a car during a collision.

Henry Surtees tragically died when he was hit on the head by a loose flying wheel during a collision in 2009. Driver Jack Clarke’s car spun out and hit a wall, and a wheel and tire hit Henry on the head.

Officials immediately stopped the race, and 18-year-old Henry was taken to the hospital but later died from his injuries. Wheel tethers are now engineered to grip the wheel even during forceful impacts protecting drivers.

When a racing team releases the new F1 car at the beginning of a season, the FIA requires the cars to undergo crash tests. The crash tests ensure an F1 car can withstand high-speed crashes and protect the driver. Teams are not approved to operate a car until it meets all safety requirements during the crash test.

At most F1 races, you will see a crash or two. Some collisions are just a light bump and other crashes are violent and dramatic, resulting in thousands of pieces of carbon fiber body parts shattered all over the track. Thanks to F1 safety standards, we can see drivers walk away from even the most violent crashes.

F1 cars disintegrate in a collision because the parts are designed to shatter to dissipate force away from the driver. The expendable parts of an F1 car are manufactured out of lightweight materials that break into thousands of pieces when encountering an impact.

The shattering and disintegration of car body parts absorb the excess kinetic energy in a collision to help the driver survive.

F1 cars break up easily because the parts that shatter are designed to be only strong enough to deal with the normal force on the F1 car, not to deal with impacts. Formula 1 is the most expensive part of motorsport, but it is also the safest.

Louis Pretoriushttps://onestopracing.com
Previous articleF1 Season Recap 2021
Next articleHow Much Do You Make Winning an F1 Race?