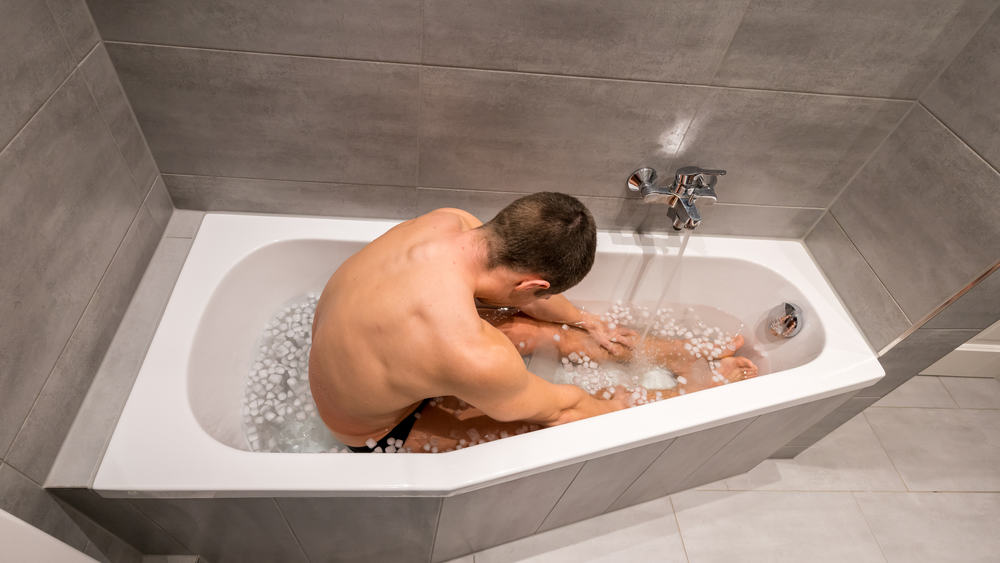 Many athletes take post-workout ice baths because they are believed to aid in muscle recovery, boost metabolism, stimulate the central nervous system, and provide mental clarity. Furthermore, because Formula One drivers can be exposed to extreme heat in their cockpits, this helps them cool off.

One of the key features of ice baths is while they will not improve athletic performance, they can provide athletes with improved recovery and pain relief after exerting large amounts of physical energy. Therefore, before discussing the benefits of ice baths, let’s first explore why Formula One drivers warrant ice baths in the first place.

How Fit Are Formula One Drivers?

While the myth of Formula One drivers as unfit individuals that only require fast cars to be competitive has largely been dispelled, many people still don’t appreciate just how much energy a Formula One driver may exert in a single session.

The primary reasons Formula One drivers need to be physically fit and why they would experience a lot of muscle cramps post-racing sessions are the number of external forces applied on the drivers while operating their vehicles.

Consequently, the rapid deceleration and acceleration needed to smoothly corner Formula One vehicles around a track can result in drivers experiencing six times their body weight in force!

These forces are well above the forces ordinary people will experience in their daily lives. Formula One drivers have to remain in peak physical condition to allow their bodies to sustain these forces without succumbing to extreme fatigue or injury.

However, having strong, lean muscularity is important to withstand these forces. Drivers also need to ensure they have extremely good cardiovascular health and rigorous exercise routines, as drivers’ heart rates have been known to exceed over 170bpm during racing sessions!

Another challenge that Formula One drivers face has excellent power to weight ratios and exceptional cardiovascular fitness levels. Still, they also have to achieve all these milestones without putting on weight, as the increased weight will negatively affect Formula One vehicles’ performance in a race.

The inability for Formula One drivers to have bulky muscles or fat reserves means that the forces applied to their bodies are even more severe than had they been experienced by larger people. Furthermore, athletes with low BMI are more prone to dehydration and heatstroke.

Dehydration/heatstroke is a serious problem for all endurance athletes. However, Formula One drivers are at particular risk. The heat of cockpits, racing environments, insulated racing suits, and hot tarmac often result in Formula One drivers losing multiple pounds through sweat!

In conclusion, there is no doubt that Formula One drivers are elite athletes that put their bodies through extreme hardship. Consequently, any muscle recovery and hydration methods, such as ice baths, are a welcome addition to the paddock!

How Do Ice Baths Help Formula One Drivers With Recovery?

The first and most obvious benefit of ice baths is that they help Formula One drivers to cool down and rehydrate after a race; this is essential, as few sports globally place their athletes at risk of dehydration/heat stroke as Formula One.

The failure to cool oneself down and hydrate after a race can have long-lasting detrimental effects, meaning that the sooner a driver can take an ice bath and replenish their lost fluids, the better.

Less obvious is how exactly ice baths stimulate muscle recovery and overall athletic health. However, research suggests that ice baths reduce inflammation and improve recovery by improving the movement of blood and fluids throughout the body.

Ice baths constrict blood vessels when exposed to ice-cold water and dilate as you exit the cold water. This process helps remove metabolic waste, which is particularly helpful for fluids such as lymph.

Lymph is a bodily fluid that doesn’t have an organ to pump its bodily movement (such as how the heart acts as a pump for blood.)

Ice baths appear to have a net positive effect on the central nervous system, which helps athletes relax and sleep better. This unique combination of mental calmness and improved physical sleep helps recovery, especially for Formula One drivers exposed to extensive travel and stress between races.

Finally, ice baths are believed to trigger a sense of clarity in calmness (in some people!) Therefore, it’s understandable that after a grueling session involving competitors jostling for positions, teams, and athletes, it would encourage the use of ice baths to mentally reset themselves for post-race debriefs and bring down rapid heartbeats.

How Should You Safely Take An Ice Bath?

Due to the risk of hypothermia, Formula One teams need to be cautious when preparing ice baths for their drivers.

To safely prepare for an ice bath, there are some simple rules to follow:

Although there is still a lot of research that needs to be done to conclude that ice baths are an objective method of promoting muscle recovery and combating fatigue.