Why Do F1 Drivers Take Their Steering Wheel? 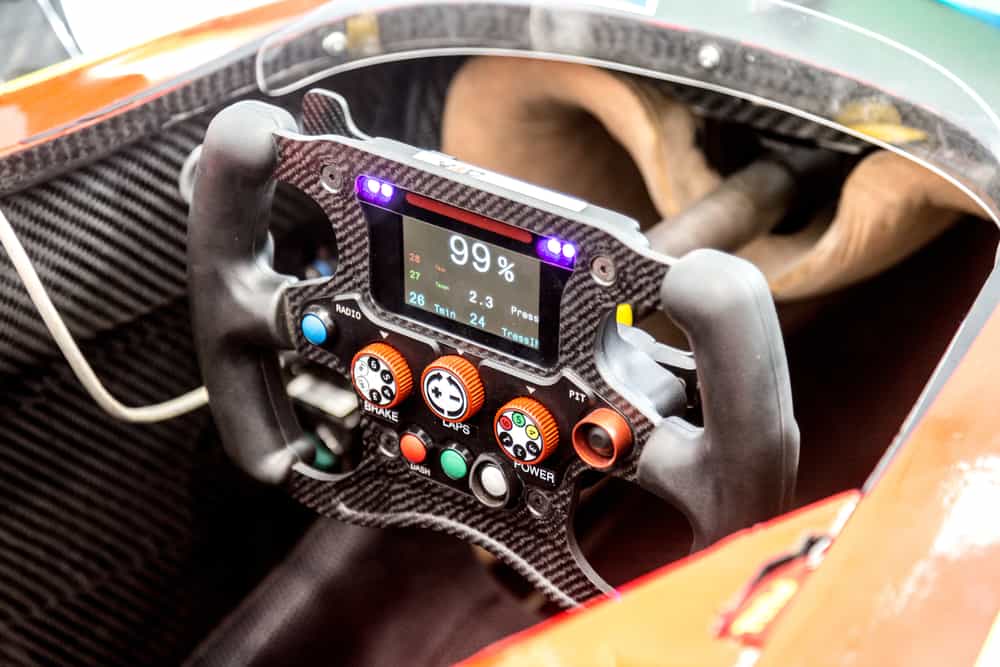 F1 steering wheels can be removed mainly for safety. F1 seats are molded to the driver’s body and are very narrow, so by removing the steering wheel, drivers can get in and out more easily and quickly in the event of an accident, as it does not block the way before.

F1 steering wheels have become truly sophisticated tools that aren’t just for turning. Due to its complexity, many of its functions go unnoticed by most people. Let’s get into the topic!

Why Do F1 Drivers Take Their Steering Wheel?

The main reason is safety. F1 has evolved so much that every detail has been studied to be as safe as possible. Getting in and out of an F1 car is really difficult due to the tightness of the seat. Drivers get out of the car and put the steering wheel on once they are seated, and when they get out, they first take it off and then get out, as it is more comfortable.

In accidents, this function is very useful since it allows the driver to get out more quickly if his car is on fire or in other danger.

Another reason why it is convenient to remove them because F1 steering wheels are very sophisticated and expensive, as they are like a computer that collects information about the data of the car, the circuit, and lap times. In this way, they can be better configured and analyzed.

Can F1 Drivers Change Their Steering Wheel During A Race?

Contrary to what it might seem at first, yes, drivers can change their steering wheel during a race in a pit stop. It is not a very common practice, but it is done when it is believed that there is a problem with the steering wheel, usually related to the steering or the gear changes.

When this happens, the driver informs his engineers of the problem, so they make a pit stop in which the driver removes the steering wheel while a mechanic puts in a new one. Incidentally, they take the opportunity to change the tires.

In the following video, we see a problem that Lewis Hamilton had during the 2012 Indian GP, in which he had a failure with the steering wheel clutch, as he could only downshift with the right hand and not with the left which is how it is done. The coordination for the steering wheel change was perfect:

Why Do F1 Drivers Have To Leave Their Steering Wheel On?

When drivers have a mechanical problem, such as a broken engine, and stay on the side of the track after getting off, they should put the steering wheel in place.

This is because the stewards have to move the car to a safe place, so they can steer the car and push it to a suitable place with the steering wheel. Without a steering wheel, it would be challenging. In situations where the car is badly damaged or has been stuck on the ground, then a tow truck is used.

How Much Does An F1 Steering Wheel Cost?

They have evolved a lot in recent decades and have great technology. The arrangement of the buttons is different for each driver as each one has different preferences, making each steering wheel unique. To make an F1 steering wheel takes more than fifty hours due to its complexity.

As for the price, it is difficult to say as it depends on each particular team and steering wheel, but it is estimated that they cost between $80,000 and $100,000 each, being one of the most expensive parts of an F1 car.

Each driver uses between 3 and 5 steering wheels per season due to developmental changes and accidents, so the steering wheel of a Formula 1 car can cost an average of $240,000 to $500,000 every year.

The Evolution Of F1 Steering Wheels

The following video shows the evolution of F1 steering wheels from the early years. It is fascinating since we can see the changes that have been introduced over the years and the shape changes.

We can see that the first steering wheels were very rudimentary, with the typical round shape, and little by little, they evolved into more sophisticated shapes that looked like spaceships.

In addition, the steering wheels have been gaining functions since they now have multiple buttons for the driver to configure the car, the clutch, the shift paddles, and a digital display to view the information.

F1 steering wheels are designed to offer multiple functions not only to turn but also to allow the driver to change the car’s settings.

Like any other element in an F1 car, it is made so that it allows the driver to go as fast as possible and as safe as possible. Removing it is a great feature that has gotten a lot of pilots out of trouble in accidents.