Why Do F1 Tracks Have Curbs? 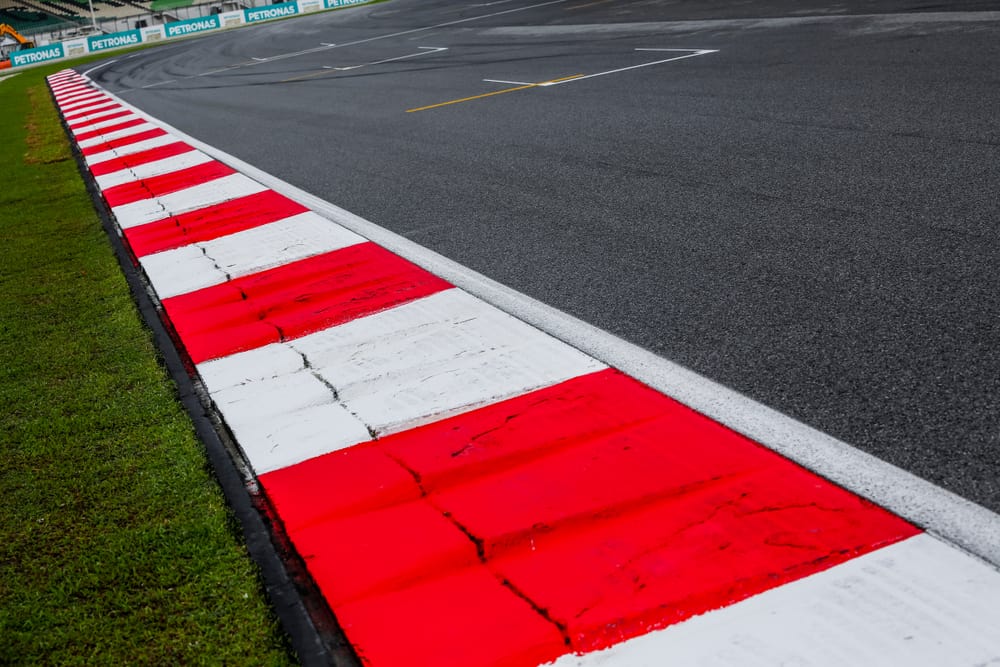 If you have ever seen a Formula 1 race or any racing competition on a circuit, you will have noticed the colored painted borders, usually red and white, on the limits of the track. These are curbs, but why do F1 tracks have curbs?

Curbs in F1 are a safety element that defines the track limits and allows drivers to see the apex of the corners and the outside. If drivers take too much of a curb, it will slow them down, ensuring that they run within the designated limits of the race tracks.

There are many types, shapes, and orientations of curbs, and they are strategically placed in many places with different functions. Read on to find out all about curbs in F1.

Why Do F1 Tracks Have Curbs?

Curbs are a safety precaution that indicates where the designated limits of the racetracks are. Curbs serve to separate the track from the outside grass or gravel, and while they can be taken to take the apex in some corners, going over them too much can slow you down, encouraging drivers to stick to track limits and not win advantage.

When taking curbs, drivers can go over track limits on two tires, but doing so on all four can result in a time penalty. Thus, the marshals ensure that all drivers respect the limits of the track.

In addition, due to their rough nature, the curbs are also useful in the event of an accident since they slow down the speed of the cars, making the impact against the barriers less.

What Are F1 Curbs Made Of?

Curbs are made of metal and are bolted to the asphalt, so they are very easy to change and transport and therefore can be modified from one day to the next. They are very heavy and are covered with a layer of non-slip paint to provide greater grip.

Normally they are painted red and white since they are very striking colors, and therefore they differ more from the asphalt. However, there are circuits in which they are painted with other colors, such as the national flag of the place or another type of combination.

In Monza, for example, they are painted like the Italian flag, and in Spa, they are red and yellow, while in Interlagos, they are green, yellow, and white.

What Types Of Curbs Are There In F1?

Nowadays, the circuits are full of curbs, each with a particular function and strategically placed. In F1, there are five types of curbs:

There are three types: the longitudinal ones, placed at the exit of the corners; the vertices, inside the corners, which are dangerous since they destabilize the car; and the transverse ones, which are the most dangerous and high and are placed in chicanes or corner exits.

Why Have Sausage Curbs Been Criticized?

In recent years there has been a great debate around the famous sausage curbs, as they have become very popular to enhance safety and make drivers respect the track limits, but they have done the opposite.

They have been highly criticized because they have caused numerous accidents. This is because they are so tall and aggressive that they can catapult cars into the air.

That was the case for F3 driver Alex Peroni at Monza in 2019, who went wide at Parabolica, hit a sausage curb, and his car was catapulted into the walls. Surprisingly, Peroni was unharmed in the accident. Here is the video of the crash:

Sophia Floersh also had a crash similar to Peroni’s at Macau in 2018, when her car was also catapulted into the barriers. In addition, sausage curbs can also severely damage the car by taking them. Christian Horner alleged that sausage curbs cost him £250,000 worth of damage at the Red Bull Ring in 2019.

For this reason, many drivers have complained about the danger of the sausage curbs, and several circuits have already removed them or modified them to make them safer. That’s why track walks before a weekend are so important, as curbs can vary from year to year and so drivers can see the changes.

Curbs are an essential element in F1 tracks since they establish a more visible limit between the track and the outside and are a safety element that reduces speed in the event of an accident.

The placement, shape, and orientation of the curbs are highly studied by the FIA to make them as safe as possible. However, as we have seen, modifications and variations are sometimes necessary.

Louis Pretoriushttps://onestopracing.com
Previous article
What Is Ground Effect In F1?
Next article
Is Aston Martin In Formula 1?