Why Do Formula 1 Drivers Juggle? 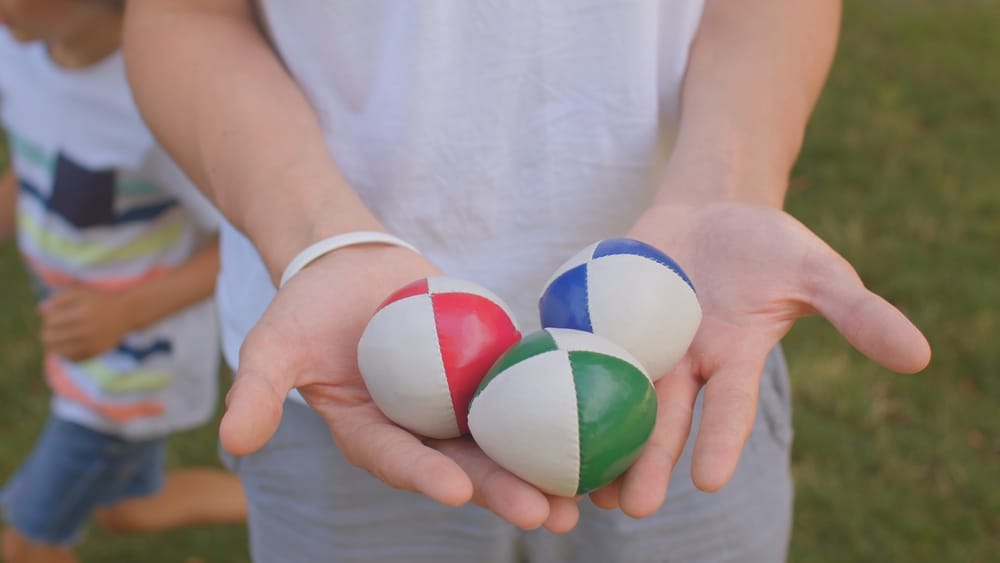 Imagine traveling at 250mph down a straight with the competition inches away at the same speed. As you approach the corner you have to change down a gear, check your electric charge, keep an eye on the car next to you, brake as late as possible, plan your exit, steer, change engine mode, talk to the team, monitor tire and brae temperatures, and accelerate away.

Juggling helps a Formula One driver too.

Formula One is a very intense and demanding sport that requires the best drivers in the world to remain in peak physical condition and their brains operating in the best possible way. Juggling is a unique activity that helps the driver develop and remain at the top.

While he was racing for the Mercedes Silver Arrows team, Nic Rosberg used to spend considerable time juggling. He would often spice it up by exercising his juggling skills while riding a bicycle (Look Ma, no hands!)

Likewise, Pierre Gasly drives for Scuderia AlphaTauri and is a competent juggler.

They chose juggling because it provides the following benefits.

Research has confirmed that learning to juggle builds new pathways in the brain which are used t enhance related to memory, focus, movement, and vision.

Juggling Is Good For Everyone

Learning to juggle has no restriction to the age of the juggler.  The benefits are available to everyone irrespective of sex, age, race, or athletic ability.

Probably the most apparent benefit of juggling for an F1 driver is that it improves hand and eye coordination.

While these are all benefits to the average person in the street, for the Formula One driver thee may be a difference. Not only in winning or losing,  but also to stay in control of an F1 car racing at 250 mph side by side with the competitor next to him.

While it may not impact an already superbly fit Formula One racing driver, the benefit of juggling for most people is that it takes them away from their sedentary daily routine and lets them take part in much-needed physical exercise.

Juggling Can Calm The Brain

By forcing the stressed brain to focus on one relatively difficult exercise, all the stressors have to be temporarily put to the back of the mind and out of consciousness.

While you are learning to juggle it is primarily a left-brain activity which involves carefully focusing and analysing the steps. Once you have learned the skill the right brain takes over.

Being so focused on the skill helps the brain to reset itself and provide create some objectivity to the problem.

Learning a new skill like juggling (which is hard in the beginning) helps you realise your competencies which have a very positive impact on your levels of self-confidence.

By forcing your eyes to focus on the balls I said that juggling has a positive impact on their tracking ability.

Juggling advocates say that this has a positive influence on reading skills.

Not only can you control the difficulty level you want to practice, but there are also so many levels of juggling which can be tried.

As your ability increases so will your confidence and assertiveness.

Juggling Helps You Change Your Mindset

As you learn from your mistakes and increase your ability to juggle you notice how effort and increasing experience bring you ever greater mastery.

This approach has been proven to be a vital formula for success in any activity whether in school, sports, business, or even personal relationships.

Ow you have some of the academic benefits, let’s just say that juggling is amazing fun, and the more you learn, and your skill increases the more addictive it becomes.

So How Do You Juggle

You have read the preceding paragraphs, and now you want to learn the skill of juggling.

Maybe you have tried to juggle before and gave it up because you only have two hands, and you seem to need an Octopus-like body to make it work, and anyway, you are not that good with your hands.

Nothing could be further from the truth, and if you have half an hour and a little bit of persistence, you can learn to juggle three balls.

Do you want to give it a try?

If you do, try to follow the next four simple steps.

Find three balls. The easiest balls to learn with are soft “beanbag” type balls which are no larger than a tennis ball.

Preferably find three balls that don’t bounce very well, because in the beginning you will invariably drop a lot, and you don’t want to have to spend all of your time running after bouncing balls.

Select one of the three balls.

Keep the ball in one hand and hold both your arms out, bent at the elbow and about a 450 angle from your body.

Keep your palms up at about waist level and throw the ball from one hand to the other. It doesn’t matter which hand you start with.

Make sure that the ball travels with an apex slightly higher than your head. Ow, repeat the throw from the other hand back to the first.

Keep repeating this activity until you can easily throw and catch without your arms flailing about as you try to catch miss-thrown balls.

Don’t bang the balls back and forth, instead make sure you actively catch the ball before you throw it back to the other hand.

Concentrate on following the ball with your eye and try to catch the ball without looking at the catching hand.

Now it’s time to increase the number of balls. Going from one to two balls is he hardest step to learn.

Now, with a ball in each hand, repeat the exercise in step two by only throwing ball number one backward and forwards. Remember you still have an unmoving ball number two in your left hand.

When you are able to throw ball number one backward and forwards it is time to start juggling.

Throw ball number one in the practiced ark to your left hand.

As ball number one reaches the apex throw ball number two on a smaller arc to your right hand.

The result should be that:

Don’t let your eye follow one ball all the way to the catching hand, because this will cause you to drop the second one, instead as they pass the apex switch your sight to the ball still in the air.

Select three balls and hold two in your right hand and one in your left hand.

The pattern to achieve is as follows:

You are now juggling, congratulations!!

Formula One Drivers live a very busy life off track keeping their minds and bodies honed for the job ahead.  Juggling helps some of the drivers to develop their hand/eye coordination, plan ahead and stay sharp.

If juggling has such a positive impact on a Formula One driver, imagine how it can help you.

Louis Pretoriushttps://onestopracing.com
Previous article
Role Of The Race Engineer In F1
Next article
Best F1 Liveries Of All Time