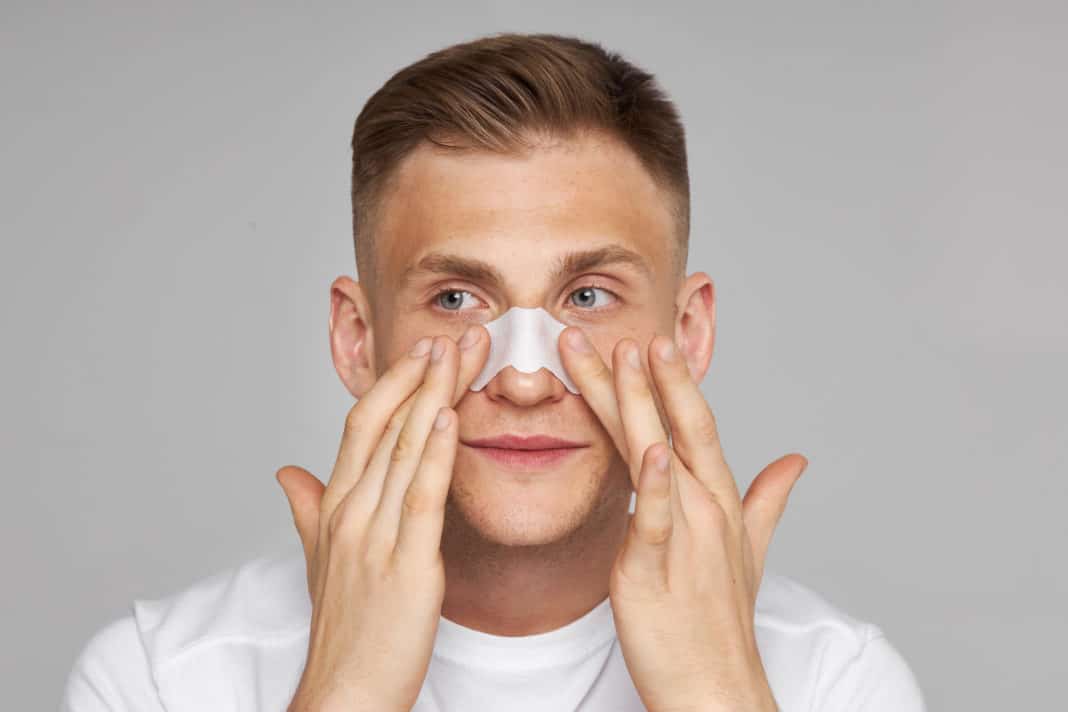 As an avid sports fan, you will undoubtedly have seen athletes with thin strips of what looks like white Elastoplast across the bridge of their noses. The first time I observed this was on Robbie Fowler, the Liverpool striker, in a game against Manchester United in Britain. I put it down to a fad, but they are popping up more and more in many sports, including MotoGP.

MotoGP riders wear nose strips to force the maximum amount of air – and oxygen – into their lungs with each breath. A deviated septum, in particular, can restrict airflow during exertion and the nose strips are there to compensate. Science indicates the strips are ineffective at high exertion levels.

Athletes in the AFL (American Football League) and some other sports have long adopted ‘war paint’ to intimidate the opposition. Still, these nasal strips have different intentions and purposes and would be closer to safety wear than anything else. Certainly, they cannot be seen by opponents during a high-speed motorcycle race and thus have zero intimidation effect.

In the highly stressful racetrack environment on race day, having your head enclosed in a protective shield is, while vital for safety, not an easy place to breathe. These strips help flare your nostrils so that the maximum air intake possible is achieved, which provides more oxygen to the brain and better decisions at life-threatening speeds.

Nasal congestion is commonly caused by allergies, a cold, or a deviated septum (As in the case of Marc Marquez). Sufferers might try common cold treatments or allergy products to relieve nasal congestion. These seldom provide the relief you are looking for, and most cannot be used while racing at high speeds, so many riders prefer a drug-free option.

The septum is the cartilage separating the nostrils. A deviated septum can restrict airflow in the nasal passage, resulting in difficulty breathing through one or both nostrils. The deviation can be a congenital disability or caused by a blow to the nose, and the septum cannot regenerate.

To see the effect of having your nasal passages opened this way, place two of your fingertips on your cheeks on either side of the nose. Gently push inwards and pull away from your nose (see video). This provides temporary stability to the nasal valve.

What does the test demonstrate?

If breathing through the nose is easier during the test, the obstruction is probably located in the nasal valve towards the front of your nose. This confirms that your breathing will be improved by stabilizing the nostrils and preventing the nasal valves from collapsing.

In MotoGP, Pol Espargaro and Marc Marquez have been seen wearing nasal dilators, although Pol’s one is a step forward from the basic strip. He uses a silicone nasal dilator, possibly made by Noson AG in Switzerland, which opens the nasal airways to the maximum using a reusable dilator.

The strips are believed to work well, but MotoGP is intensely physical as the riders throw the bikes around bends for 20-25 laps. At this time, sweat can be a problem with the adhesion of nose strips, even though modern helmets have vents for cooling. Strips are tiny, but being one-use only, adds to the burden on ecology.

The intranasal silicone pads that Espargaro uses help spread the nostrils without touching that delicate nasal septum. This prevents an increased secretion flow common to some dilators, and the pads hold up well in sweaty conditions. One downside might be contact sports, where they can be more easily knocked off.

Such aids are considered essential in many high-intensity professional sports, where a microsecond can be decisive for defeat or victory. That’s why professional bike riders like Danny Petrucci, Pol (and Asprilla’s Aleix) Espargaró, Jorge Martín, and many others make regular use of nose strips in one form or another.

An amateur racer commented, “I have been wearing these for years. You don’t think they are doing anything till you forget to put one on. They help you breathe in a controlled way through your nose, rather than gasp for air through the mouth, making a moto race easier to navigate.

They assist with arm-pump by getting more oxygen through to the lungs. As a result, I don’t get tired when wearing one in the closing minutes of a race, but if I don’t, I’m fatigued much sooner. They are dirt cheap and certainly worth the effort.”

Is The Praise For Nose Strips Universal?

The internet teaches you that opinions on any subject are never unanimous. I found this contrary comment when researching the subject and found a scientific study that backs it up:

“Nasal strips provide little or no effect on the amount of air that reaches your lungs or on the amount of oxygen your body extracts from the air during exercise. Performance and recovery from exertion by healthy adults measured in laboratory conditions also seem unaffected.

A study proving that any form of nasal dilation reduces brain heating during exercise needs to be performed with nose strips. At the same time, the athlete’s performance is closely monitored under various conditions. The strips are silly for many athletes but may work when the increased temperature reduces performance.”

From an American College of Sports Medicine meeting in June 1998:

“A lot of athletes are now wearing these nasal strips, and a high percentage are not placing them where recommended,” comments Frank Cerny, Ph.D. professor and the chair of the UB Department of Physical Therapy, Exercise, and Nutrition Sciences.

“We wanted to see if, when worn correctly, the strips have any effect at a high level of performance. The answer is that they don’t.”

These nasal strips are designed to widen the nostrils. They appear to make breathing through the nose easier during low or moderate activity but are ineffective during high levels of exercise, Cerny said.

The Chicago Tribune wrote that according to studies at Illinois State, nasal strips don’t improve physical performance. The studies measured the performances of 155 people wearing a nasal strip, a fake strip, or nothing. The study required its subjects wear mouthpieces like an AFL football player to imitate similar conditions.

The 49ers’ Jerry Rice believed that nose strips helped him recover faster and ward off fatigue, and eight times Moto World Champion Marc Marquez feels the same. Psychological? Physiological? Regardless of the science involved, If an athlete believes a nose strip improves his performance, it just might.

Motorcyclists in MotoGP move at incredibly high speeds, making it difficult to suck in sufficient quantities of fresh air, despite the helmet blocking much of the wind. Add to this the exertion of throwing the 1000cc bike around corners while dodging traffic, and it’s no surprise that they use every legal assistance and believe that nose strips do help.

Louis Pretoriushttps://onestopracing.com
Previous article
Do MotoGP Riders Have Radios?
Next article
How Dangerous Is MotoGP?