Why Does F1 Race in The Rain? 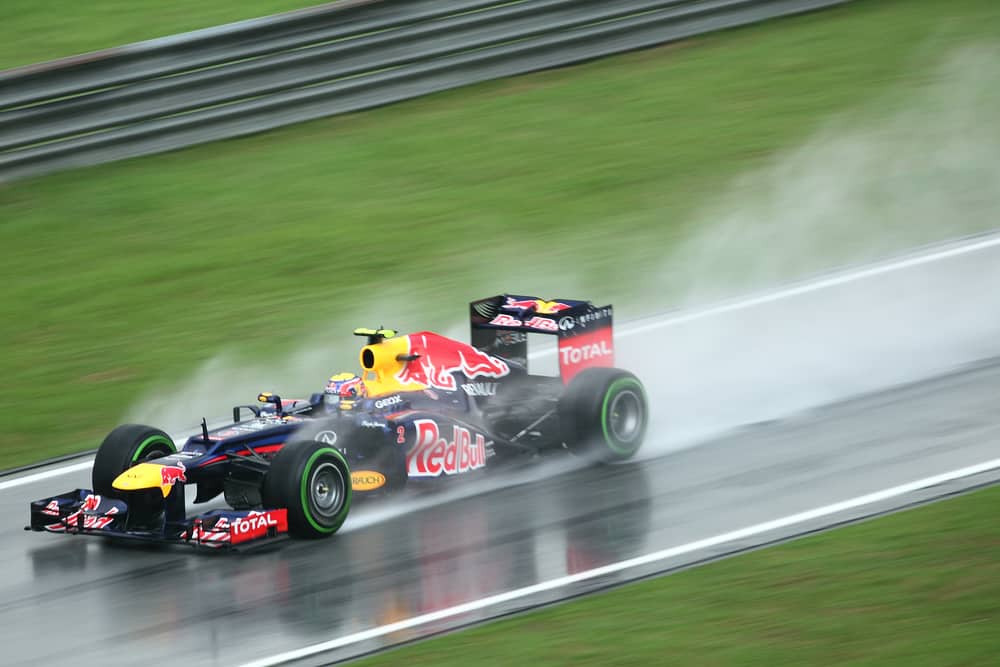 Formula 1 doesn’t seem designed to race in the rain. The drivers get soaked in their open cars as they make their way around the slippery racing track. But, despite all of this, Formula 1 still races in the rain. So, I decided to investigate and find out why F1 races in the rain and what enables races to happen in the rain safely.

Formula 1 races in the rain because tire manufacturer Pirelli produces special wet-weather tires with treads that displace enough water to allow cars to race. Furthermore, the inner workings and aerodynamics of F1 cars are not affected by the rain, so the cars can still drive.

The rain may fall, but the show goes on. Some drivers relish the opportunity and master the rain, while others slip and slide across the track as they struggle to get a hold of their car. But, because Formula 1 has the tools and technology to allow drivers to race in the rain, the racing never stops. This is why Formula 1 races in the rain.

Why Does F1 Race in the Rain?

The short answer is that Formula 1 holds races in the rain because cars can drive in rainy conditions. The cars themselves are essentially water-resistant, so they can survive a downpour, and the wet weather tires (discussed in the next section) enable cars to drive in the rain safely.

It is also very costly for teams to travel all over the world and not complete a race (and therefore lose money) because it is raining. Rain is often a common occurrence in most locations F1 races in, so it is crucial to be able to work with it.

What are Wet Weather Tires in F1?

The full wet tires used in Formula 1 are marked with blue lettering and stripes. They look like the sort of tire you would get on a road car, as unlike the tires used in dry conditions, they are equipped with treads.

The treads allow the tire to displace more water than the intermediate tires (discussed in the next section). According to Pirelli, who manufacture all the tires used for Formula 1, the full wet tires, are able to displace 85 liters of water per tire every second when the car is traveling at 186mph (300kph).

These tires are also designed to prevent aquaplaning, which can be very dangerous. Aquaplaning can also cause drivers to slide off the track and lose positions or end up in the barriers and have to retire from the race.

However, they are slower than the intermediate tires and extremely slow compared to the dry weather slick tires. Therefore, they are only used when it is raining when the race begins, and there are large sections of standing water. If these conditions do not apply, teams would instead opt for intermediate tires, which are quicker.

What are Intermediate Tires in F1?

Intermediate tires in Formula 1 are exactly what their name suggests. They are a compromise between slick tires used in dry conditions and the full wet tire, which is brought out when raining.

As a result, the intermediates can be used on a drying or wet track with no standing water. They are perfect for when a drizzle has just started or when the rain is stopped, and the track is not completely dry yet but doesn’t have puddles.

As races go on, the intermediate tires are often worn down so much that they come to resemble slick tires. The colloquial term for intermediates at this stage of their life is “interslicks.” They are essentially intermediate tires with also the treads worn off, except on the very edge. Lewis Hamilton even won the 2020 Turkish Grand Prix to claim his 7th World Championship on “interslicks” after going 52 laps with them attached to the car.

Is it Ever Too Wet to Hold an F1 Race?

Even though Pirelli has developed tires that enable drivers to race in the rain, sometimes the conditions are too treacherous to hold an F1 race safely. Often the track is deemed too slippery and visibility too low to send F1 cars out onto. The danger when there is a lot of standing water is that cars can aquaplane, as they lose contact with the surface of the track. F1 cars also spray up a lot of water behind them, which makes following, and therefore, racing, challenging, as drivers struggle to see the cars in front of them. These pose significant safety concerns.

This happened very recently at the 2021 Belgian Grand Prix hosted at Spa Francorchamps on 29 August. Unfortunately, when the race was meant to start, the rain was falling heavily, and it was deemed unsafe to race. The race was first delayed by 25 minutes while the stewards waited for the rain to clear.

Despite the conditions not changing, an attempt to start the race was made. However, due to the rain still falling, the race began behind the safety car and in safety car conditions, which meant drivers had to hold their positions and reduce their speed.

After two laps that were classified as formation laps, it was deemed too dangerous to hold the race, and the race was suspended. As the time to complete the race was ticking down, the stewards suspended the race clock (which started during the formation lap) due to the exceptional circumstances.

Eventually, after three hours of delay, another attempt to start the race was made. This time, two laps were also completed behind the safety car. During the third lap, the race was abandoned. A result was declared, as two laps had technically been completed, much to the dismay of some drivers and all the fans who had braved the rain the whole day.

As a result of such a short Grand Prix (the shortest ever race in F1 history), the top 10 were only awarded half points. As the entire race took place under the safety car, the starting grid was the finishing order in the race. This was for everyone, except for Red Bull driver Sergio Perez who spun off the track during the first formation lap and ended up right near the back of the grid for the official race start.

What are the Pit Stop Rules During a Wet Weather F1 Race?

In normal conditions, when there is no rain and Formula 1 teams are using slick tires, there are rules regarding tire usage during the race. In these conditions, drivers must use at least two different compounds during the race (there are three to choose from). These might be hard and soft, hard, and medium, or medium and soft compounds. Therefore, drivers must make at least one pit-stop throughout a Formula 1 race.

However, these rules don’t apply when it is raining before the race starts or when it starts, and drivers start on either intermediate or full wet tires. This means that drivers can run only intermediates or wet tires the whole race without any penalties.

Sometimes, drivers won’t stop at all, as we saw with Esteban Ocon. He completed all 58 laps of the 2021 Turkish Grand Prix on the same set of intermediate tires. His tires were worn right down, though, with a very shallow ‘hole’ appearing on his front right tire. However, he made it to the end and became the first driver since Mika Salo in Monaco in 1997 to run a whole race that was not red-flagged on the same set of tires.

Which F1 Drivers Are Good at Racing in the Rain?

Some Formula 1 drivers thrive in the rain, while others struggle and end up tip-toeing their way around the track during a race in the rain. So, let’s look at some of F1’s greatest names and see what they were like in the rain.

Right now, Lewis Hamilton is the standout name on the grid and the standout driver when it comes to racing in wet weather conditions. The seven-time world champion is a brilliant driver in rainy conditions. He can notch high-speed laps throughout the race, no matter the conditions. He mastered the rain during the 2020 Turkish Grand Prix. Others were spinning off left, right, and center thanks to the newly resurfaced track and the rain making things extremely difficult for drivers.

F1 legend Ayrton Senna was also brilliant in the rain. Like Hamilton, he could expertly keep control of the car while other drivers spun out due to the slippery conditions. He even claimed his first F1 victory in 1985 in the rain during the Portuguese Grand Prix. After that, the Brazilian developed a reputation for mastering the rain, and he certainly lived up to it. He would go on to win 14 of the 21 wet races he started.

Michael Schumacher also had a reputation for delivering the goods when the rain began to fall. He won multiple races in the rain, which undoubtedly helped him break all the records he did. The seven-time world champion was so good in the rain that he became known as the “rain-master,” or “rain-king.”

As you can see, the best F1 drivers of all time could rise to the challenge no matter the conditions. The three drivers mentioned above share a combined 17 Formula 1 World Championships, which amounts to about 24% of all F1 titles ever won. They didn’t care what was thrown at them, they still performed, and as a result, cemented their places in the Formula 1 history books.

Here are some of the best wet weather drives in F1 history (containing some of these drivers mentioned above):

What are the Effects of Rain on An F1 Race?

Now that we’ve seen why F1 can race in the rain, what the rules are like when it comes to these races, and which drivers managed to master the tricky conditions, let’s see precisely how rain changes an F1 race.

The first thing is that it makes the track very slippery. Even the slightest bit of rain before any standing water is created on the track can affect a race. Therefore, if it starts to rain during a race or threatens to rain, it is imperative that drivers immediately pit to remove their slick tires and switch to intermediate or wet weather tires depending on the conditions.

Drivers also need to change the way they brake when approaching corners, as the track becomes slippery when it rains, which means they have less grip. Therefore, they need to brake slightly earlier to ensure they nail the corner. But, if the rain stops during the race, a dry racing line will often appear as the cars continue to displace water. This makes racing easier in this part of the circuit, as the dry track offers more grip.

However, the main issue is not the lack of grip, as drivers reduce their speed slightly in rainy conditions. The wet weather tires help displace water to prevent aquaplaning. It is a fact that visibility is significantly reduced. Modern F1 cars are very wide, so they produce a lot of spray. This is known as a ‘rooster tail,’ as it looks very similar to the fabulous plumage of rooster’s tail.

Formula 1 recently did a short video with several of the drivers on the 2021 grid explaining what it is like to race in the rain:

Thanks to wet weather tires, water-resistant cars, and (mostly) skilled drivers, Formula 1 can race in the rain. While the rules are different and the conditions tricky, some drivers take to it like a duck to water. They master the elements to navigate the slippery track and bring their cars home in one piece.