Why Don’t MotoGP Bikes Have Starters? 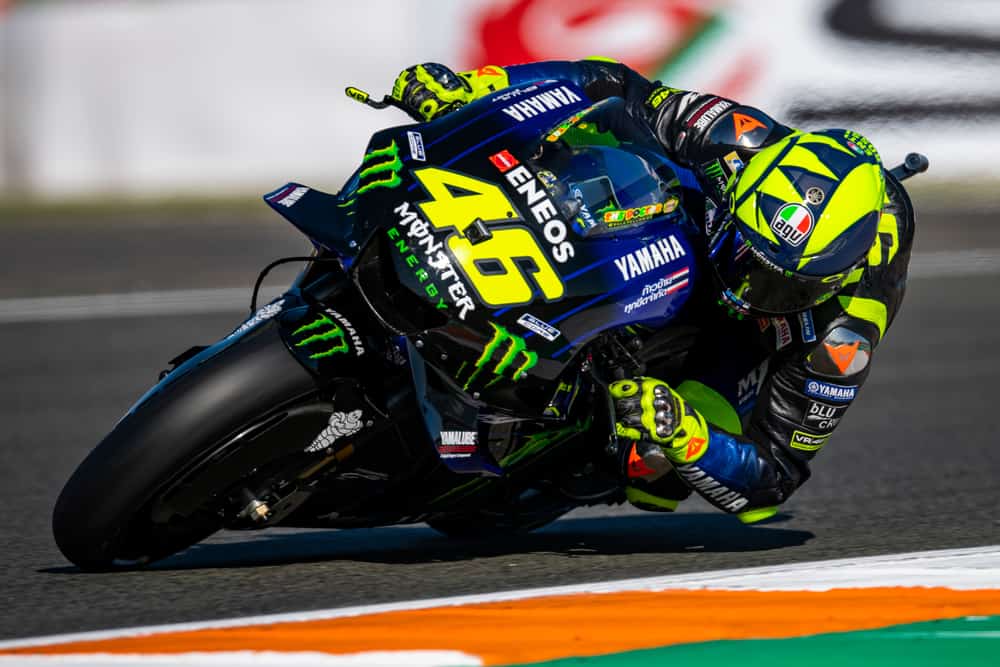 Like Formula One cars, MotoGP applies a minimum weight rule of 346 pounds (157 kilograms) for the bikes. It does not include the driver’s weight and is designed to equalize the racing field by unifying variables that the teams use to create an advantage.

MotoGP bikes do not have starters, batteries, lights (other than a single brake light on the back), Indicators side stand exhaust muffler or brake lights. Removing these from a MotoGP bike saves more than 48 Lbs. (16Kg) and has the effect of causing a 60% improvement n the power to weight ratio.

Weight is the enemy of high-speed racing vehicles, particularly the smaller ones such as MotoGP. For every ten pounds in weight reduction, the power to weight ratio improves by a factor of 0.04, which is an increase of 5.5%.

The Reason Why MotoGP Bikes  Don’t Have Starters

The vehicle’s weight is a carefully managed metric in all modern racing disciplines.

Weight is one of the most important factors when calculating the performance of a racing machine.

Colin Chapman, the energy behind the formation of the Lotus F1 team, is reputed to have said that if a racing team can increase the engine output (hp), a faster speed will be achieved on the straight part of a circuit; however, if a team can find a way to reduce weight the reaching car/bike will go faster on every other part of the track.

Every gram of weight shed from the MotoGP bike represents an increase in the MotoGP’s power-to-weight ratio.

The impact is that in real terms, while only producing 52 hp more  (26%),  the MotoGP bike is effectively 60% more powerful than the equivalent road-going bike.

It is demonstrated with the following comparison

In shedding the weight, MotoGP teams have had to make sacrifices regarding the ease of operation of a modern MotoGP bike.

One of MotoGP’s sacrifices is that they discarded the bike starter motor, which weighs approximately 2.78 Lbs. (1.260 Kg)

How Does Weight Affect The MotoGP Bike?

As seen from the above statistics, the weight of a MotoGP bike strongly influences the rider’s ability to achieve competitive lap times. It affects the following performance parameter.

Gas consumption is a very important metric because the lower the bike’s weight, the better the fuel consumption.

The knock-on effect is that as fuel consumption improves, less gas needs to be carried by the MotoGP bike, which adds another weight saving to the mix.

Whether for a road bike or a MotoGP bike, the machine’s weight is a significant factor that the manufacturers concentrate on.

It is well illustrated in the following weight reduction of the Yamaha YZF-R1 & R1M from the 2009 to 2022 model years.

With MotoGP, the need to control a bike’s weight is even more important as the impact of weight on the bike’s performance is measured in grams rather than kilograms.

In addition to these weight savings, a MotoGP chassis is built using very strong, lightweight materials, and so the net effect is that the average weight of a MotoGP bike is in the region of 346 Lbs. (157 kilograms).

It is just part of why a MotoGP bike is, on average, 90 Lbs. (40Kg) lighter than a mass-produced conventional  Yamaha YZF-R1 & R1M.

Differences Between A Road Bike And MotoGP Bike

How Does A MotoGP Bike Operate Without A Starter?

The MotoGP teams have two methods to start the bike.

This method is called a Paddock starter and involves

The rider pushes the bike down the track, and when it is going fast enough, he jumps on board, selects gear, and it will hopefully start.

Sometimes the rider will stand on the foot pedals, and when he selects the gear, he pushes down to create as much weight as possible on the back wheel to ensure that it turns and starts the engine.

The reason why a MotoGP bike does not have a separate starter motor is to save weight. Weight shedding is a  critical activity of the engineering team because it improves the power-to-weight ratio and, therefore, the bike’s performance.

Louis Pretoriushttps://onestopracing.com
Previous articleHow Much Does It Cost To Run A MotoGP Team?
Next articleWho Gets Paid More: Formula 1 Or MotoGP?