Why Is Ducati So Fast In MotoGP? 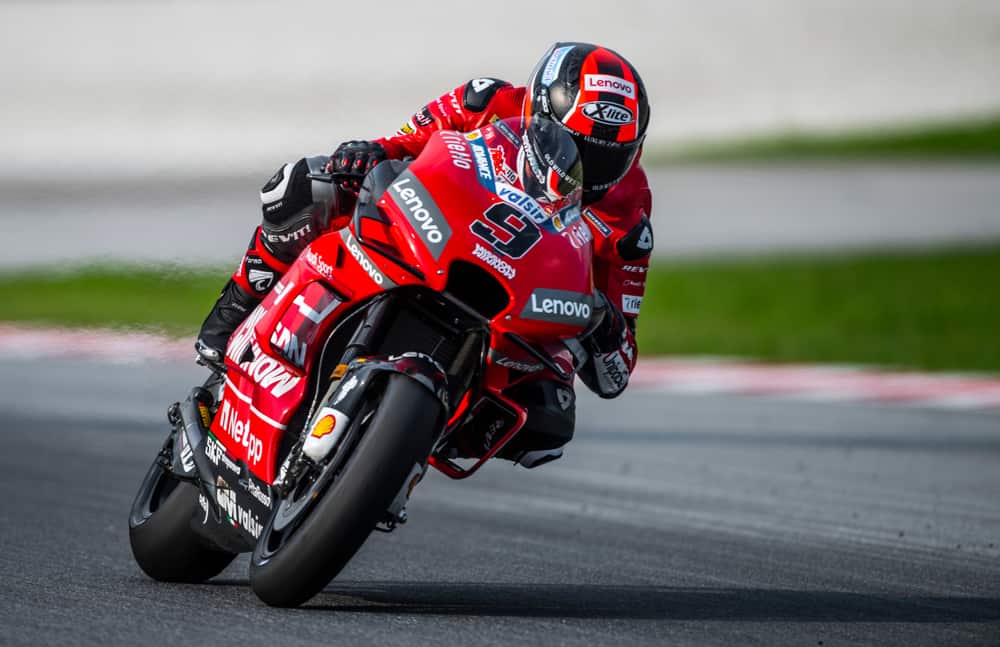 Ducati is the MotoGP Constructor’s Title winner for 2020 and 2021, and they have proven their ability to reach mind-blowing velocities. MotoGP speeds rise yearly, and in 2022 the Ducati racer Jorge Martín has broken the top speed record at a whopping 225.93 mph. Ducati is a force to be reckoned with in terms of speed, but why are they so fast in MotoGP?

V-Four and Inline engines are MotoGP’s main two engine configurations, and Ducati uses a V-Four, which has proven to be the best for speed. V-Four engines are narrower, which creates better aerodynamics. V-Fours also lessen power loss through engine pumping and yield more horsepower.

Ducati meets the need for speed through intricate and genius design. A Ducati’s V-Four engine is finetuned and fascinating. We’d love to tell you more details about how it makes Ducati so fast, how MotoGP bikes become fast, and other fascinating facts about Ducati and their career in the MotoGP.

How Ducati Is So Fast In MotoGP?

V-four engines topped Inline engines in the last 50 MotoGP championships by winning 88% of the races, also reaching 94% of the highest recorded speeds. The design of a Ducati’s engine is slick and produces insane horsepower, and what makes Ducati the coveted brand they are today.

Pumping losses refer to the energy lost in pumping air from the engine’s intake to its exhaust, and a Ducati engine minimizes this through better-designed airflow. The less energy that is lost, the more that can go into creating a high velocity.

Ducati also configures their engines at 90 degrees which is an added benefit for speed since this angle would allow for better balance, eliminating the need for secondary balancing mechanisms that would add extra weight and slow down the vehicle.

Ducati only uses desmodromic valves in their engines instead of pneumatic valves. Desmodromic valves keep consistent air pressure when running the engine and avoid the problem of a valve float as compressed air is used instead of springs, which increases engine power, effectiveness, and performance.

The track used to race has a high impact on how fast a racer can go. The two variable factors of the track shape influencing speed would be straight lines and corners, whereas Ducati’s strong suit is straight-line. MotoGP tracks containing long straight lines allow Ducati to showcase sizeable speed achievement over those with more corners.

How MotoGP Bikes Are Made Fast

MotoGP rules state that the bikes must have a four-cylinder engine with a cubic capacity of 1000cc, and the total bike weight may be a maximum of 348.33lbs. Engineers work with these rules to create high-speed MotoGP machines!

All MotoGP bikes are custom, hand-made, and are considered prototypes. MotoGP bikes accelerate from an angle, have aerodynamic soundness, produce efficient energy distribution on the circuit without undesired wheelspin, produce corner speed, balance throughout braking conditions, and program traction. All the mentioned factors equate to a hyper-fast, highly specialized MotoGP bike.

As you can tell, the design and technology behind MotoGP is a massive feat, therefore taking tons of communication through a large team of experts to perfect a bike through copious amounts of data review from previous races. All race analysis contributes to mastering speed, among the other intricacies that need perfection to gear towards winning a race. MotoGP is far more than what you see on screen!

Speed is also not all about the bike itself. Racers are professionals for a reason! Each racer is highly skilled, and not just anyone can race a MotoGP bike. On a MotoGP bike, the racer’s body posture is crucial because if they don’t keep the right pose, it could create turbulence, resulting in an aerodynamic slowdown which prevents the bike from reaching its full speed potential.

Fast Facts About Ducati In MotoGP

Ducati was founded in 1926 and started as a modest family-run radio manufacturer. Who knew they’d end up making the MotoGP bikes we see today? They joined the MotoGP scene in 2003 and have never looked backward, and they made sure to claim their place in the world of MotoGP.

Only in 1950 did Ducati produce their first motorcycle and named it Cucciolo. It was more of a motorized bicycle than an actual motorcycle with a 48cc engine that could reach 40mph. A present-day moped is around 50cc, so Ducati had humble beginnings for a brand that would one day create machines that travel over 220mph in the renowned MotoGP!

When Ducati joined in 2003, they came third place in the Japanese GP, won nine podiums, and had two bikes in the final top six! Their first MotoGP bike was faithful to the signature desmodromic system seen in Ducati’s engineering. Although Ducati did not invent desmodromic valves, they are used exclusively in their commercial production and have become a brand symbol.

The Ducati Desmosedici GP7 is a legacy bike in Ducati’s MotoGP history. In the 2007 Grand Prix, the GP7 displayed eleven winning victories and claimed Ducati’s first dual Rider and Manufacturer title. They have yet to win both titles in the same year again, but the GP7 is one of Ducati’s most successful bikes in their history.

The first MotoGP Championship World Title win for Ducati was in 2007 by racer Casey Stoner. Ducati earned ten victories and won four podiums that year, and they claimed success by racing the Ducati Desmosedici GP7.

It had been a while since their last World Title, but Ducati came out with a blazing win in 2021. Five of Ducati’s riders claimed twenty-four podiums with a whopping seven victories! They won the World Title by producing 433 points. Ducati also finished in at least one position of the top four for 17 out of the 18 races in 2021.

Ducati’s V-Four, 90-degree engine with minimal pumping losses and straight-line advantage is a surefire way to win many more titles in MotoGP thanks to their ingenious engineering. Besides the track itself, many factors influence the speed of a MotoGP bike, but it takes an excellent team and phenomenal racer to reach those top speeds!

Ducati is rich in history, making its way from humble beginnings in 1950 and 48cc bike leading to its MotoGP debut in 2003, winning the MotoGP World Title in 2007 and 2021. The many victories and podiums under Ducati’s belt are impressive and make Ducati a top contender in the MotoGP.

Louis Pretoriushttps://onestopracing.com
Previous articleWhat Engines Does MotoGP Use?
Next articleDo MotoGP Bikes Have A Battery?