Why Is Formula 1 Still So Important For Tobacco Companies? 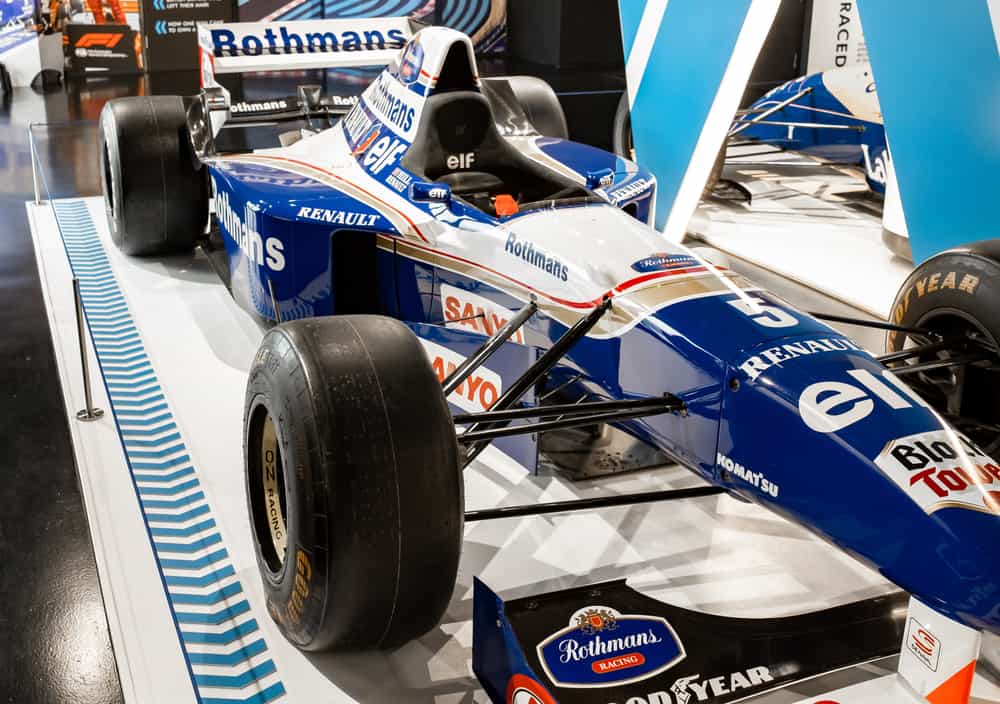 Since 2006, tobacco advertising has been prohibited in Formula 1. However, even today, the big tobacco companies continue to invest large amounts of money in the competition, but why is F1 still so important for tobacco companies?

Traditionally, Formula 1 has been an ideal sport for tobacco for its glamor, speed, technology, emotion, and global vision. F1 is a sport with millions of fans worldwide and with large companies behind it, and tobacco companies continue to invest money to attract the younger audience.

This is the reality, as dark as it may seem, and although it appears that the tobacco companies abandoned the sport many years ago, they never did, and they are still very present today, as we will see in this article.

Is Tobacco Advertising Legal In F1?

Its prohibition was not without controversy since it is a business that involves a lot of money. In the late 1990s and early 2000s, there was already talk of banning tobacco advertising in F1.

In some countries, tobacco advertising began to be outlawed, so the teams that had tobacco companies as sponsors (almost all) had to change the decoration of their cars for certain races so that this advertising did not appear or did so subliminally.

In 2001, the WHO ruled to ban it, and the FIA imposed a veto on it, which it annulled, and later the WHO ordered its definitive ban. Although as we will see later, tobacco companies do everything possible to remain very present in Formula 1.

Why Is F1 Still So Important For Tobacco Companies?

Apparently, since 2006 there has been no tobacco advertising in Formula 1, although, in reality, they continue to promote their products subliminally in big teams like Ferrari or McLaren.

To give you an idea of how present they are even today, tobacco represented almost a tenth of all F1 team sponsorships in 2019, an estimated $95 million out of a billion-dollar annual budget, and keep in mind that in theory, tobacco advertising is prohibited!

Tobacco giants like Philip Morris (PMI) and British American Tobacco (BAT) continue to pour vast amounts of money into Formula 1, but why?

The big tobacco companies are still interested in Formula 1 as they have always been linked to it, and it is a sport with more than 400 million viewers worldwide.

Studies estimate that more than 45% of F1 fans are under 35 years old, so the big tobacco companies remain in Formula 1 to attract young people and the new generations through sophisticated tricks and marketing to avoid legal obstacles.

Starting in the 1960s, Formula One began allowing sponsorships to increase revenue and technical support for the teams. Soon, many big brands became interested in the sport due to its exposure and potential.

The cars left behind the classic racing colors and national flags and began to carry bright colors and many logos that promoted various products. Tobacco advertising was one of the very first sponsorship brands ever in F1.

The first corporate F1 sponsor was Gold Leaf cigarettes in 1968, which sponsored Team Lotus, put the logos on their cars, and painted them in the company’s signature colors: red, white, and gold.

In the mid-1980s, Barrie Gill, a well-known paddock journalist and then CEO of Championship Sports Specialists Ltd., a sports sponsorship company, explained why tobacco was so interested and present in Formula 1:

“It’s the ideal sport for sponsorship. It’s got glamor and worldwide television coverage. […] It’s got total global exposure, global hospitality, total media coverage, and 600 million people watching it on TV every fortnight … It’s macho, exciting, color, international, and glamor… They’re there to get visibility. They’re there to sell cigarettes.”

It seemed like F1 was made to sell tobacco. Tobacco is associated with successful businessmen, team managers, and classic drivers. One of the great exponents of a life of excess was James Hunt, usually with a cigarette in his hand and several women around him before or after a race.

Suppose you think about classic and iconic cars. In that case, you will realize that most of them are sponsored by tobacco companies: Team Lotus with John Player Special and Camel in the 80s, McLaren with Marlboro in the late 80s and early 90s, Williams with Camel and Rothmans in the 90s, Ferrari with Marlboro in the 90s and 00s…

By the 1990s, tobacco and F1 had become inseparable companions. In 1995, of the top ten ranked constructors, nine raced with cigarette brand logos on their cars.

Tobacco companies invested vast amounts of money in the F1 teams, and in return, they obtained unbeatable visibility, so they were very beneficial alliances for both. It is estimated that by 1999, tobacco companies were spending around $82.9 million per year on F1, a record figure.

Why F1 Gave Up Smoking And How It Worsened Its Health

Despite the incredible market behind it and the success of tobacco companies in Formula 1, the sport had to quit, which had significant consequences for F1.

We could talk about whether it is ethical or not to promote tobacco in F1. Still, two things are undeniable: it gave us very iconic and unique designs (this reason is superficial, but it had to be mentioned), and most important, it was a massive injection of money in F1.

However, in the late 1990s and early 2000s, European countries began to introduce tobacco and alcohol advertising regulations in sports, so the tobacco companies had to remove their logos from the cars at the European Grands Prix.

There was controversy about its ban for some years until finally, due to pressure from the World Health Organization and European countries, the FIA banned tobacco advertising for the end of the 2006 season.

The biggest problem with tobacco companies leaving was that they brought in a lot of money, bringing in the most significant revenue for the teams. When they left, that void was never filled.

F1 is ridiculously expensive, and money is essential to its existence. Tobacco companies invested so much money in the teams that they could sign any driver they wanted, that is, the fastest they could find, regardless of the price of their salary.

This has caused F1 to start looking for drivers who pay to race, that is, the highest bidders, instead of the fastest drivers, making many F1 drivers mediocre while other talented ones are left out of the category. And that has undoubtedly been the biggest consequence of the departure of the tobacco companies.

How Do Tobacco Companies Keep Hiding Their Logos In F1?

As we mentioned before, from the 90s, tobacco advertising in F1 began to be regulated. Different countries progressively began to ban it, and teams with tobacco advertising had to change the decorations of their cars for those races, disguising it or through subliminal messages so that they would still make an appearance.

Here are some examples:

In 1997, they replaced the Rothmans logos with question marks, satirizing the situation.

Sometimes they simply removed the Marlboro letters, leaving the easily recognizable outline of their design. Later, they hid it with sorts of barcodes or left their space blank, associated with the tobacco company.

On other occasions, they simply removed them or wrote the name of their drivers, copying McLaren. In 2005 they even added curious and fun shapes on the sides of the cars.

Philip Morris has always been closely linked to Ferrari. Even some Ferrari team managers and presidents such as Sergio Marchionne, Luca di Montezemolo or Maurizio Arrivabene have also been presidents of Philip Morris or have worked for the company.

As for the hidden logos on the cars, until 2010, they used the barcodes as a cover for Marlboro, but the FIA forced them to remove them. And from 2011 to 2017, the Scuderia logo was a kind of red and white rectangle reminiscent of a pack of Marlboro cigarettes.

As of 2018, with the departure of Santander as the main sponsor, a new sponsor appeared at the Scuderia, Mission Winnow, which advocated a “healthier” future for smokers in the world.

This brand does not actually exist and does not sell anything; it is a shell company that Philip Morris is behind. Its logo is reminiscent of the Marlboro M, and in many races, they have had to remove it because some countries did not allow it. Finally, the Italian team has preferred eliminating it by 2022 to avoid major problems.

British American Tobacco (BAT) which sponsored British American Racing (BAR) (what a coincidence…), returned to F1 in 2019 with McLaren through A Better Tomorrow (ABT instead of BAT), a shell brand just like Mission Winnow.

In March 2019, after being investigated by the European Commission and withdrawn, BAT returned with VYPE, an electronic cigarette company, as this type of advertising is legal in F1.

And as if that were not enough, in 2020, BAT created a new brand called VELO, in which they announced a virtual competition through the F1 game, in which the prize was to go to Silverstone and compete with the McLaren drivers in a simulator. The trick of this promotion is that to participate, you had to be over 25 years old, and you had to indicate if you consumed nicotine or BAT products, so it was aimed at a specific audience: smokers.

For the 2020 Abu Dhabi GP, they also created another ghost brand called VUSE. The most convoluted thing happened during the 2021 Russian GP, in which the OXXO logo, a Mexican self-service store, appeared on the McLarens. OXXO never paid for advertising; instead, BAT paid since that is where most people in Mexico buy cigarettes.

F1 and tobacco have always been closely related, as it has been a very beneficial and lucrative association for both.

However, since the ban on tobacco advertising in F1, big tobacco companies have done everything they can to stay in the sport, albeit subliminally and through obscure means.

Louis Pretoriushttps://onestopracing.com
Previous article
Why Are There No Female Drivers In F1?
Next article
The Best One-Off Formula 1 Liveries Ever