Why Is Formula E So Slow? 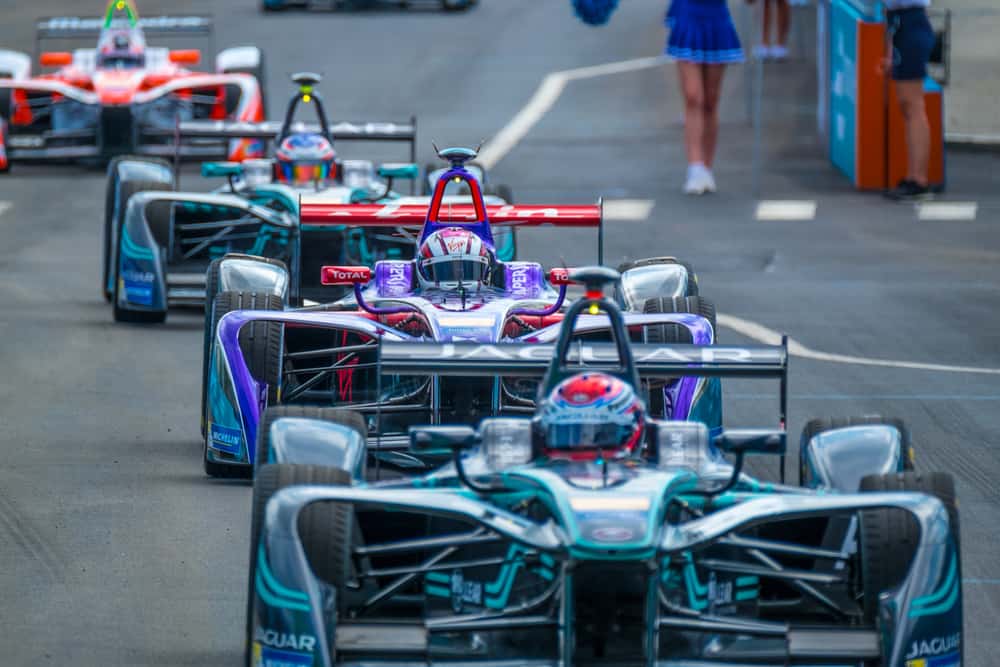 The main reason why Formula E cars are so slow is the engines. Formula E cars have an artificially placed cap on around 335 horsepower, compared to the 1000 horsepower that an F1 car has. Electric engines are simply not as powerful or efficient as petrol engines, as they are still new and developing.

To see exactly why Formula E cars are so slow, you need to look into the car’s design in much more detail.

Why is Formula E so slow?

Formula E was started as the electric alternative to Formula 1, with all cars running electric engines. These engines have a cap on the kilowatts of the engine at 250, which produces around 335 horsepower. This decreases to around 270 brake horsepower during a race, as the Formula E cars have decreased power for races.

Formula E engines are also a lot less developed than Formula 1 engines. Formula E only began in 2014, so designers have only developed electric engines for the championship for seven years. It means that these engines are still in early development. These cars will continue to get faster.

Are Formula E cars designed to be slower than Formula 1 cars?

To differentiate itself from Formula 1, Formula E has focused on city street racing; something F1 only has on a few different tracks like Monaco and Singapore. This means that Formula E cars are designed much differently from Formula 1 cars.

Formula E cars are built for close combat, wheel-to-wheel racing, with the championship seeing more overtakes than Formula 1. So it means that Formula E cars are not designed to be as straight-line fast as Formula One.

Looking at the upcoming calendar for the 2022 season, there are already 11 street circuits in the calendar, with only 1 race not being in a street circuit. The low maximum top speeds mean that the racing is a lot closer, which is exactly what Formula E is looking for.

The whole point of the championship was to create exciting wheel-to-wheel racing in street circuits that Formula 1 couldn’t. This is why they have artificially placed caps on speed, to make the racing much closer and therefore much more exciting.

There would not be much point in Formula E cars being designed to have incredibly high top speeds when it is rare that the cars reach these speeds in a race.

Formula E engines are incredibly light because they require fewer parts to produce energy through an electric motor than a combustion engine. This, along with the lightweight designs of the car, makes Formula E cars incredibly fast off the line. It is one area of the cars that you can say is certainly not slow.

The car’s acceleration is comparable to Formula 1 and Moto GP, two of the fastest racing championships in the world.

Will Formula E cars get faster

Formula E cars are continuing to be developed at a high level. The competition has only been going on for seven years, so the year-to-year development of the car is much faster than Formula 1. But the cars will likely continue to be designed to be not nearly as fast as Formula 1 cars and will continue to be looked at as slow. But they still have a lot of development to go.

This means that Formula E cars will continue to get faster. However, they may not ever reach the same top speeds that Formula 1 cars do. Not because of lesser designs, but simply because the championship is not designed to be raced at full speed.

Street circuits are a massive part of Formula E and are the other unique selling point to the championship, other than the electric engines. It seems unlikely that Formula E will move away from street circuits, so designers will continue to make the cars favor street circuits.

Compared to Formula 1 or even Formula 2, Formula E is a much slower series. But Formula E is designed that way, and it is meant to produce wheel-to-wheel racing on street circuits. The series will continue to develop as it is still very new, so with vast investment, Formula E will continue to get quicker, even if it is slow now.

Louis Pretoriushttps://onestopracing.com
Previous article
Worst F1 Tracks For Overtaking
Next article
How Many Pit Stops Are There In F1?

If you love the world of motorsport like myself,...
Read more

IndyCar Vs. NASCAR: Which One Is More Popular?

NASCAR and IndyCar are two of the most popular...
Read more

Why Do Car Batteries Need Water?