Why Is There No Overtaking In F1? 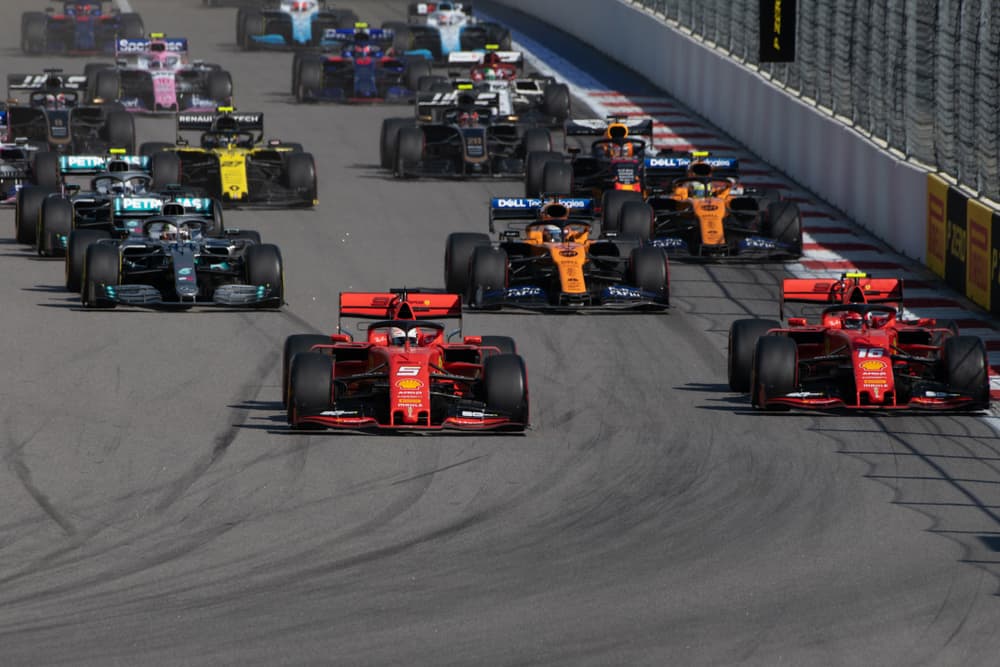 There is a common perception among F1 fans about the lack of overtaking in the sport, claiming that some races are simply awful to watch due to the lack of action on the track, but why is there no overtaking in F1?

The main reason for the lack of overtaking is the cars’ advanced aerodynamics. When following a car, the dirty air that the leader releases have been displaced and manipulated so that the car behind cannot make good use of its slipstream and therefore cannot approach the car in front.

In this article, we will see how serious the issue of overtaking is in F1, what solutions there are, and much more, so keep reading!

Why There Is No Overtaking In F1

In the early days of F1, cars were very simple, allowing them to take advantage of the car’s slipstream in front to get closer. The car behind was “sucked” along by the car ahead so it could overtake him.

However, from the late 60s and 70s, engineers began looking for ways to make cars faster, thanks to scientific and technological advances. One of the key fields was aerodynamics, through wings that used the airflow to create a force to push the cars down, making the cars stick more to the ground. This is what we know as downforce.

Aerodynamics soon became a key element in F1. The teams added elements and details to their cars, like sidepods, to take advantage of the different airflows more efficiently, and direct them to where they wanted. The thing went so far that the FIA even had to intervene by prohibiting and limiting what could be done for the sport’s good.

Engineers only focused on using airflows efficiently but without paying attention to what happened to the car behind. The problem was the airflow their cars created, known as dirty air, which meant that once a car reached the wake of another, it could lose up to 40% of downforce, making it very difficult to follow closely and therefore overtake.

However, the most effective invention is the DRS, which has significantly increased overtaking.

How DRS Has Increased Overtaking

The FIA introduced the DRS system in the 2011 season to create more spectacle and overtaking. But first of all, what exactly is DRS?

DRS, the Drag Reduction System, is a mechanism installed within the motorcar that allows the driver to move a flap situated within the rear wing of the racing car to a horizontal position at the push of a button. This allows unimpeded airflow through the rear wing and thus reduces excess drag.

DRS is used on specific straights when one car is less than a second behind another, so by activating it, the car can take better advantage of the slipstream, and therefore, it favors overtaking. If you want to know more about DRS, visit this article where we explain everything about it.

The point is that, since its introduction in 2011, the number of overtaking by season nearly doubled and was nearly four times that of seasons during the late 90s and early 00s. Part of this is thanks to the high degradation of tires that Pirelli has been asked to favor pit stops and overtaking, but we can’t deny the fact that DRS has exponentially increased the number of overtaking.

The DRS has been a necessary element for overtaking in F1, at least, with current cars, although there has always been a debate about its use.

Its biggest detractors describe it as “artificial” and “not real racing.” The truth is that most overtaking with DRS is not very spectacular as it usually occurs in the middle of a straight, although sometimes they do bring the cars closer so that they can fight in the corners, so in this sense, it is a double-edged sword.

Overtaking in F1 Over The Years

Before going into details, we must highlight that F1 overtaking data sources are very varied, and many do not match, as it is often not entirely clear what counts as overtaking. For example, does it count overtaking a car that has damage and is very slow? Furthermore, the further we go back in time, the less data there is and the more inaccurate it is.

That is why we must remember that the data used is approximate and not 100% secure.

The next graph shows the average overtaking per race in F1 from 1990 to 2020 from two different sources, a Reddit user (1994-2020) and an Autosport article (1990-2016). Although they differ a little, the general trend is the same, so we can understand the evolution of overtaking over the years.

We can see how, since 2011, overtaking has skyrocketed due to the introduction of the DRS. It is also interesting that, in the seasons in which regulations were introduced, such as 1994, 2009, 2014, and 2017, overtaking usually drops during that first year.

We can also highlight that the considered “golden years” of F1, the 80s (although they are not here), the 90s, and the 00s did not provide as much spectacle as people claim, so we can affirm that “all past times were always better” is not exactly true in F1. Rather, people nostalgia the past times and believe that the current times are worse when it is not true.

Here are some curious records on overtaking in F1 provided by the Motor Maximum webpage:

Why Bigger F1 Cars Are Faster But Worse

The 2017-2021 cars are the biggest, widest, longest, and heaviest cars in F1 history. The 2017 regulation change sought to create faster cars that were harder to drive to bring more spectacle and fresh air to the sport through more aero and wider tires.

Over the years, they have become wider and heavier because the rules pushed them: hybrid systems that require more space, additional safety, and removal of in-race refueling that requires larger tanks. The bigger and heavier a car is, the more downforce and grip it has. Therefore it is more stable and faster. That is why current F1 cars are the fastest in history and beat so many lap times records.

The problem is that, as these cars rely more on downforce and are more stable, overtaking becomes more tricky. The aerodynamics are so complex and the wings so large that the slipstream is very inefficient. Furthermore, the size of the cars makes overtaking more difficult, especially on urban circuits like Monaco, where it is very difficult for two cars to be in parallel.

“We all know what the real problem is. These cars are impossible to overtake with, at least on most of the tracks where we race”.

The following video shows some of the best overtaking of the 2010-2019 decade. We can highlight that all of them have been without the help of the DRS, except for Sainz on Pérez in Brazil, in which the DRS allowed Sainz to get close enough to Pérez on the straight to be able to overtake him in the corner. That is the main advantage of the DRS to offer spectacle and not simply more overtaking.

How The FIA Plans To Increase Overtaking In 2022

2022 will be a revolutionary year for F1. There will be a big change in the regulation of aerodynamics in which cars will be much simpler and smaller. If you have been attentive during the article, you will have deduced that, indeed, this favors overtaking.

And it is that the changes for next season are specifically designed to offer more overtaking and greater spectacle on the track, although it will be between 3 and 5 seconds per lap slower. Here are some of the changes:

Lack of overtaking is a problem, not only in F1, but in other motorsports, and it is the main issue that fans emphasize, and with good reason, as who wants to see an hour and a half procession? After all, racing is a show, and overtaking is one of the key parts.

However, suppose we remove that golden filter to the past and objectively analyze the data. In that case, we can see that it is not a new problem and that F1, aware of it, is always looking for new ways to improve racing through regulatory changes and implementation of new systems such as DRS which have had a notable influence on the increase in overtaking.

The future looks promising, and I do not doubt that F1 will constantly try to make the necessary changes to increase overtaking and improve racing so that at the end of the day, we can say that they have created the best show in the world.