Can I Drag Race With A Cracked Windshield? 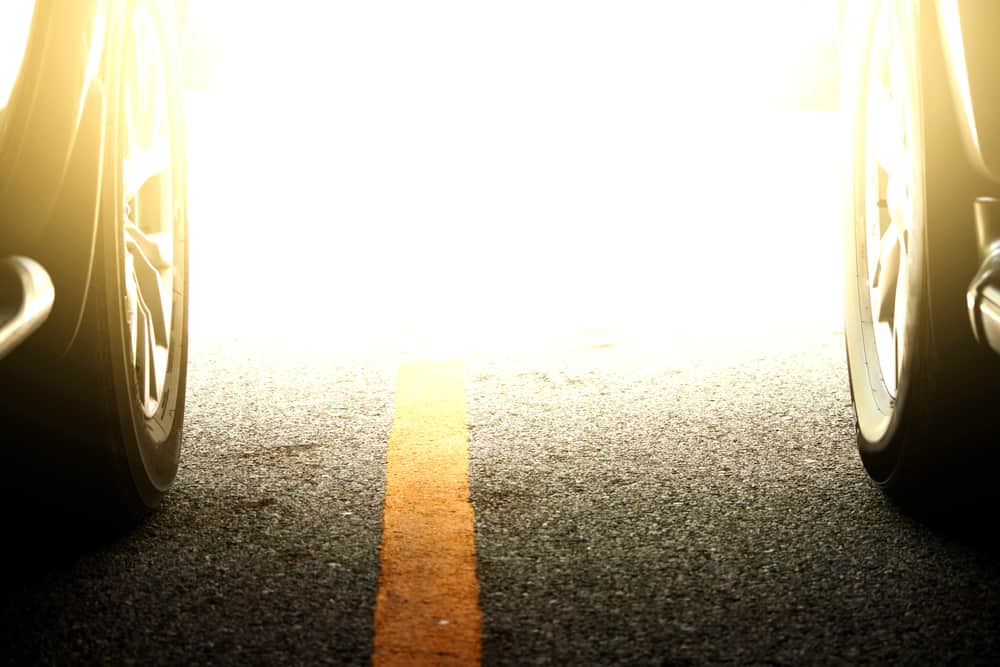 A purpose-built drag racing car undergoes in-depth research and development to be competitive and safe for the driver. This would entail that the vehicle’s manufacture follows the highest quality standards without any physical flaws.

Theoretically, one could drag race a car with a cracked windshield, assuming that the crack is not significant and does not hamper vision and maintains structural integrity.  However, the vehicle will not pass the scrutineering process at a sanctioned drag race event.

Drag racing is an intense battle of two vehicles racing from a standing start to a finish line. The vehicles drive at maximum acceleration on a pre-determined length of road in the shortest amount of time. The winner emerges by beating the rival to the finish line.

What is a drag racing car?

Drag racing cars fall into several categories. A drag race car can either be a production vehicle modified in a certain way or a vehicle explicitly developed for drag racing purposes.

Drag racing enthusiasts will tell you that anything with four wheels and a motor can be drag raced. Production cars that come off a factory assembly line are perhaps the easiest to drag race with, as they are readily available to their owners.

Dedicated drag racing cars would also have begun life as the factory-produced vehicle. However, vehicles are likely to be stripped down to the bone and rebuilt with the highest level of modifications, mechanically, electronically, and technically.

Professional classes of drag racing take on a completely different level of race cars. These vehicles are genuinely exceptional in their design and execution. They produce copious amounts of horsepower and are fed by concentrated types of fuels. Every aspect of these race-bred vehicles is specifically designed for a single purpose – to go extremely fast in a straight line.

Essentially, a drag race vehicle is competitive enough to line up and race against a rival competitor, with the notion and ability to win that race.

Drag racing cars: what are the safety requirements?

The framework around drag racing is well documented and pays attention to the sport’s many safety aspects. As with all motorsport, the possibility of accidents is high. Motorsport, in general, is made up of high-powered vehicles racing within proximity to each other. This can create a volatile atmosphere that needs to be sanctioned and controlled in a precise manner.

Below, we will outline some of the basic requirements of a drag racing vehicle.

Perhaps the most crucial element of drag racing is the safety of the vehicle. Apart from having a safe and reliable engine and braking system, the vehicle must meet its structural makeup requirements. Depending on the class that the vehicle is racing in, specific pre-requisites must comply with the level.

The chassis of the vehicle must be stable, maintaining a high level of structural integrity. A roll cage or cabin reinforcement is required. Mounting points for the engine, transmission, and shafts need inspection and strengthened where necessary. The harnesses or safety belts also need to be flush mounted to the vehicle and have high tensile strength.

The vehicle must have an accessible fire extinguisher or a built-in fire extinguishing system. A kill switch that allows the vehicle’s engine to turn off must be visibly mounted outside the vehicle. This allows a race marshal or safety crew to kill the engine in the event of an accident safely.

When it comes to other safety aspects of a drag racing vehicle, higher-powered drag cars require secondary braking systems. A manual or electronically operated parachute mounted to the rear of the vehicle allows the vehicle to have an assisted braking method.

Keeping the above in mind, one must also note that the specific safety requirements are defined in more detail, based on the rules and regulations set out by the motorsport governing bodies. All types and classes of drag racing vehicles have mandated requirements, which must be adhered to when participating at specific venues or events.

With the safety aspects directed at the vehicles, general track safety is also vital in maintaining a non-hazardous environment for drivers, crew, and spectators.

It is no secret that a large part of the drag racing community has drag raced on a public road at some point. This form of drag racing, while not legal, still draws massive appeal from petrol-heads all across the world.

Despite being non-sanctioned or unregulated, individual public road drag races still follow some form of organization. Mainly led by drag racing enthusiasts, the organizers may enforce specific rules to keep both the drivers and spectators as safe as possible.

When it comes to the vehicles themselves, the rules and scrutineering process may be a lot more relaxed. However, this does not negate the fact that the vehicles need to be in tip-top shape. Ultimately, a safe vehicle makes for a safer race environment. The onus would lie upon the vehicle owner to maintain the safety aspects of his or her vehicle.

This said, public drag races had borne witness to some horrific crashes, often leading to fatalities amongst the drivers and spectators. The lack of safety personnel or medical staff at these gatherings is generally the case. With no trained first responders on-site, accidents cannot be dealt with effectively.  For this reason, it is neither advisable nor encouraged to participate in these types of events.

If we look back to a drag racing car, it is stated that almost all drag race vehicles start of life as factory-produced vehicles. The question of “built not bought” is a common one, often heard in all drag racing communities. What does this mean?

Drag racers often argue that a cheaper or older vehicle that has been modified somehow holds greater significance than one driven off the production floor onto the drag strip. This argument stems far and wide and is fuelled more by opinion and ego rather than fact.

All cars are built, and even the slightest upgrade or modification can be further defined as a “build.” However, in parts of the drag racing community, the concept of a “build” refers to a vehicle that was upgraded or modified using dedicated aftermarkets race parts and accessories, often costing less than a new production vehicle.

Nowadays, car manufacturers are on board with developing and selling vehicles that can very well be driven off a showroom floor, straight onto a drag strip. High-performance vehicles leave the factory already equipped with features that allow the vehicles and their owners to be competitive in drag races.

It all boils down to budget. Some will argue that if you have the means, instead purchase a race-ready vehicle, negating the need for significant aftermarket developments. This can provide the best of both worlds, be it an afternoon at the race track or a leisurely afternoon drive along the coast.

The flipside of this argument is that these vehicles’ drivers are not skilled drag racers, as they simply have deeper pockets. Those who modify older vehicles from the ground up may argue that they are the real “racers” as they spend more time tuning, testing, and developing their vehicles, often on a limited budget.

Considered to be one of the oldest forms of motorsport, drag racing’s popularity continues to grow. The thrill of lining up next to a vehicle in anticipation of the traffic light turning green, then speeding off is something that most drivers will resonate with.

As the sport develops, more and more dedicated facilities are being built to cater to the enthusiast. This also makes provision for greater focus on the safety of the drivers who compete in this discipline. Vehicles are becoming faster by the day, reaching speeds never heard of before.

An equal amount of awareness must be placed on the safety of these vehicles and their occupants. In this respect, one who undertakes to compete in a drag race must be well educated in the safety aspects and understand the sport’s risks.

A well-maintained vehicle is a vital part of this understanding. While one could theoretically drag race a vehicle with a cracked windscreen, it should not be considered safe by any means. Any defects or faults on a vehicle must be addressed or attended to before drag racing a vehicle.

How To Drag Race Legally – The Complete Guide