Explained: Why Drag Racers Burn Out 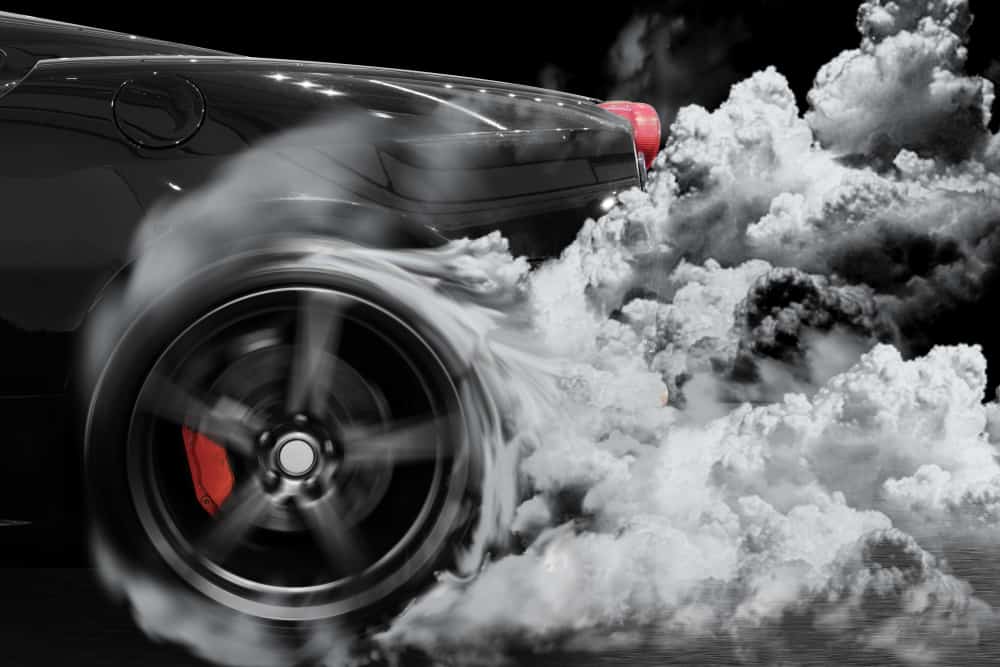 If you have ever been to see a drag race, either a legal race on a track or an illegal race on the street, it seems that all drag racers spin their wheels in a burnout before every race. The burnouts may seem to be pure show-boating, but there are real reasons behind the smoke and noise. This is why drag racers burnout:

Burnouts before a drag race serve to heat the tires of the car, softening the rubber, providing more traction for the start of the race. The burnout also removes any debris from the tires. Spinning the wheels leaves a layer of rubber on the road surface, providing better traction in the future.

The burnout before every drag is far more than just showing off or showmanship. Without a burnout, the tires on drag racing cars would not perform as well and would have far less traction at the start of the race. Let’s examine some of the reasons why drag racers do burnouts, how effective burnouts are, and whether or not they always work.

Why Do Drag Racers Spin Their Wheels?

Drag racers spin their wheels before the start of every race, whether it is on the street or on the track, for many reasons.

The smoke and noise are not for show, and without a burnout, the cars would just spin their tires at the start of the race and barely move forward at all.

The burnout is crucial for every drag race for many reasons, but here are the three main reasons for burnouts before drag races:

To Heat Their Tires

The burnout that every drag racer does before a race is for the primary reason of heating the back tires of the car to improve the traction of the tires for the race.

Drag racing tires are also known as slicks because they have little or no tread grooves in them. This means that if the tires are very smooth, but if they are heated, the rubber becomes soft and “”sticky,”” providing more traction than treaded tires could.

When the driver spins the wheels of their car, the tires rub aggressively against the surface of the road or track, heating the rubber, making the tires softer and stickier, ensuring that the most amount of power from the engine is transferred to the road for the start of the race.

If drag racing tires are left cold, they have very little grip at all, but when they are heated and soft, they provide an incredible amount of traction.

For this reason, drag racers spin their wheels before every race to ensure that their tires are sufficiently heated to provide as much traction as possible, ensuring that they have the best possible start to the race.

To Clean Their Tires

The burnout that occurs when drag racers spin their wheels not only heats the tires but also removes any foreign debris from the rubber.

When drag race tires are used, they are very sticky from being heated when drive, which means that they collect a lot of debris on the way to the start line.

Debris in or on the ties prevents even traction for the tire. The burnout helps to fling off any foreign materials that have adhered to the tire, allowing the tire to heat evenly during the burnout and ensuring that the tire has even traction before the race.

Removing debris from the tires also helps the tires last longer and reduces the risk of punctures and damage.

Drag racing tires are very soft when they are heated, and if any debris remains on the tires for the race, it is likely to cause a blowout which can be very dangerous for both the driver and for spectators of the race.

Burnouts clean the tires and ensure even traction and heat in the tires for the start of the race.

To Leave Rubber On The Startline

When the wheels of a car are spun during pre-race burnout, the tires leave behind a small amount of rubber on the road.

This rubber collects over time from multiple burnouts, as many drivers will do burnouts in the same locations, especially if the races are taking place legally on a track.

Street drag racers use this aspect of burnouts to lay a good area of traction on a road surface that they frequently use for drag races.

These areas of good traction allow the racers to achieve even higher launch speeds than just doing burnouts alone.

The rubber that is built up on the road surface provides so much traction that inexperienced drag racers often lose control of their cars because they pull away so quickly when starting on these areas.

Normal road surfaces are not ideal for drag racing starts, and so this patch of traction ensures they are able to achieve the highest launch speeds that their cars are capable of.

Do Burnouts Really Make A Difference?

A well-executed burnout can be the difference between winning and losing a drag race.

Drag races are short, straight, and incredibly fast races. This means that the most important moments of a drag race happen at the start.

The more power from the engine of the car that can be transferred to the road, the faster the car will launch from the line, the more quickly the car will reach its top speed, increasing its chances of winning the race.

The burnout is the best way to prepare drag racing tires for a race, increasing the traction of the tires, allowing the highest energy transference possible, improving the car’s speed off the line, which greatly improves the car’s performance in the race.

Tires that are made for drag racing are not much good if they are cold due to their lack of tread, but as the tires are heated, their traction increases drastically.

Drag racing tires that are heated during a burnout become so soft and sticky that if they are left to sit still on the road surface, they are very likely to stick themselves to the tarmac.

The pre-race burnout is incredibly important and makes a very significant difference toward the outcome of the race. The cars would simply not be able to launch efficiently without a well-executed burnout just before the race.

While burnouts are very important for every drag race, and there may not be much of a race without them, there are some instances where burnouts may not be very effective or may even hinder a drag car.

Burnouts are only effective for tires that are made to be drag racing tires or on slick tires.

Normal road tires will only be slightly heated by the act of a burnout, but it will not be as effective as it is for slick racing tires.

In fact, burnouts with normal road tires are likely to destroy the tires rather than effectively prepare the tires for a race.

This is why many amateur drag races do not start with a burnout, but the drivers will rather take a hot lap around a track or around the block to heat the tires before the race.

Burnouts must be done carefully, even when they are done with racing slicks. If a burnout is held for too long, it may damage the tires, even if they are made for drag racing, and this will hinder the car’s performance rather than improving it.

Drag racers perform burnouts before races to heat and clean their tires which drastically improves traction, as well as leave a good area of traction on the start line for future races.

The burnout looks very impressive and may seem ostentatious, but they are never done as a performance before a race. Pre-race burnouts are always functional, and drag racing cars would not perform as well without them.

The tires of a drag car are heated and softened by the burnout, which makes them sticky, providing the necessary traction for a perfect racing start.

The burnout process also purifies the tire from any foreign debris that could hinder the performance of the tire or damage it during the race, causing blowouts and putting the driver and spectators at risk.

Leaving a good area of traction in the start line further improves the tires’ ability to propel the car forward at the start of the race, and burnouts leave a small amount of rubber in the road, which supplies this area of traction for future race starts.

The next time you witness a drag race and the drivers perform burnouts before the race, they are not showing off, but they are preparing their tires for the race! Without burnouts, drag races would be much slower, much less intense, and much less entertaining!

Especially in most recent years, Formula One has been...
Read more

15 Best F1 Drivers Of All Time

Formula One is the pinnacle of motorsport, attracting the...
Read more

There are two iconic names associated with the Formula...
Read more

How Much Does A Formula 1 Steering Wheel Cost?