Do F1 Cars Have Traction Control? 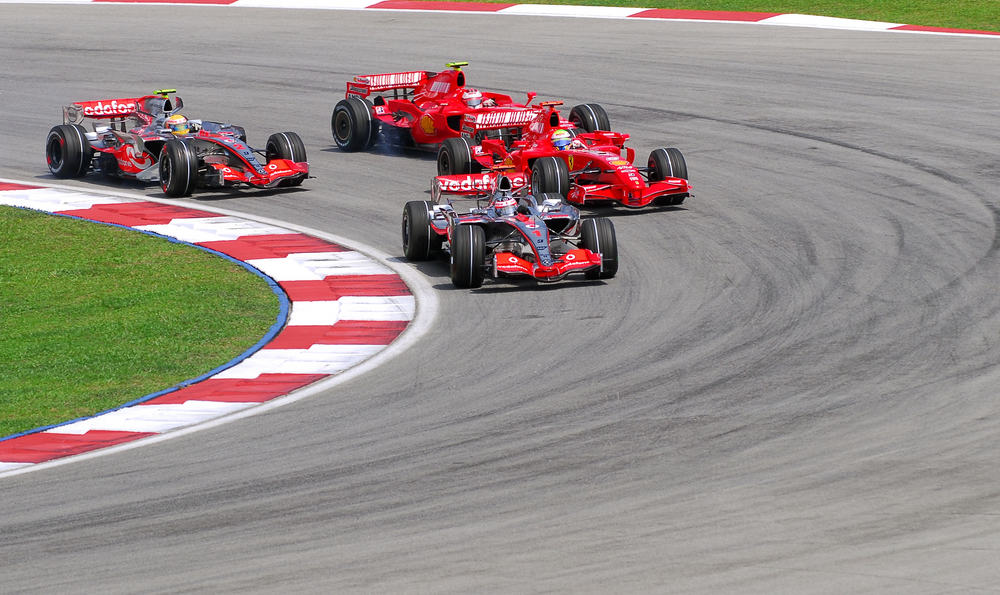 Modern-day Formula 1 cars have evolved into sophisticated racing machines with modernized equipment that monitors and controls various mechanics of the F1 car. One of these advanced pieces of equipment for an F1 car is traction control. You might be wondering whether a modern F1 car is factory-fitted with traction control.

Modern F1 cars do not have Traction Control (TC), making them more difficult to drive. Traction Control is considered a “driver assist.” Driving assists do not challenge an F1 driver’s real driving ability. So, in 2008 the FIA banned the use of Traction Control together with ABS.

Why Do F1 Cars Not Have Traction Control?

Before diving deeper into this topic, we first need to understand traction control and its introduction to an F1 car. Traction control is an automated system that regulates the amount of power from the engine to prevent the car from losing traction to the rear wheels of the Formula 1 car.

You might have probably felt the effect of accelerating under slippery conditions when you try to accelerate, and the car seems to slip and slide and lose its grip on the road surface. The loss of traction and grip on the car is due to the power and torque from the engine trying to drive the car’s wheels faster than the current conditions of the car and the road surface.

Traction control was pioneered as a safety mechanism on-road vehicles to aid drivers in improving the performance and control of the car under wet conditions.

The first implementation of traction control appeared in the early eighties on Toyota road cars with an anti-skid system, before a few German car manufacturers like Daimler and BMW introduced their versions of the traction control system.

Then in 1990, the FIA allowed traction control to be used onto Formula 1 cars since F1 cars had become too difficult to drive. Formula 1 teams were allowed to use Traction Control on their cars for a few seasons before being banned by the FIA four years later, in 1994.

Formula 1 is an extremely fast-paced and competitive sport, and the race relies on the driver’s abilities over the car’s capabilities. For this reason, the FIA decided to ban the use of Traction Control on modern Formula 1 cars.

And, ever since the ban on traction control in 2008, modern F1 cars have been racing without these driver assists. We are now seeing a bigger spectacle of Formula 1 racing that also creates unpredictability for Formula 1 racing fans.

Do F1 Drivers Use Assists?

The braking systems for Formula 1 cars are crucial for stopping or slowing down an F1 car during a Formula 1 race. Further cornering points are compromised if the car is not slowed down at the correct speed or the correct braking point. This all results in having a big impact on the lap times for the driver.

The Antilock Braking System or ABS, as it is commonly known, aims to stop the car under braking and prevent the wheels from locking up. When the wheels do lock up, it causes a “flat spot” on the tire, which will also cause a little bit of vibration inside the car, as the wheel is no longer fully round.

In 1990, ABS was introduced onto Formula 1 cars to aid drivers in braking and cornering during an F1 race. In 1994, the FIA banned the Antilock Braking system on Formula 1 cars to make it more difficult for a race driver to steer and control the car.

Driver assists are automatically controlled systems that make it easier to steer and control the car under difficult and harsh conditions.

Traction control, ABS, and Stability control on an F1 car were referred to as driver assists and have since been banned in 1994. Without the use of driver assists in an F1 race, it helps to make the F1 races more unpredictable, challenging, and exciting for race fans to watch. Now drivers have to rely on their skills to steer and control an F1 car instead of driver assists.

What Is The Most Important Part Of A F1 Car?

When looking at an F1 car, with all its intricate pieces of mechanical ingenuity, you might be wondering what the most important part of the car is. In an F1 car, the front wing is considered one of the most vital parts of the race car.

The downforce for the car is created by the endplates situated on the front wing of the car. Once the air comes into contact with the front wing, it then slides over the top. The purpose of the endplates is to avoid the high pressure of air from pushing beneath the car’s base.

The weight from this air gets pressed onto the endplates of the car, which then pushes the car down onto the track surface, thereby providing the drivers with better grip, control, and steering responsiveness.

An F1 car that does not have the ideal front wing setup will be even more difficult for the driver to steer the car and eventually cause him to lose time on the track.

What Is DRS And How Does It Work?

If you are a fan of F1 racing, you would frequently hear the term “DRS” being mentioned, and you might be wondering what DRS is and how it works. DRS is an abbreviation for Drag Reduction System and is a movable flap on the rear wing of an F1 car.

Opening the flap reduces aerodynamic drag and makes it easier for the car to accelerate. In 2011 the concept of DRS was introduced to make overtaking easier.

Some see DRS as an essential weapon in a driver’s arsenal, and others believe that DRS makes racing artificial. When DRS is enabled, the car’s rear wing flap opens and gives the pursuing car a speed increase of up to 20 km/h. DRS is restricted by F1 rules and is only permitted when the following criteria are met.

There are approximately two to three DRS zones in each race, and they are pre-defined on the circuit map and are only found on the straights of the circuit. A light on the steering wheel dashboard notifies the driver when DRS can be enabled.

The driver then pushes the DRS button on his steering wheel, opening the car’s rear wing flap. The flap automatically closes when the driver taps on the brake at the end of the straight.

How Do F1 Cars Launch?

Modern F1 cars no longer use launch control as that is also considered a driver assist. As we know by now, any automated system that enhances the driver’s ability to drive an F1 car has now been banned. Newer Formula 1 cars must rely on the drivers to control and steer their cars instead of driver assistance.

During race starts, drivers must precisely control the clutch together with the engine’s power to get the F1 car off the race grid. Now, we shall dive a little deeper to understand how the clutch on an F1 car operates.

The clutch on an F1 car is situated between the gearbox and the engine and is the most important piece of equipment that transmits enormous acceleration from the engine to the gearbox.

The clutch is a small piece of equipment manufactured by only two manufacturers, AP Racing and Sachs. The clutch makes use of carbon plates and is “electro-hydraulically” activated, meaning that the revs and gears are matched by a computer when the driver chooses to select a gear.

The clutch must endure tremendous strain as it must transmit immense horsepower from the powertrain to the transmission. Hence, the design of an F1 clutch is entirely different from the modern road vehicle.

When a driver needs to engage the clutch, he does so using a pair of paddles located on the back of the steering wheel. The clutch is operated manually when the driver must pull away from a standing position.

On a warmup lap, race engineers often request drivers to find the “bite” point. The bite point is when you rev up the engine, and you gradually release the clutch until you feel the car starting to gain forward momentum. This is termed the “BPF” or “bite point find.” At this position, the clutch paddles are set to match the bite point.

The car is pushed onto the grid position while still in neutral gear. Seconds before the race starts, the driver pulls the clutch paddles and engages first gear while holding in the engine revs at approximately 13,000 revs per minute (rpm).

While the race lights are still on, the two clutch paddles are released to their preset position, pushing the clutch into its BPF position. The driver releases one of the clutch paddles, that further releases the clutch mid-way between being fully released and the bite point, which allows him to balance the throttle to control wheel spin and prevent the car from stalling.

Once the car has started moving forward and the wheel spin has been reduced, the driver disengages the second clutch paddle. With the clutch fully disengaged, the engine’s full power is passing through the transmission into the car’s wheels.

To change gears on the car, the driver shifts the paddles at the back of the steering wheel while the electronic onboard computer cuts the ignition. The clutch is managed electronically and then switches between gear ratios. The whole process of engaging gears happens in approximately 0.005 seconds.

In conclusion, banning driver assists like ABS, Traction control, and stability control has benefited from making F1 races more exciting and unpredictable. Now drivers must fully rely on their driving ability instead of depending on drivers’ assists on the car to win races.

Formula 1 races have become a grand spectacle, and drivers need to up their driving skills to win races and succeed in the drivers’ championships. It is no longer the car winning the race but more the driver winning races instead.

Louis Pretoriushttps://onestopracing.com
Previous article
Best F1 Finishes
Next article
How Important Is The Car In F1?