Do F1 Drivers Keep Their Helmets? 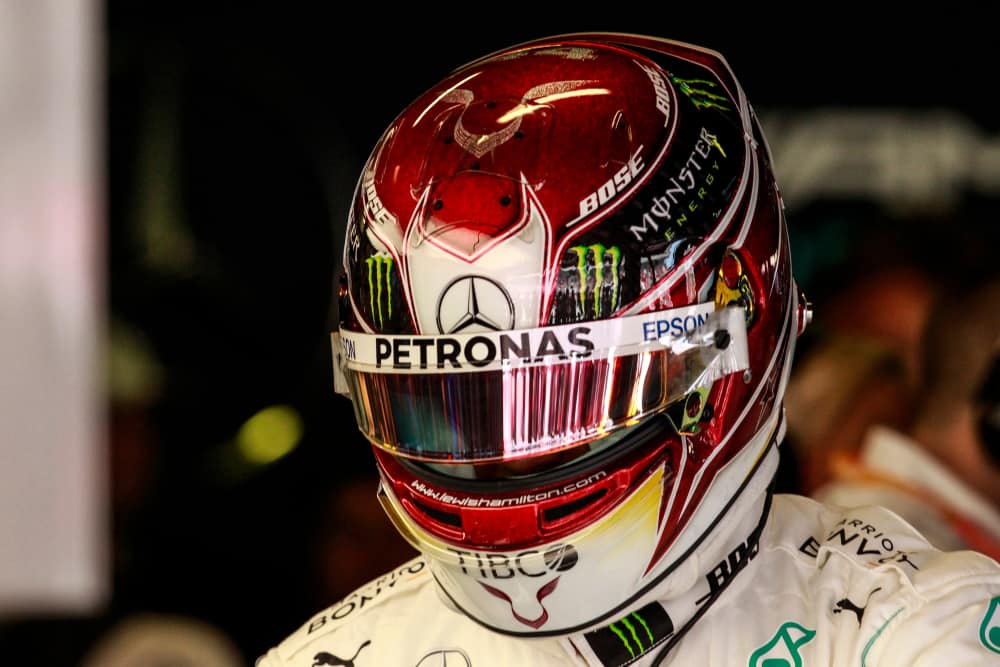 Ever watched Formula 1 and looked at the racers with their beautiful intricate helmets get into their cars. And be amazed by how cool their uniforms are and wonder if they get to keep it or at least take it home with them? Yeah, same here! I always wondered about this, so I decided to get to the bottom of it!

Drivers get to keep their old helmets, displaying them in cases, or some teams keep them in display cases at the home track garages. However, during its usage time, these helmets stay in the garages for race day. In addition, at times, some of the helmets will be donated to charity.

For all of that great formula one fan out there that hope to get their hands on one of these talented race drivers’ helmets, be prepared to pay a lump sum of money for it. However, it will probably be worth the money, especially if you intend to use one that is still in good condition.

F1 drivers will typically have two types of helmets available for them during races, one being the primary one and the other, of course, a spare in case any problems are encountered throughout the day. The two types of helmets can also be configured for different weather scenarios, such as one would be better optimized for wet conditions than the other one.

Though there are two high-quality helmets for each driver during a race, one would think these helmets would last over the entire racing season. But, instead, the drivers go through around a dozen of helmets throughout each season. This means that all drivers will most likely use a different helmet almost every time they go onto a new track.

It is due to wear and tear, which ‘surprisingly’ happens when traveling above 180mph around a circuit. Many air particles, dust, sand, and other debris in the air while driving scratch the painting off of the front vehicle and the driver’s helmets. You’re probably asking why they don’t just respray the helmet.

Unlike the car’s chassis, the helmet can’t be taken, scraped down, and then repainted. It will cost too much, and on top of that, some nicks might have damaged the helmet’s integrity; therefore, a replacement is better. Many helmets also end up having technical problems such as the radio that will need to be fixed or replaced entirely.

Imagine wearing a heavily padded helmet through an hour or more intense gym routine. The smell afterward can be pretty strong from the amount of sweating and so forth. That is also a big reason why helmets need replacing after a while, as the inner padding after a race or two become worn out quickly.

Formula one drivers have specially designed high-grade carbon fiber helmets built for speed and, on top of all, safety like no other. The carbon fiber material allows for an extremely durable helmet that is also lightweight. The standard size is around 1,4kg (3,08 pounds), depending on the driver’s head size.

The lighter the helmet, the less strain is added upon the driver’s neck and shoulders when driving. Though it’s light, the helmet can withstand a 1.5-ton car, impacting the helmet from both sides. Regulations state that all helmets must withstand an impact of 9.5 m/s or 34.2 km/h.

Throughout the years, drivers were able to customize their helmets as they pleased, suit their style, or even be used for their sponsorships. Some would even commemorate special events on their helmets through creative designs.

These creative designs were put on hold during 2015 and onwards racing by the FIA, which stated that all drivers had to stick to one design style throughout their racing season. The FIA’s main argument for their decision was that drivers that swapped between helmet designs through different races made it difficult for spectators or even the commentators to differentiate between drivers in the split second they drove by.

This decision got massive backlash from fans and the drivers themselves, who stated this decision did not make sense, as most of the team logos are still allocated on their helmets and their cars. Thankfully this rule was pulled back in 2020, and drivers could express themselves again through their helmets.

The customization makes the helmets even more attractive as the drivers themselves chose the unique design, which expresses themselves, and that attracts so many buyers to want one for themselves.

Old Helmets Given Away

Though helmets aren’t used for a long time, they do get used afterward and see the light of day to find themselves either in a display case or in a fan’s hand. The teams of formula one drivers will sometimes keep their driver’s helmets if they won with it or if the helmet was a favorite.

Some helmets will even go to sponsors and end up being bided away at charity auctions. The Wings for Life charity saw a massive benefit from Red Bull drivers donating their helmets. Drivers such as Sebastian Vettel that won the 2013 Grand Prix auctioned the helmet he wore for around £72,100. A large amount was raised for charity from simply auctioning off a winning Formula One helmet.

Though some helmets end up with the Formula One team or others end up being auctioned, some of these helmets are bought by passionate fans on their own. Buying one would set you back $4000 each, though it probably would be more if an actual driver used it.

To conclude, no, the drivers don’t necessarily keep their helmets as they tend to go through at least 10 to 15 in a season or more. However, this doesn’t stop either the team or the driver himself from taking a winning helmet home if he wants to. It all boils down to what makes that specific helmet so special, was it a win, was it a first race helmet, or perhaps a helmet with sentimental value.

In the end, helmets are great assets to drivers in their general requirement need but can become more to people. It is a symbol of teamwork, an art piece, a winning team, an iconic driver, and so forth that adds to its value by far more to its original purpose.

Louis Pretoriushttps://onestopracing.com
Previous article
How Do F1 Penalty Points Work?
Next article
How Many F1 Drivers Have Died?