What Size Champagne Bottles Are Used In F1? 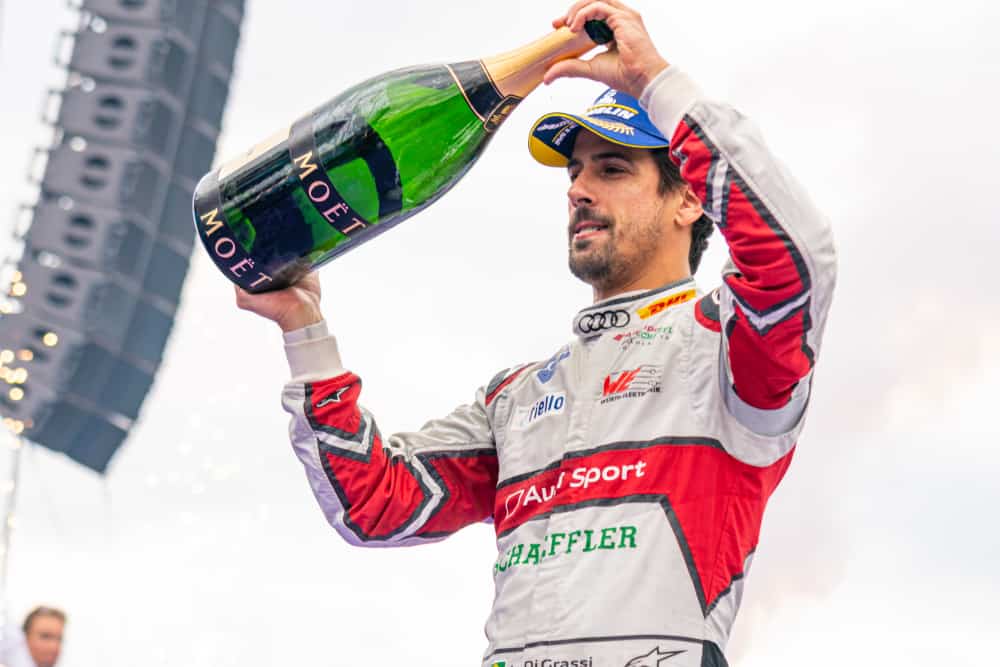 Ever watched the Formula 1 drivers get up onto the podium and waste a perfectly drinkable bottle of bubbles?! Not only is it better than perfectly drinkable quality, but it also looks larger than life. That’s because they are, and are specially produced for the occasion.

The bubbly used on F1 podiums has switched in the 2021 season to Ferrari Trentodoc sparkling wine and is no longer champagne. The Jeroboam (approximately 104 ounces / 3 liters) of sparkling wine will be presented to the victors of Formula 1 for the upcoming three years in a deal starting in 2021.

For the first time in Formula 1 history, a bottle of sparkling wine is being used instead of champagne, and it’s a pretty big deal. We have all the details, as well as information on whether you can get your hands on a bottle and what ties champagne has with the formula 1 industry in general.

What Size Champagne Bottles Do They Use In F1?

Traditionally, a magnum (1.5 liters / about 50 oz) of Moet & Chandon champagne has been presented to formula 1 drivers as they stand on the podium, basking in their victory! With the change in sponsorship this year by Ferrari, a nod to the sport’s Italian heritage and the producer’s shared values of passion, innovation, and the pursuit of excellence is being given.

Ferrari Trento is not only an award-winning sparkling wine producer but, like Formula 1, has its roots in Italy, crafting its luxury wines for over a century to become a leader in its field. The bottle that is used on the F1 podium is a special three-liter bottle of Trentodoc Blanc de Blanc made from Chardonnay grapes.

The 2015 vintage is available for purchase by the public in a limited edition bottle, an exact replica of those used on the podium, bearing the brand Ferrari written in large letters down the side of the bottle.

The History Of Formula 1 And Champagne

While champagne is often awarded at ceremonies from different sports, the bubbly drink has a special history with Formula 1, dating back to the 1950s. The Formula 1 race in France used to take place at the Gueux circuit in Reims, the epicenter of champagne production. When racing in the green vineyards of this region, it was an obvious choice to present the winner with a bottle of the region’s finest champagne.

For the first time this year, the tradition of champagne has been replaced by sparkling wine. While you may be under the impression that the bubbly stuff podium drivers spray out after a race is just an afterthought, it is absolutely not.

The wine business is big money, and the multi-award-winning Ferrari brand will now have a new stage from which to showcase their sparkling wine, introducing it to new audiences all around the world. With fans becoming so familiar with the race’s sponsorship brands, this is an unusual path into racing sponsorship and the brand advertising that comes with it.

Not only does the brand get used on the podium, but also in the hospitality areas at the racing tracks and in bars, restaurants, and hotels in the host city throughout the weekend of the race. With the increased exposure, a deal such as this with Formula 1 is an incredible marketing opportunity for a champagne or sparkling wine house.

What Size Bottles Does Champagne Come In?

Champagne bottles come in many different sizes, and the F1 podium has seen a number of these, with some of them becoming more traditional and being used for longer than others. But what are the different sized bottles that you get, and what are they called?

There are bottles that go up in size to thirty liters in capacity, known as Melchizedec ou Midas, though these are rare and not typically available on the commercial market. The Nebuchadnezzar is the largest commercially available bottle and contains a whopping fifteen liters, enough to fill 120 flutes of champagne!

Why Do Formula 1 Drivers Spray The Champagne?

Fast forward a decade, and like most traditions, this one of spraying the crowd with champagne happened for the first time by accident. Jo Siffert won Le Mans in 1966, a 24-hour race, and the bottle of champagne he was presented with had been sitting out in the sun, causing pressure to build up and release as the crowd was accidentally sprayed with champagne.

The following year, Le Mans was won by Dan Gurney, who deliberately copied Siffert’s move the year before, spraying the crowd. It was from here that the tradition was born. While the original bottle was a loosely corked magnum of Moet and Chandon, that changed to a Jeroboam of GH Mumm’s Cordon Rouge in 2000, with subsequent changes since (Chandon and Carbon).

Is Ferrari Sparkling Wine Linked To The Ferrari Car Brand?

Most often, a name many associates with Formula 1 anyway, the Ferrari surname is not uncommon in Italy. However, the sparkling wine company that was launched in 1902 by Giulio Ferrari is not related to the Ferrari car brand by way of family. The winery was passed on to the Lunelli family mid-century.

While there is no association between the winery and the car producer, both are proud companies striving for excellence and firmly rooted in Italian tradition. With the three-year deal that sees the Ferrari sparkling wine come to the podium, both brands can be linked only through their association to the sport.

The sparkling wine bottles used on the F1 podium have increased in size over the years since the tradition first started in the mid-1960s. The Jeroboam contains enough liquid to really create a fizz and keep the spraying celebration going just a little longer, leaving the drivers a sip at the end too. Limited edition bottles are available for purchase if you want to celebrate like a winner too.

Louis Pretoriushttps://onestopracing.com
Previous article
Where Do F1 Drivers Stay In Austin?
Next article
Best F1 Teams Of All Time