Do F1 Teams Make Their Own Cars? 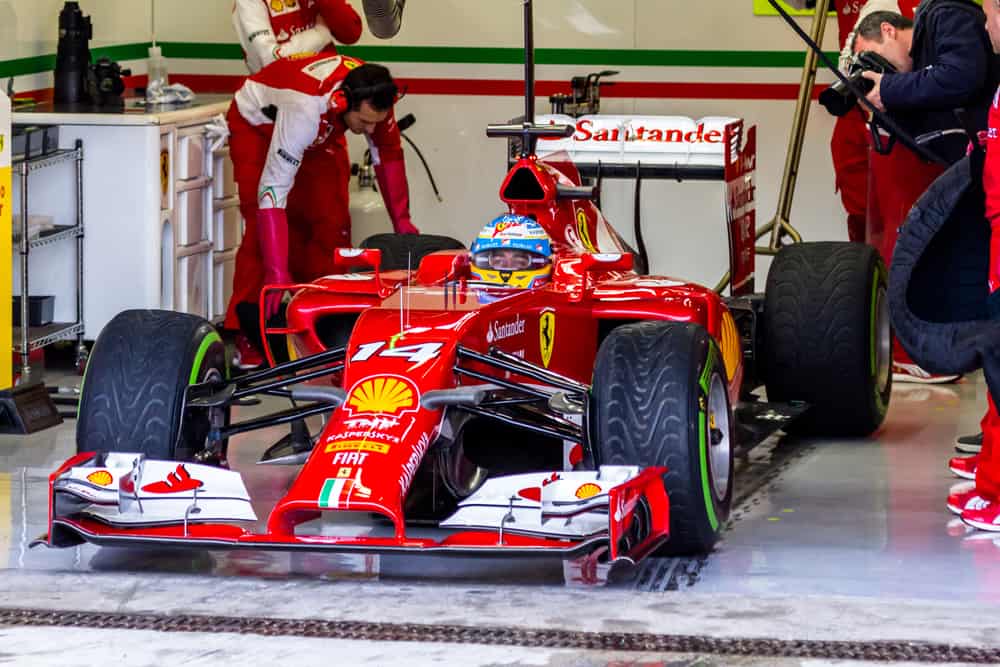 Cars are what Formula 1 is all about. You can have a good driver, but without the right car, they can only do so much. This has led me to wonder how much control F1 teams have over the manufacturing of their cars because it is vital to doing well. So, do F1 teams make their own cars.

F1 teams do make their own cars. They assemble everything, but the percentage of outsourced components differs between teams. Some make everything in-house, while others do the complete opposite by outsourcing as much as possible.

As the number of in-house components, compared to those made by other companies, differs significantly between teams, it’s best to hop straight into the article and answer the main question.

Do F1 Teams Make Their Own Cars?

Formula 1 teams all make the bodywork for their cars. However, the in-house manufacturing ends there for some teams, as they outsource everything from their chassis to the engine. It all depends on the team, as each team has its own setups.

Four manufacturers make all the engines used in Formula 1. These are Mercedes, Ferrari, Renault, and Honda. Formula 1 engines are incredibly complicated to build, so only four companies manufacture them. Mercedes, Ferrari, and Renault (Alpine) all have their own teams, and Mercedes and Ferrari also provide engines to other teams. Honda does not have their own F1 team but supplies two teams.

Certain parts are the same on all the cars, and the FIA and its technical partners provide these. These include the onboard cameras, the rear light, the accident data recorder, tires, and fuel flow meters.

The following section will discuss which teams use what engines, what parts are made by teams, and what components they outsource.

Some Formula 1 teams make almost everything that goes into their car in-house, whereas others outsource significant parts of the manufacturing process. At the same time, others are somewhere in the middle. So, let’s look at all the current F1 teams and see what parts they do and don’t make themselves.

What Parts Do Mercedes Make?

Mercedes are one of the wealthiest teams on the grid, and as well as producing almost everything in-house, they also supply multiple teams on the grid with engines and other vital components. This has been a successful policy in recent years, as they have claimed every Constructor’s title in the turbo-hybrid era.

What Parts Do Red Bull Make?

Red Bull was initially meant to start manufacturing their own engines from the 2022 season after Honda announced their withdrawal from F1. However, at the start of this year, Honda opted to return to the sport, and as a result, they’ll continue to make the engines for Red Bull and AlphaTauri until the end of the 2025 season.

What Parts Do Ferrari Make?

Ferrari is the wealthiest team on the Formula 1 grid, but, in recent seasons, their financial superiority hasn’t translated to dominance on the track. However, as they build their own engines, they have the chance to turn their form around and get back on track. They’re in control of their own future, so it will be interesting to see what 2022 brings for one of the sport’s most iconic teams.

What Parts Do McLaren Make?

McLaren has had a turbulent past regarding engine suppliers in recent years. Before 2015 they ran Mercedes engines, but from the 2015 season, they opted to use Honda engines. The idea behind the switch was that Mercedes would be more focused on building engines for their own F1 team, whereas they would be Honda’s only customers in F1. However, the Honda project didn’t work out, so in 2018, they decided to use Renault engines. The Renault engines were an upgrade on Honda’s engines, but it wasn’t a significant one, and they also had reliability issues. This led them back to Mercedes for the start of the 2021 season, and McLaren signed a four-year contract to have their Formula 1 engines supplied by Mercedes.

What Parts Do Alpine Make?

Alpine is the only team on the Formula 1 grid with Renault engines. They are essentially Renault but under different branding. Their engines and other related components are manufactured in Paris, and their chassis production and managerial team are housed in Enstone, UK. However, there have been talks about Renault bringing on a customer team after McLaren opted to use Mercedes engines from the 2021 season. There were rumors that Williams would make the switch, but they recently extended their technical partnership with Mercedes, putting these rumors to bed.

What Parts Do AlphaTauri Make?

AlphaTauri is the only true junior/sister team on the grid. They are essentially Red Bull’s B-Team and are used to develop young drivers that are part of Red Bull’s academy to find the next talent to race for the main Red Bull team. As a result, AlphaTauri receives a lot of help from Red Bull and share similar components with the senior team.

What Parts Do Aston Martin Make?

Aston Martin has a close working relationship with Mercedes. In fact, in 2020, it seemed so close that the then Racing Point car was nicknamed ‘The Pink Mercedes’ due to its extreme similarities to the Mercedes car from 2019. Mercedes have continued to provide the Silverstone-based team with engines and gearboxes despite the controversy surrounding this.

What Parts Do Williams Make?

Williams has had a close relationship with Mercedes for a while. Since the start of the turbo-hybrid era, they have used their engines in 2014, and from the 2019 season, George Russell, a Mercedes junior driver, has raced for them. Their close working relationship will be even closer from the 2022 F1 season, as it was announced that Williams would now also run gearboxes made by Mercedes. They had previously manufactured their gearboxes in-house but decided to make the switch to focus on other areas of the car.

What Parts Do Alfa Romeo Make?

For the 2022 season, Alfa Romeo opted to reduce their reliance on Ferrari and start producing their own gearboxes and hydraulics. This has given them much more control over their car, but it is still debatable whether this will result in a performance advantage. Only time will tell.

What Parts Do Haas Make?

Haas’s policy of outsourcing as many things as possible has allowed them to build an F1 car without spending nearly as much money as their rivals. However, this has given them a lot less control over their cars and has meant they have to rely on other companies/F1 teams to provide them with parts. They have a very close relationship with Ferrari, as Ferrari provides them with many parts. Haas even has a satellite office staffed by many Ferrari employees in Maranello, Italy, where Ferrari is based.

F1 teams do make and assemble their cars. However, some teams make everything in their factories, whereas others outsource most of the components that go into their cars.