Why Do Formula 1 Cars Rev So High? 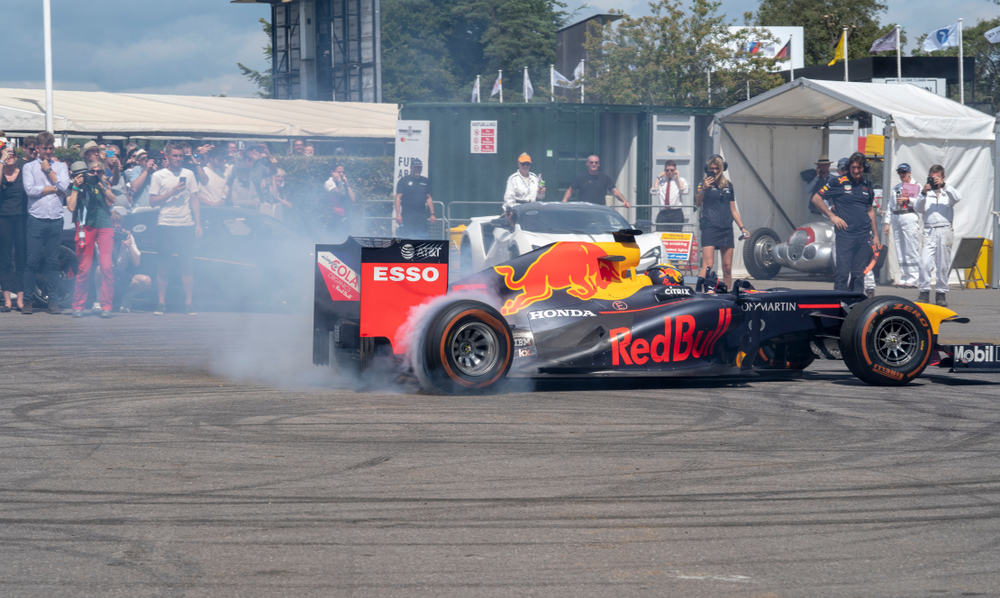 Have you ever watched a Formula 1 race live? Perhaps you were at the Canadian Grand Prix in 2007 when Lewis Hamilton achieved his first win in his rookie season or Michael Schumacher’s last win in 2006 at the Shanghai International Circuit. Whatever circuit you were at, one of your most enduring memories will have been the sound of the Formula 1 cars screaming past you at incredible speeds.

Formula 1 cars rev so high, so they can achieve the most power and create a better sound to make the sport more appealing to F1 purists. Engineers have several variables that they can adjust to increase power, and one of them is to increase the revolutions, which makes the F1 engines more powerful.

When the number of cylinders used in Formula 1 cars engines was reduced from 12 to 8 and then finally to 6 in the modern era, staunch Formula1 fans howled in rage. The V6 engines were initially limited to 12,000rpm but by 2022 this has been increased to 15,000rpm.

The higher an engine revs, the higher the power output. The latest engines in the hybrid era produce power from two different sources.

The first is the traditional method which produces power from the 1.6L V6 turbocharged hybrid engine. Combustion occurs at the top of each cylinder; the pistons are forced down, turning the crankshaft.

The crankshaft turns the main shaft in the gearbox, and the energy is driven down the driveshaft to the wheels.

The second power source is an electric generator/motor (Motor Generator Unit – Kinetic) that harvests electrical energy from the exhaust and braking, consisting of two parts.

The MGU-H attaches to the turbocharger, where the turbine shaft converts heat energy from the exhaust gasses to electricity. Energy is either sent to the MGU-K unit for immediate use or, if required later, to the battery for storage. This component of the engine is being abandoned in 2022.

The MGU-K attaches to the crankshaft. The MGU-K operates as a generator, recovering some kinetic energy dissipated during braking.

When required, it switches its role to an electric motor using the energy previously stored in the battery and the energy produced by the second part, the MGU-H. Rules limit the amount of power available from these two parts to 120kw.

We won’t concern ourselves with the MGU units.

Why Increase the Revs?

The primary way to achieve a large power output with a smaller engine is to increase the engine’s speed; this is easily demonstrated by driving in your family car. Moving off with the engine revving at higher speeds will produce more wheelspin and, ultimately, a faster acceleration.

Torque Gets The Car Going

Low down power (Torque) is needed at the start of a race, pulling out of a corner, or accelerating past a competitor’s Formula 1 car.

Torque refers to the amount of work an engine can exert. If you are in a car with a less powerful engine and you are struggling to pass a slower-moving vehicle up a hill, you may feel like the engine has run out of revs.

What has happened is that your car does not possess sufficient horsepower to generate enough revs to produce the required amount of torque to overtake the other vehicle.

Power is calculated by the amount of torque multiplied by the maximum Revs of the motor. Therefore, double the power is available to drive the wheels if you double the Revs.

All engines follow this rule and, in particular, Formula 1 cars. As the revolutions of Formula 1 cars increase, so does the torque available.

The effect of this is that Formula 1 car engineers must develop power units that can generate more revs and, therefore, more torque than typical V6 power units are capable of.

At maximum throttle, Formula1 cars rev at +-15,000rpm’s. Consider that – the six pistons must move up and down almost 28 times per second!

How Does The Engine Produce So Many Revs?

As discussed earlier, the engine produces power by driving pistons up and down in the cylinders through a process involving the crankshaft, gearbox, and drive shafts. This energy is transferred through the wheels onto the road, and the Formula 1 car moves.

There are two main dimensions in the cylinders that define the engine’s power.

These are Bore and Stroke.

Bore and Stroke work in relation to each other; the same power is produced by halving the Stroke and doubling the Bore.

The new Formula One engines are characterized as having an oversquare design; this means that the Bore is bigger than the Stroke.

In Formula One, a 2.5 bore-to-stroke ratio is typical; this means the width of the piston is 2.5 times larger than the distance it travels up and down in the cylinder.

The benefits of changing the dimensions in this way are:

Formula 1 engines rev at speeds that would destroy regular road cars. If your vehicle did deliver this kind of RPM, I imagine you wouldn’t be the most popular person in your neighborhood.

The short answer to why Formula 1 cars rev so high is that modern Formula1 cars need to be quick off the start, they need immediate acceleration out of a corner and down the straight, they need to achieve mind-boggling speeds to be competitive.

All this is achieved with a 1.6L engine, the size you may find in your family runabout or SUV.