What Does Out Lap Mean In F1? 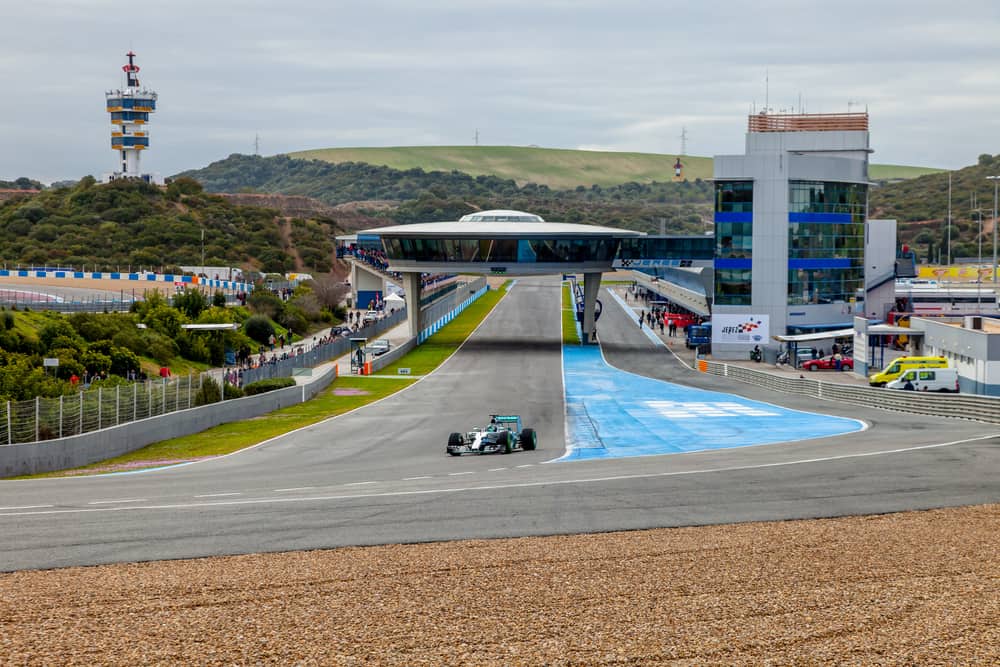 Formula One has its unique terminology that can be confusing to a new spectator. Words like In Lap, Out Lap, Flying Lap, Formation Lap, Fastest Lap, Safety Car Lap, and Parade Lap are all terms to describe different parts of the qualification process and the race itself.

The out lap is the circuit the Formula One driver uses to prepare the car for the actual qualifying lap. During the out lap, he will steer the vehicle in erratic patterns while braking and accelerating in an attempt to heat the tires and brakes until they are at the optimal temperature for the flying lap.

If the formula one driver manages to heat the tires and brakes sufficiently, the car will be optimum for the flying lap. The final position in the flying lap determines the drivers starting position at the beginning of the main Grand Prix race.

How Does A Formula One Race Weekend Work?

Formula One has some unique terminology that may sound confusing to someone new to the sport.

A race weekend comprises several different sessions, leading up to the main race on a Sunday.

On a normal weekend, which does not include a Sprint qualifying race, the Friday will consist of two practice sessions called P1 and P2. These are followed by a third practice session on Saturday morning.

This time is an opportunity for the team to set the car up in an optimal configuration for the unique track conditions and a time for the driver to familiarise himself with the track.

Because the different tracks worldwide are unique and have varying track limits, run-off areas, track designs, operating temperatures, altitudes, and variable weather conditions, it is a very important part of the driver’s preparation.

After practice, three qualifying sessions are run on Saturday (as long as conditions allow), Q1, Q2, and Q3.

At the end of each Q1 and Q2 session, the five drivers with the slowest lap times are eliminated until finally, in Q3, there are only ten drivers left on the track.

The final times in Q3 determine the starting order on the grid for the actual Grand Prix to be run on Sunday.

An Explanation Of The Different Lap Types

There are three types of laps that the drivers employ during the qualification sessions.

The Formula One Out Lap

To achieve the best possible time in qualifying configuration, the teams restrict the amount of gas in the cars and carefully control tire usage.

Formula One cars only perform optimally within a narrow band of tire and brake temperature ranges.

The traction and cornering ability are severely compromised if the tire temperatures are too low.

Similarly, if they heat up too much, the tires degrade very fast and experience blistering and ultimately complete failure.

The optimal F1 tire temperatures are.

The qualifying process is so important that the drivers first take the car on an out lap after leaving the pit lane.

During the out lap, the drivers work very hard to heat the tires and brakes to raise their temperatures.

The out laps often seem to be uncoordinated affairs, and the drivers seem to be acting as if they are under the influence. They drive like this to raise the tire and brake temperature.

By weaving aggressively during the out lap and using the brakes as often as possible, the drivers can raise the heat levels of the tires and brakes to racing temperatures.

The driver has to play a balancing act when warming up the tires and brakes on the out lap. If the tires are insufficiently hot, they will not provide the necessary grip, while they will degrade if they are too hot.

The Formula One Flying Lap

While the out lap is a time for preparation and ensuring the tires and brakes are at the optimum temperature, the fast lap is where the drivers work to move into the next qualifying stages.

In Q1, twenty cars compete for the fastest lap, and at the end of the session, the slowest five cars are eliminated.

Teams with a strong track record only run as fast as they need to, thus ensuring that the components vulnerable to wear are not stressed excessively.

Only fifteen cars run during the Q2 session, and once again, the slowest five cars are eliminated at the end of the session.

Even the top teams take this session very seriously, and they work to ensure that they are not eliminated. Most teams can only manage two circuits with the time available for the Q1 lap.

The Final Q1 session is run by ten cars, and they are all battling for pole position. Depending on the circuit, P1 or P2 are the optimal starting positions.

In this session, track records are achieved because the cars run on the fastest tires and the lightest fuel loads. The times achieved in the Q3 laps are rarely matched during the race.

On some circuits, achieving a very fast lap is difficult for the following reasons.

If the teams do not achieve a sufficiently fast lap time on the first attempt, they are sometimes placed in a precarious position if there is an accident or other event on the track, resulting in a red flag.

The Formula One In Lap

As the tires may be re-used during the next day’s race, once the driver has run the flying lap, he will start the In lap, which is run at speed to reduce the tire and brake temperatures.

This lap isn’t nearly as important as the two previous laps, but controlling the car, and running at a moderate speed, is vital to the car’s preparedness for the next session.

Driving slowly also ensures minimal tire wear and therefore ensures that they can be re-used later.

How the Formula One out lap is run can have a very important effect on the speed at which the flying lap is run, which decides the driver’s final position on the starting grid for the next day’s Grand Prix race.

If the drivers complete the out lap with the tires and brakes at optimal temperature, the car will be in a good position to ensure maximum cornering and traction ability.