Do You Have To Make A Pit Stop In F1? 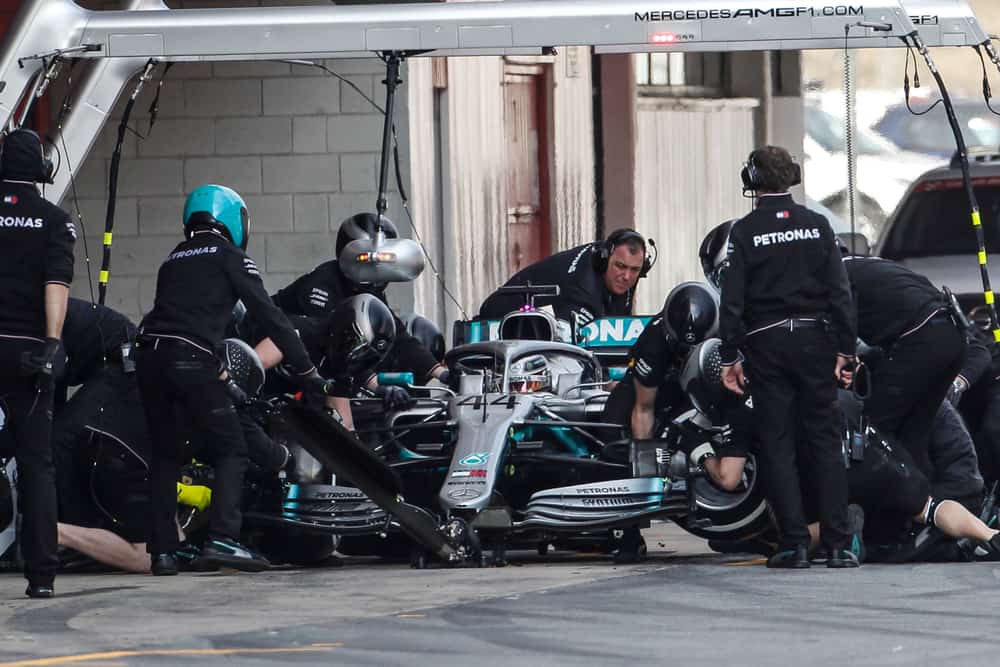 Blink, and you’ll miss it. Pit stops are a perfectly timed dance between mechanics in just a few seconds to change tires. They are a crucial moment in every race, and that made me ask the following question: do you have to make a pit stop in F1?

F1 cars have to use at least two different tire compounds during a race, so it is mandatory to make a pit stop. However, if the race starts in wet, there is no need to make a pit stop. Cars can do the entire race on a single set of wet/intermediate tires.

This means that, in dry conditions, races follow more or less the same tire changing pattern, while races with changing conditions can get very crazy, with different drivers trying different strategies.

Do You Have To Make A Pit Stop In F1?

Current regulations dictate that, yes, you have to make a pit stop. This is because at least two different tire compounds have to be used during a race, so drivers must make a pit stop to change tires.

Pirelli, the current F1 tire supplier, has 5 types of compound selection: C1, C2, C3, C4, and C5. The C1 is the hardest, and therefore the slowest and the one that lasts the longest, and the C5 is the softest, the fastest, and the one that wears out the fastest. Depending on the characteristics of each track, Pirelli selects three of these five compounds (For example, C2, C3, and C4), which we will call hard, medium and soft in each race.

Drivers start with one tire and have to change and put on a different compound. They can start with the mediums and switch to the softs or vice versa, for example. It is mandatory to make a pit stop, but if they didn’t do it, they would have it very difficult to do the entire race with a single compound, as the tires would end up very worn and would get a penalty as well.

The exceptions are races that start in wet. In these cases, it is not necessary to make a pit stop. Depending on the conditions, drivers start with intermediate or rain tires, and they can finish the race with them, although it is normal for them to stop and put on fresh tires.

If conditions improve and the track dries up, they would have to make a pit stop to put dry tires. It is not mandatory, but driving in dry conditions with wet tires would be very tricky and slow.

How Do Pit Stops Work In F1?

To make a pit stop, drivers enter the pit lane. They must brake and set the speed limiter at the exact moment because if they brake earlier, they lose valuable time, and if they brake later than the line, they get a penalty.

When they stop in the pits, they must brake and place the car in the established and adequate place, since if the car is incorrectly positioned, the mechanics have to move a little and therefore waste time. Usually, only tires are changed at stops, so they last a couple of seconds. If the car has damage in the front wing, it can be changed, but it takes longer. It also takes longer if there is a problem with a wheel nut.

As for the mechanics, there are three per tire: one to operate the wheel gun, one to take the tire off, and one to put the new one back on. Ideally, they do not have to move, as both they and the equipment are in the exact position. Each mechanic usually has a fixed position during the season. There are two mechanics to lift the car and lower it back down, one at the front and one at the back.

When everything is ready, a green traffic light turns on, and the driver accelerates. As he crosses the pit lane line, he deactivates the speed limit and rejoins the race.

What Is The Maximum Number Of Pit Stops In An F1 Race?

There is no limit to the maximum number of pit stops. The strategy depends on the track and circuit conditions and whatever happens during the race. The most common is to make 1 or 2 stops, maybe 3, but more than that is unusual.

During the 2019 season, the Red Bull team, famous for their fast pit stops, broke the world record for the quickest pit stop up to 3 times.

They did it in Great Britain, with a mark of 1.91 seconds, they beat it again in Germany with 1.88 seconds and finally they did it again in Brazil, with a pit stop of 1.82 seconds, the current world record. Below we have the video of this amazing and satisfying pit stop.

Pit stops are a crucial part of racing. A good pit stop can save you time with respect to your opponents, while a bad pit stop can ruin your race. Pit stops offer greater entertainment to the races and varied strategies, making it one of the factors that most condition the races.

Louis Pretoriushttps://onestopracing.com
Previous article
How Do New Teams Enter F1?
Next article
Can You Repair Car Under Red Flag?