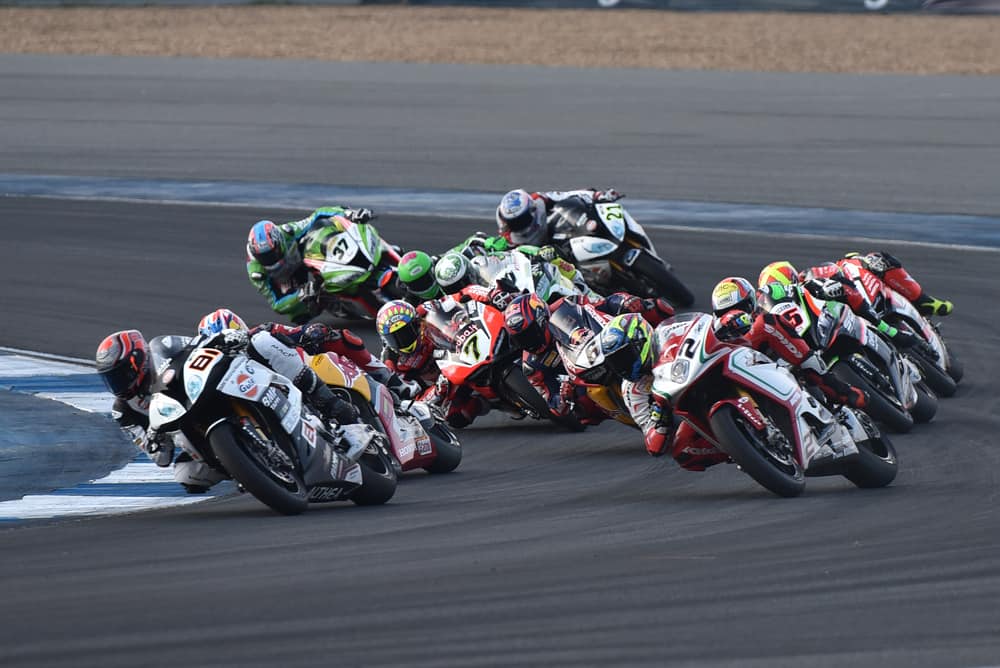 Formula 1 cars and Superbikes are among the world’s fastest accelerating vehicles. But what makes them different, and what would happen if the two vehicles were racing against each other? So, which one will prevail, An F1 Car or a Superbike!

A Formula 1 Car has a 1.6-liter Turbo Hybrid Power Unit that is capable of 1,100bhp. Superbikes have engines that range from 600cc to 1200cc with either 2, 3, or 4 cylinders in various layouts. Superbike engines can produce between 140bhp to 200bhp, with the WSBK racing bikes reaching 250bhp.

Read on to discover the difference in top speed, engines, brakes, aerodynamics, and lap times of a Formula 1 car and a Superbike.

When comparing a Formula 1 Car and a Superbike, when need to consider the similarities and differences between these immensely powerful machines. The two vehicles look vastly different from each other. They use different styles of tires, and both vehicles can easily surpass the 200 mph mark. These are just some of the exclusive attributes each speed machine has.

To ensure an accurate comparison, I have based the results on the 2022 Formula 1 car and on Superbikes and World Superbike Championship (WSBK) with a maximum engine capacity of 1200cc. So let us break it down further.

There are loads of factors that determine how fast a vehicle can speed down a long straight stretch of track, but having a powerful engine is the main factor. Both a Formula 1 car and a Superbike have powerful engines that help them achieve breakneck speeds.

The fastest speed on a Superbike in the WSBK race series was 201mph (325kph) at the Estoril race track in Portugal. The Ducati V4 Panigale was on the rev limiter when this speed was achieved, thus making the 201 mph its top speed. The fasted street legal Superbike, the supercharged Kawasaki H2R, has a claimed top speed of 240mph (380kph)

Getting off the start/finish line as quickly as possible and accelerating to get ahead of the competition is essential in racing. With all the additional electronic aids installed in these speed machines, the acceleration times are achieved with ease.

The Power-to-Weight ratio is the most accurate way to measure a vehicle’s performance. The lower the ratio, the faster the vehicle can accelerate. This ratio is calculated by dividing the engine power by the vehicle’s wet weight (kg) (P ÷ Wk = r). A Formula 1 car has a minimum weight restriction of 1720lb (790kg), while Superbikes in the WSBK is limited to 370lb (168kg).

The power output for F1 and WSBK may differ vastly between different teams and the vehicle setups. Street legal Superbikes have a set amount of power when they leave the factory.

A Formula 1 car’s aerodynamics are very different from that of a Superbike. A superbike must slip through the air with the lowest drag, so the bike can accelerate faster. This is achieved by using the faring and front scoops of the motorcycle to channel the air around the body of the bike.

The rider’s helmet, hump, and windshield are all used together is lower the drag. Most Superbikes will have a drag coefficient of 0.5 -1.0. This low drag figure roughly has the drag that a modern car will have.

A Formula 1 car uses its aerodynamics to suck or push the car down into the track surface. The more the car is pushed down, the faster the F1 car can go around corners. Increasing its cornering speed and limiting the amount of braking needed to successfully navigate the turn. Unfortunately, a higher downforce aerodynamic setup decreases the top-end speed.

To solve this, Formula 1 uses a Drag-Reduction-System (DRS). A flap in the rear wing assembly will open up when the car is in a straight line reducing drag and increasing the speed between 10 and 17 mph. A Formula 1 car has a drag coefficient of 0.7 to 1.1.

A formula 1 car has a 1.6-liter Turbo Charged V6 hybrid power unit. The power unit is used in conjunction with an electric motor that recovers energy from regen-braking and from heat produced by the turbocharger. The motor has an output of 161bhp (120 kW), and the power unit produces around 900bhp (745kw) to have a compiled power output of over 1000 horsepower.

A Formula 1 engine is capable of reaching 15,000 Rpm, but most teams will set the rev limit to 12,000 for reliability. The F1 engine has various power settings that the driver can toggle through will race. This is all done from the driver’s steering wheel.

When it comes to the Street legal Superbikes, there are very few restrictions to comply with. Thus they are able to produce much more horsepower. But, manufacturers limit the amount of horsepower to keep the engine reliable. An example of this is the Kawasaki Ninja H2 which has a 998cc supercharged inline 4 engine that produces 239bhp (178kw) at 14,00Rpm and a top speed of 210 mph (334kph).

There are not many safety features when it comes to superbikes. Most will come equipped with rider aids such as Anti-lock braking systems (ABS), traction control, wheelie assistance, and stability control. These are great, but they do not do much to keep the rider safe in an accident. The rider has to equip themselves with airbags, helmets, and personal protective clothing to prevent injuries.

Formula 1 has the added security that the driver sits in a carbon fiber tub that protects them in the event of a large impact. The F1 cars have a “Halo” device and rollover hoop to protect the driver’s head in an accident. The drivers have racing suits, helmets, and a HANS device for further protection.

The F1 car is designed to absorb impacts and shed components’ in the event of a collision. All this safety equipment has proven to keep F1 drivers safe in impacts exceeding 51 Gs.

When comparing the lap times between a Formula 1 car and a Superbike, it is evident which is faster. The Formula 1 car’s top speed is slightly faster than the Superbike. Still, the F1 cars ability to take corners at high speed allows them to do a quicker lap time. Below are six race circuits that both F1 and WSBK race on with their fastest lap times and speeds.

It is easy to see that a formula 1 car has more grip than a Superbike because it has four grippy tires compared to two. F1 uses five different tire compounds with the softest compound 1 and the hardest compound, C5. They also have wet treaded and intermediate wet tires for rainy conditions. The contact patch on each F1 tire is 6 x more than on Superbikes.

The only similarity between Formula 1 and Superbike tires is the tire manufacturer Pirelli. Pirelli manufactures tires for both racing series, but the makeup and internals are vastly different.

Superbike tires have carbon fiber rigs for rigidity and a low silica content. The tires are usually made from a single compound of rubber and carbon black to provide the best grip in dry conditions. The motorcycle tires have strong sidewalls or shoulders, allowing the rider to lean the bike into the corners for maximum speed.

A Formula 1 car has excellent brakes. The extra weight and downforce of an F1 vehicle assist it in decelerating from 200 mph to a complete standstill in less than 3 seconds. The tires keep the car on the track and pointing in the intended direction. The large brakes need to be kept in a temperature window of 700°C to 900°C for them to function correctly.

There is no ABS on the brake system, so the drivers will lock up the wheels under harsh braking. This will damage the tire by causing flat spots. The braking system works on all four wheels of an F1 car, and the drivers are able to adjust the brake bias while driving.

Superbikes are not the most stable under hard braking. It is considered an art to trail brakes correctly without falling. The majority of the braking is done with the front wheel, and the rear brake is used to stabilize the bike under braking. When a rider pulls on the front brake lever, the Superbike will have the tendency to straighten to a vertical position, thus making braking at high speeds very technical.

Superbikes need to take a corner at a much slower speed than an F1 car, so the riders need to set the bike up for each corner. This results in the rider braking much earlier than an F1 car and increasing the lap time.

A Formula 1 race car accelerates from 0 to 60 mph in 2.5 seconds and reaches 200mph in 9.9 seconds. The cars have advanced aerodynamics that allows them to take corners at very high speed and have a drag reduction system that assists them in reaching high speed on the straights. The 1.6-liter Turbo V6 engines, with the aid of an electric motor, can produce over 1100 horsepower giving them a high power-to-weight ratio.

Superbikes can accelerate from 0 to 60 mph in 3.1 seconds, and they can reach their top speed in less than 15 seconds. Superbikes do not have the same amount of aerodynamics as an F1 car, but due to their lightweight and high horsepower, they have excellent power-to-weight ratios. Superbikes can range from 600cc to 1200cc engines that can produce up to 200bhp, while the WSBK racing bikes can reach 250bhp.

When comparing lap times and top speed on the same race track, Formula 1 clearly has the upper hand with its extra grip, more powerful engine, and cornering speed. Superbikes need to slow down more for corners than F1 cars, thus resulting in higher lap times.