How Fast Were Old F1 Cars? 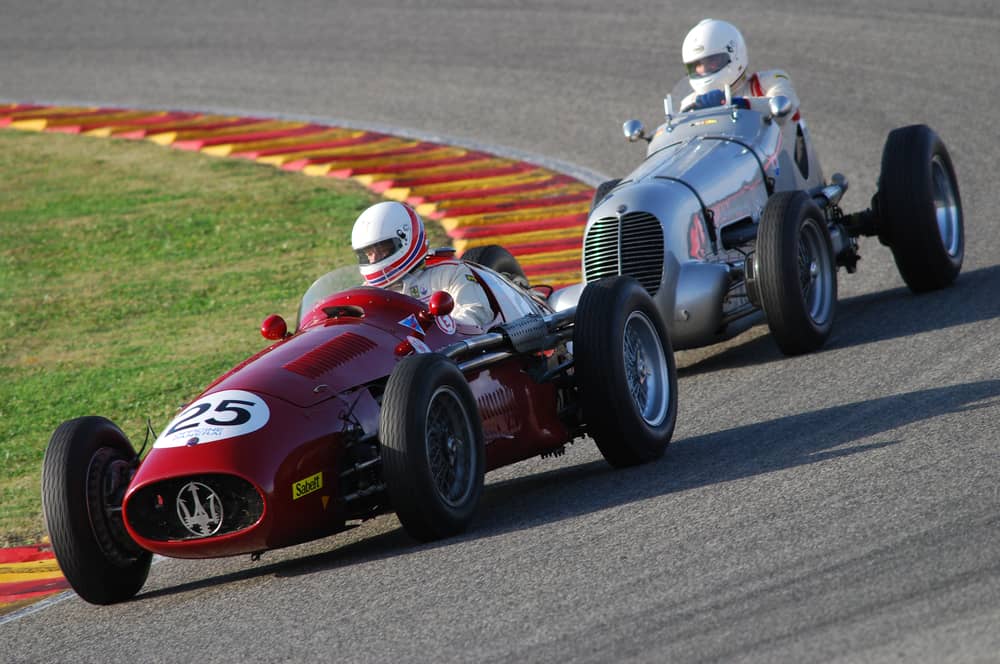 F1 is a constantly evolving sport. Technology changes very fast, and cars also evolve in appearance, handling, and speed. Much has changed since the first decades. That makes me wonder, how fast were old F1 cars?

F1 cars have become dramatically faster over time. Current F1 cars are estimated to be twice as fast as the first ones. However, old F1 cars were also quite fast. F1 cars from the 1950s and 1960s could accelerate from 0 to 100 km/h in about four seconds, and their estimated top speed was 290 km/h.

It’s quite impressive considering the technology of the time, isn’t it? Despite the decades, they are still very fast cars, although they are nothing like today’s cars. Let’s explore this fascinating topic, and hopefully, you can learn something new today.

The Evolution Of F1 Cars

From drivers in cloth helmets racing through a disused airport to the most technologically advanced sport in the world today, much has changed in F1.

Among all the changes, the most apparent and significant are those of the cars. F1 cars have undergone a significant transformation since the sport’s inception in 1950 in all respects. That makes current cars unrecognizable due to the enormous aesthetic evolution (and not only that) that they have suffered for more than seven decades.

F1 was born in 1950, and it soon became professionalized, becoming an expensive and exclusive sport, where large car brands such as Ferrari, Alfa Romeo, or Mercedes raced, not only for being the fastest but for bringing more innovations in their cars.

At first, F1 cars were aerodynamically very simple, with tubular shapes. They had their engines in the front and were powered by a 1.5-liter supercharged engine, or they were decked with a 4.5-liter aspirated engine, and their tires were narrow-tread. By 1955, they began to move the engines towards the rear to increase the speed and decrease weight.

As the decades passed, in the 60s and 70s, cars became lighter, slimmer, and faster, and many aerodynamic concepts such as wings began to be introduced. Side skirts and an underbody design began to be added in the late 1970s, helping the car gain the grip it needed to fly around corners and race down the tracks.

In 1981, the carbon fiber chassis was invented, and in the 1980s, electronic driving aids were also created to help drivers control cars better. Later, in the 1990s, semi-automatic gearboxes and traction controls were invented as well.

Cars were not only getting faster but also safer. Deaths in F1 were falling more and more thanks to technological advances and the awareness of both fans and drivers. Today, cars have the latest technology. They have very complex V6 turbo hybrid engines and highly advanced aerodynamic elements. F1 has become a relatively safe sport, although the risk will always be there.

As we have seen before, F1 cars have been getting faster and safer, thanks to technological advances, but exactly how fast have they gotten?

Below we leave a graph made by the Reddit user u/gg2443 that shows a progression of F1 lap times. The graph is done by recording the fastest lap from every race from 1950-2018 and then by comparing the current year’s lap time to the previous year’s lap time on the same track. The graph shows the performance for each year for a theoretical circuit.

We can see that the progression is abysmal. Although track layouts change slightly over time, we can get an idea of how fast today’s cars are compared to older ones. For example, Juan Manuel Fangio’s Pole Position lap around Monaco in 1956 was 1:44.0, while Charles Leclerc’s in 2021 was 1:10.346. It’s quite a significant difference.

Why Do Older F1 Cars Look Faster On TV?

Today’s F1 cars are the fastest in history. However, watching old racing videos gives the feeling that old cars are faster, but why?

Carlos Sainz is one of the drivers who has spoken about it in front of the media. He reflected:

“The [current] cars are incredible, but then you watch TV, and they don’t seem any faster than they did back then. And that’s what puts me in a bad mood and makes me nervous.

Is there something we are doing wrong with the cameras, on-camera angles, in high definition? Most people on Twitter agreed that cars, being longer and bigger, give the impression that they are going slower. “

Today’s cars’ aerodynamics and complex suspension systems make them move very smoothly on the track, so although they are faster, it seems that they are not that much. Older cars, from the 60s, 70s, or 80s, were more violent, that is, they moved everywhere, bounced, and skidded more, so there was more movement and a feeling of speed.

Another important aspect of giving the impression of speed is framing. Now, with the huge televisions we have, a four-by-three framing is used to fill the entire screen, so the picture is more squashed and wide. This makes cars appear slower. The quality and definition of the image also play an essential role. Older cameras, having worse definitions, also gave a more aggressive look.

The cameras also play an essential role because they now capture cars very well, whereas before, having worse equipment. As the cameramen were not as professionalized as they are now, it was challenging to capture the cars on many occasions.

In addition, since there were not as many security elements as walls and protective fences before, the cameramen could record the cars from closer.

And lastly, the sound is also important. The sounds of today’s V6 engines are not as good as the roars of previous V10 or V8 engines, which affects the feeling of speed.

You can judge all these aspects through the following video, which compares a lap at Monaco between Ayrton Senna in 1990 and Lewis Hamilton in 2019. What do you think?

A large number of advancements and improvements in cars have undoubtedly changed driving. Today’s F1 cars have nothing to do with those of 30 or 40 years ago, but does that mean that they are easier to drive? It is a question that many fans ask themselves and that only those who have driven both old and new cars can answer.

In some statements for F1, former driver and now commentator Martin Brundle, who has driven 40 F1 cars on circuits, has made it very clear:

“One is the physical aspect, and one is controlling the car. When we talk ‘easy,’ you have to differentiate between the two.” Current cars are physically easier to drive – but they’re not easier to keep on the track”.

Today’s cars stick more to the ground and take the corners more easily, and they are power-steering-assisted cars, making them smoother to drive. Meanwhile, older cars were more physical to drive, since it was more difficult to turn with them and the drivers had to fight with the car to keep it on the track, plus the fact that they had to be shifting gears manually all the time as there were no paddle shifters.

Another thing to keep in mind is that today’s cars allow drivers to change and manage different settings, and that is why today’s steering wheels have so many buttons for drivers to use while driving. This is a mental burden that there was not before, since drivers, apart from driving, have to think and all these configurations.

Valtteri Bottas, who has also driven both old and new F1 cars, sums it up perfectly:

“They are very different. Some things are more difficult in the 1982 car: changing gear, using the clutch, getting everything perfect while braking – the cars aren’t at the level we’re at now. But the multitasking that we have to do now, maximizing everything with the tools we have, to go further, find more performance, extract the last fraction of lap time…

No, I don’t agree that it was more difficult to drive a quick lap time in the past. It’s at least as difficult now to squeeze out the last hundredth. It’s not so simple!”

Will F1 Cars Be Even Faster In The Future?

The evolution of the speed of F1 cars has been astonishing, but will they continue to get even faster? You may be disappointed by the answer, but we have no reason to think so for now.

The 2022 regulation changes will make cars much slower, as they will be much smaller and much aerodynamically simpler, which will significantly limit downforce levels.

This will slow down the cars by 3-5 seconds, making lap times similar to cars from 2014 and 2015, the early years of the V6 turbo engines. These changes will, in theory, make cars easier to follow, which means that racing will improve.

You might think, “well, but then in the future, with another regulation change, they may be faster,” and yes, it is true, but F1 is committed to being sustainable in the long term. By 2030, F1 wants the carbon footprint of cars to be zero, so this implies that the cars are electric, and if the cars are kept small, they will not be faster than they are now.

Anything can happen in the future, of course. Maybe in 20 or 30 years, the electric motors will be very fast, but F1 will not be faster for now, at least for the next decade.

In sports and life in general, things tend to change over time. In F1, these changes are more noticeable since the very philosophy of the sport is innovation, and cars are the main focus of these changes.

Advances have made cars go from being tube-shaped to authentic works of engineering, which has been noticed a lot in speed. Still, old F1 cars were very fast for the time and can still be considered fast cars today.